It’s the same every year; all winter is spent planning our summer glow-up, from sophisticated drinks in cute bunting-strung bars through to swimming a length in a lido, only for a vitamin-D madness to take over come June. Warm tinnies on a scraggly bit of park are dubbed ‘alfresco drinking’ and fistfights break out over the last wooden bench in a dubious pub garden. But this year is going to be different; sunny days are going to be spent sipping spritzes in rooftop bars, glugging bubbles overlooking the city, and quaffing cocktails against walls of flowers - we’ve rounded up London’s prettiest rooftops, because we deserve a scorching summer of drinking.

Topping pretty much every list of rooftop bars in London, Bussey Building is an oldie but a goodie. It’s stayed grounded despite its popularity, and rather than counting on the same old outfit, has had a makeover for 2019. Alongside 360° views of London, the Peckham bar now sports candy-coloured walls, flowers dangle from beams, and there's some very fetching Aladdin-esque carpets. Cocktails all come in at £10 or under, sticking to classics such as Aperol Spritzes and Pimm’s, while food is in the hands of Rockadollar, famous for his loaded fries and pimped up burgers. 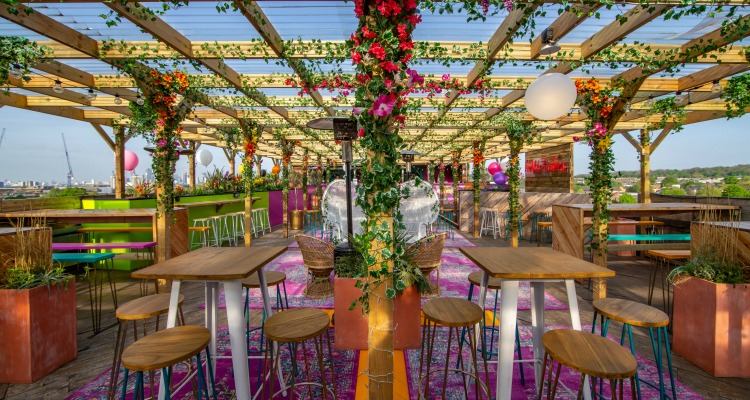 This Shoreditch hottie has had more makeovers than we've had frozen margaritas and each one is prettier than the last. This summer the seventh floor haven is paying homage to Mexico’s female Lucha Libre wrestlers in glorious technicolour, with fake shop fronts and bunting. That’s not their only move; the space also hosts exciting events curated by Paola Feregringo-Rodriguez for 2019; expect mezcal tastings, Trump pinata making and cooking classes, as well as a visit from The Rooftop Cinema. 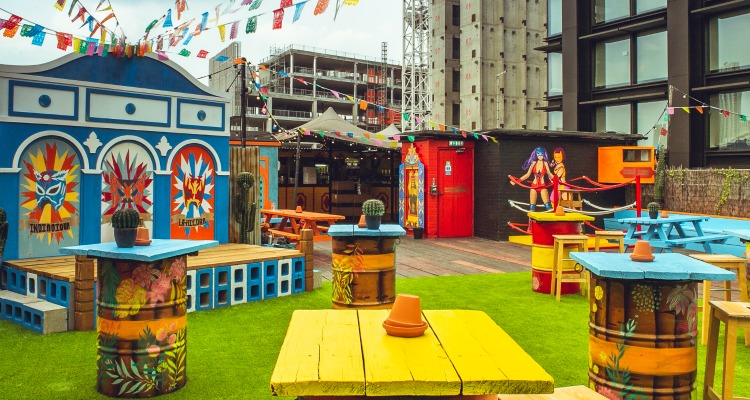 The Queen of Hoxton changes its theme every six months, and this time is bringing Mexico to Shoreditch.

There’s pretty rooftop bars, and then there’s bars that should be strapped into a diamante bikini and sent down the Victoria Secret’s runway. Pergola is in the latter camp as Incipio Group use parquet flooring, Morrocan tiles and suspended plants at their first permanent home. It’s also a great option for our summer weather, with a permanent clear roof to stop rain, and private, fauna filled booths for larger parties. But perhaps the most exciting aspect is the three hours of bottomless G&Ts that takes place every Wednesday. 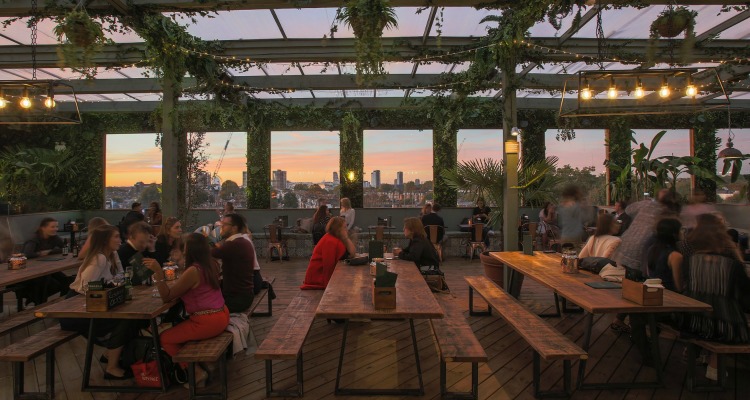 What Instagram profile is complete without a floral-filled bar and some suitable faded retro artwork? Get your pictures done at Wonderfest, Fest Camden’s rooftop terrace, as the cute spot celebrates 50 years of Woodstock and the return of Glastonbury with a festival theme. Taking the great outdoors up high, the bar has fake grass underfoot, multi-coloured umbrellas double as art pieces, and there’s the quintessential flower wall (#summer). Add in a packed schedule of live music, film screenings and DJs, and this space has got our warmer months wrapped up. 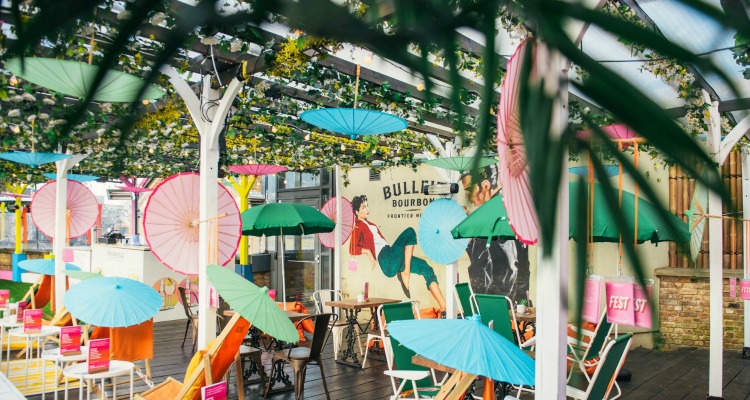 Leave the wellies at home; Wonderfest in Camden is a slick homage to famous festivals.

This former car park has swanned into Wapping’s largest - and we dare say, prettiest - rooftop. As part of Tobacco Dock, the space is huge with several areas to explore, including a croquet pitch that uses views of the City of London as its backdrop. The upper level is the place to be, with grey day beds, strings of lights and plenty of potted plants creating an urban hideaway. Cool off with their selection of refreshing cocktails - our fave being the Raspberry Rum Margarita, a fruitier take on the original which has ‘holiday’ in every slurp. 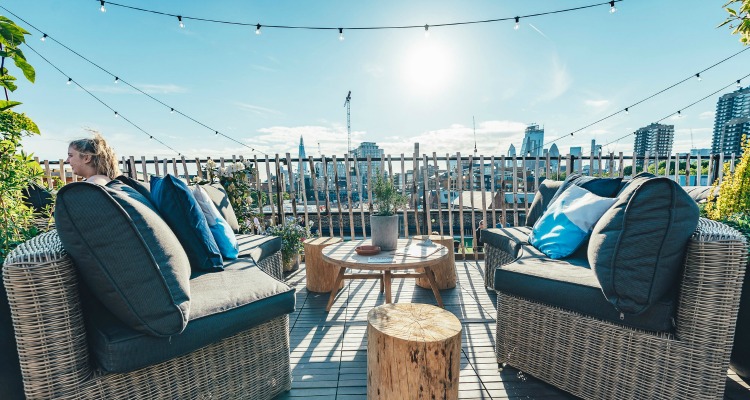 You can count on some seriously OTT visuals anywhere near central London and Alto by San Carlo at the top of Selfridges does not disappoint. Who cares if Brexit confines us to life on this tiny island when there’s the likes of this rooftop restaurant? Reached by a lemon tree-filled hallway, the space sings of Tuscany, with wisteria hanging from the retractable roof through to jars of citrus fruit on the bar. Save Alto for a special occasion, it’s more of a wine and dine kinda joint, with a long list of Italian whites and homely pasta dishes.

Italian eats and smart wines are the order of the day at Alto by San Carlo.

For more rooftop inspiration in London, check out our full list of sky-high bars here.