Yet to step a foot inside, I’d already concluded that as Peruvian cuisine in London goes, Ceviche is as good as it gets. Not only was it the first of its kind in the UK, but to be frank, you don’t name your restaurant after a national dish unless you’re pretty-damn confident that the reality out-tastes the expectation.

Rubbing shoulders with the likes of Ronnie Scott’s Jazz Club and Bar Italia on Frith Street, Ceviche has earned its place amongst Soho royalty. 5 years down the line, owner Martin Morales now has four restaurants around London; a second Ceviche (Old Street), Casita Andina and Andina. Each inspired by Peruvian culture and serving an original menu.

The subdued exterior gives away nothing of the lively, almost celebratory, atmosphere inside the Soho branch. Guests are greeted by a shack-inspired entrance (complete with a tin ceiling and wooden panelling painted in their trademark sky blue) and the walls are decorated with a mish-mash of colourful Peruvian art work. The ‘more the merrier’ seating arrangement is split into two; the front bar for those just dipping in and out and a more relaxed restaurant space for those who want to linger and soak up a taste of the Latin American lifestyle. 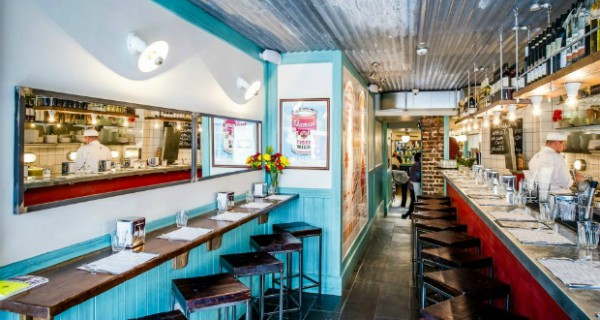 The interiors at Ceviche are as fresh and fun as the food.

Peruvian cuisine (a fusion of local produce and European and Asian influence) is all about big, bold flavours and staples such as corn, quinoa and potatoes. This is reflected in Ceviche’s tapas style menu, famed for its superfood salads, barbequed Anticucho and of course, their range of Ceviche.

You may not be familiar with all the ingredients on the menu, but here you can take a gamble and be assured that what arrives is exploding with flavour, vivid in colour and served with a touch of fine-dining flair. The Pulpo al Olivo (Marinated grilled octopus, lentils uchucuta and Peruvian black sauce) is all the above. The tentacle is juicy and plump and the grilled cooking method adds an extra edge. The bed of lentil uchucuta is a South American favourite and helps to fill out the dish which is finished off with a strikingly presented swoosh of tangy, purple sauce across the plate.

The Causa Sensación (yellowfin tuna tartar, Peruvian olive sauce, nori flakes) acts as the perfect side dish for those looking for a small bite to accompany a Pisco or two. The generous portion of silky tuna is deliciously complemented by a creamy, potato base. The Japanese influence is apparent with the appetisers styled like nigiri sushi and finished off with nori flakes.

The main attraction though is the range of Ceviche dishes, created at the in-house bar which invites customers to watch the food being prepared. For those not yet familiar with Peru’s most popular cuisine, Ceviche is a seafood dish in which the raw fish cooks from contact with citrus juices rather than heat. The menu offers 6 variations, the most popular being the Don Ceviche (sea bass, amarillo chilli tiger’s milk, limo chilli, sweet potato, red onion) which keeps a continual flow of customers through the door. The creation is bursting with a fusion of sharp, zesty flavours and from the crisp sweet potato to the soft chunks of fresh Sea Bass offers a textural contrast in every bite. Priced at a very reasonable £8, the dish has left me craving more and telling everyone who will listen about my new food-obsession.

Not only has Ceviche sparked this country’s interest in what Peruvians eat, but their drinking habits too. Under the same roof is Europe’s first dedicated Pisco bar, serving up wide range of in-house Pisco infusions and cocktails. The house classic Pisco Sour (Sol de Plata quebranta pisco, lime, sugar syrup, egg white, Peruvian Chuncho bitters) is the lightest, fluffiest sour I’ve ever tasted yet packs as sharp, sweet punch. 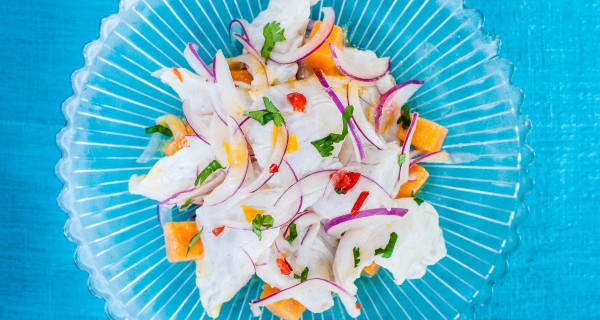 Subtly isn’t a word that you’ll hear associated with Ceviche. The flavours are bold, the presentation is enchanting and the passion for Peruvian culture shines through every drink, dish and smile served.