Having won over the Brighton dining scene with two award winning restaurants in the shape of The Coal Shed and The Salt Room, restaurateur Razak Helalat has swapped the salty sea air for a whiff of the Thames and opened a second Coal Shed at One Tower Bridge. Can he transfer that seaside success to this London spot? I headed on down to find out just that.

Just a stones-throw away from one of London’s most iconic landmarks, the river-side stroll to The Coal Shed is enough to make you fall in love with the city for the first time, or at least all over again. Passing the HMS Belfast, taking in the stunning views of the city skyline and the Tower of London, you’ll find the restaurant tucked away between City Hall and Tower Bridge and sharing a courtyard with The Bridge Theatre.

Despite large glass panelling covering the outside of the restaurant, the inside space feels intimate and cosy. Spread across two floors, each room is elegantly decorated with high-end furnishing, such as the striking Italian marble table tops. Separated off from the bar area, the downstairs dining room fuses hints of Japanese styling with modern-industrial design. The use of oak flooring and timber beams soften the iron framing of the open kitchen and creates the perfect, dimly-lit date night setting. 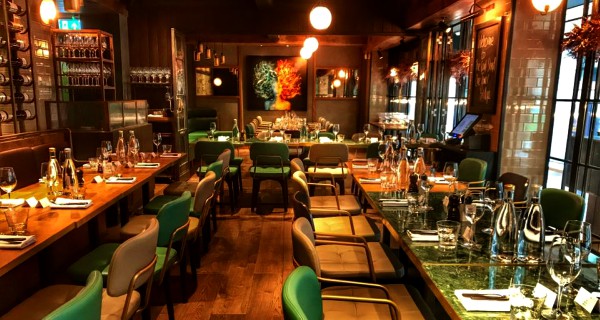 The Coal Shed blends the contemporary with a slice of the cool.

The not-so-secret success to Razak Helalat’s trio of restaurants is their passion for sourcing local, sustainable ingredients and using the traditional method of cooking on natural fire and hot coals. Menu highlights include organic, native British breed meats and ethically caught fish from the South Coast which are grilled directly over burning charcoal.

Being a cold, pre-Christmas evening, we opted for the Sharing Sunday Roast. Priced at £40, it may be a little more expensive than your average roast dinner, but it’s clear at The Coal Shed that you get both quality and quantity for your money.

The 600g black Aberdeen angus, 35 day dry-aged roast sirloin of beef was a beautiful sight to behold, and taste. The tender meat was succulent, and true to their word, the intense cooking style had kept the steak bursting with juicy flavour. To accompany the large cut of meat were beef fat potatoes, cauliflower cheese, honey roast root vegetables, seasonal greens, Yorkshire puddings and smoked gravy.

Fearing for the standard selection of hard-boiled vegetables too commonly sloppily loaded on the side of a roast, the mixture of original sides served at The Coal Shed established the meal as my favourite, yes favourite, roast to date and a lesson to other restaurants on how to get customers talking about your food. The crisp exterior of the plump potatoes gave way to a light interior which was perfectly accompanied by the tangy gravy and gigantic, fluffy Yorkshires. Sweet, purple carrots were topped with bread crumbs whilst the creamy leeks were coated in mustard to give them a kick. Nailing my personal preference of the-more-sauce-the better, the cauliflower was submerged in a pool of rich cheese sauce.

The drinks menu offers a wide range of intriguing cocktails, made up of classic’s such as the Old Fashioned and Bloody Mary, but served with a unique Coal Shed twist. The menu also boasts an intensive wine list broken down by the country. To complement our roast, we tried the Cotes du Rhone Villages, Plan de Dieu, Domaine, St Damien which was deep in colour and echoed the theme of our food: full flavoured. 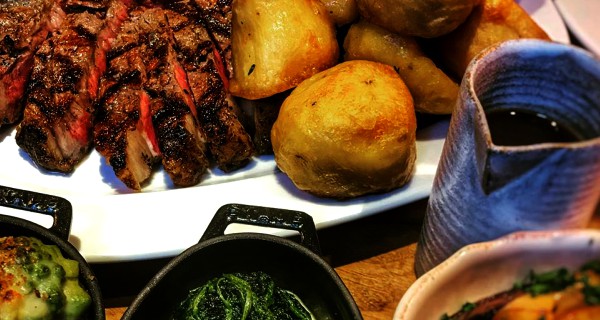 A booming roast packed with thought out flavour.

The Coal Shed made its name on the South Coast for cooking high quality, flavour packed produce over fire, and having brought this winning combination to London, I think the restaurant has the potential to become as popular in this city as the landmarks that surround it.