If you go down to the basin today you’re in for a big surprise. Once a cultural backwater, Paddington basin is fresh from a £775 million facelift which has seen thousands of office spaces, new flats and a bunch of restaurants around Merchant’s Square. Once the tired train station that gave its name to a furry bear (and wasn’t much to write home about), Paddington is being flouted as the coolest new dining destination since sliced bread. There’s a hip boating rental company, a cool scissor-like chrome bridge, deck chairs, food trucks and now, Lockhouse, a shiny all day dining restaurant. The concept’s not ground-breaking: it does street food-inspired grub alongside craft ales but when I arrive on a Tuesday evening it’s packed to the rafters. 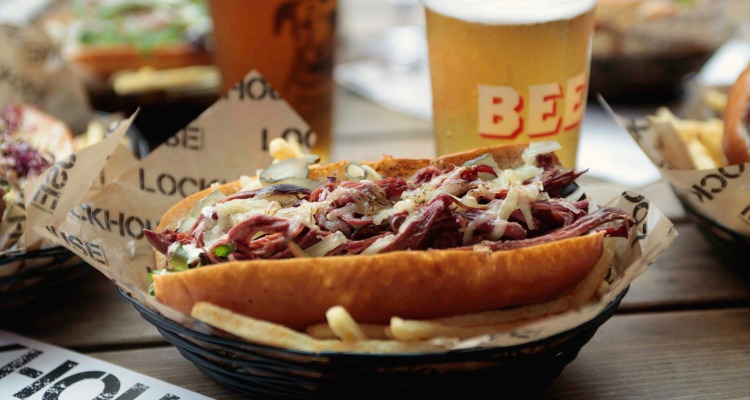 American-style dishes come in American sizes at this Paddington joint.

Inside, there’s an industrial, shipping-container style front with ‘LOCKHOUSE’ painted on, plus huge silver fans, exposed wires and polished concrete, but there’s no masking the upscale feel of this glass-fronted restaurant at the starting point of the canal. It’s warehouse-like inside: there’s tonnes of space, and packed with tie-loosened office workers, drawn, no doubt, to the excellently priced food and drink (more on that later). In the back though, it’s a bit calmer and you can have a seat in the restaurant, but book a table –they all filled up in the course of the evening.

I swerved the office party spilling out by the canal and took a seat at the bar, starting with a lavender and strawberry mojito (£9) – as equal parts fruity and floral as you might expect. The dinner menu is divided into sharing plates to start and we go for seriously heaped prawn tacos with chunky mango salsa, spinach and rocket (3 for £12). It was a tough call – other sharing plates on the menu consist of fried pickles (£4.50), fried chicken strips (£7) and halloumi fries (£6.50) and the office party in the bar seemingly ordered the whole menu to share.

These were followed by mains of garlic rotisserie chicken with baby gem and fries (£9 for a quarter/£16 for half), which was so big I had to leave half of it. It being the middle of a freak London heatwave, we skipped the burgers that Lockhouse is famous for and opt instead for the superfood salad (£9), which didn’t skimp on ingredients: there was beetroot tahini, artichokes, chargrilled broccoli, chickpea couscous, goji berries and pomegranate molasses. Everything was fresh, crunchy and light – proving that these guys do healthy just as well as they do sloppy American-style comfort food. 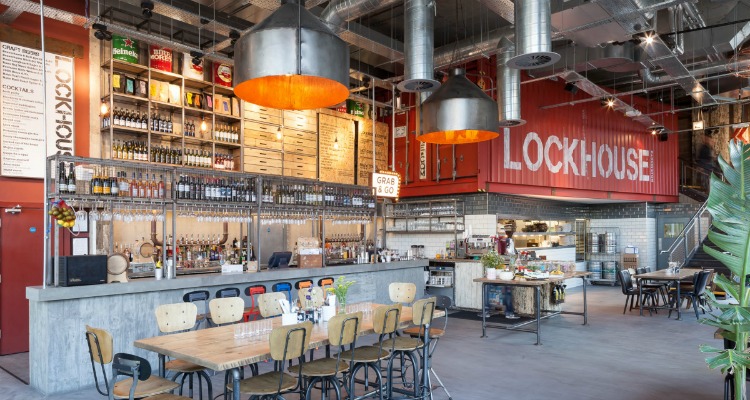 From the shipping container to exposed pipes, Lockhouse is a great after-work hangout.

There’s a lot of competition for burger joints in London these days, but what sets Lockhouse apart is that there’s American-size portions to match the American-style food. Plus, it’s a great place to bring a group of people for after-work drinks which turn into a bite (and no need for fast food before the commute home). Prices of the glasses of wine won't break the bank – £5.40 for 175ml of any glass. Combined with the great value food – the final bill might leave you thinking you’ve hopped on a train at Paddington and gone up north somewhere.

Can These Tarot-Themed Cocktails Reveal Your Deepest Darkest Desires? We Found Out

Ex-Noma Chef Is Opening A Mexican Restaurant In Central London

Can These Tarot-Themed Cocktails Reveal Your Deepest Darkest Desires? We Found Out

Ex-Noma Chef Is Opening A Mexican Restaurant In Central London