If you’re familiar with First Dates, you’ll know that Fred Sirieix is one of the country’s most lovable TV personalities. This year, he named El Pirata as one of his favourite romantic restaurants in London; and although I haven't been on his show to find the love of my life yet (stay tuned), I embraced my singledom to see if I could fall head over heels for some Spanish tapas instead.

From a first glance, you would not think El Pirata has been around for almost a quarter of a century. With the majority of restaurants failing in the first three years of opening, it has more than earned it’s reputation in the Mayfair area. Venturing down an alleyway and veering off Old Park Lane, we came face-to-face with the humble and discreet venue. Its exterior was charcoal black featuring some pretty foliage, and a collection of wooden tables sat either side of the entrance. Seated at a cosy table for two on the top floor, a myriad of colourful and modernist paintings paraded for space on the plain painted walls, all corners were bathed in a warm glow from street-style lamp posts, and a large scale bar with a smart staircase design filled the space. I can’t quite put my finger on it - it might have been the relaxed holiday-like atmosphere, it might have been the authentic food - but on the way home I had to convince myself that I was making my way back from Mayfair, not a cute little province in Spain. 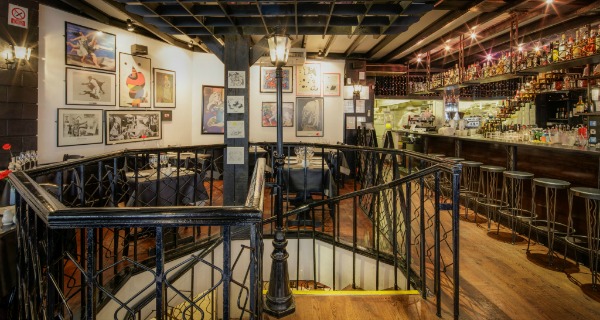 Unique paintings adorn the walls of El Pirata and a winding staircase leads to another restaurant level.

Almost 25 years in business, and El Pirata have, pretty much, kept their menu the exact same since day dot. There have been no major changes or new additions; these guys know what they do best. Starting off with a portion of padron from galacia £5.45 and montaditos de jamón serrano £5.55, we were off to a steam rolling start. The small bright green peppers were sprinkled with crystals of sea salt and the bread from the montaditos de jamón serrano was tremendously fresh. But the main event brought us thousands of miles from London’s busy streets to a sun-soaked evening in Spain. We shared pimiento relleno red pepper stuffed with vegetable risotto and cheese £5.65 and patatas bravas topped with chilli and garlic sauce £4.05. The pinchos morunos con chorizo £7.95 presented chunks of neatly stacked, juicy meat and the vuelta de carne £6.25 came out pipping hot in a pool of white wine sauce. My favourite tapas dish had to be the patatas bravas with comforting cubes of deep fried potatoes, but the calamares a la romana £7.95 was up there too with countless rings of fresh calamari piled high on a dainty plate. Starting off with a well balanced and boozy mojito, we quickly moved onto the inevitable double order of San Miguel. 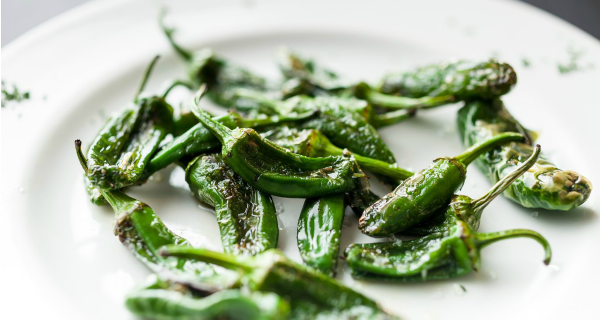 Served warm and sprinkled with sea salt, the padron peppers are an ideal dish to start your meal.

Fred Sirieix wasn’t wrong when he nominated El Pirata as one of London’s most romantic restaurants. There are 60 tapas dishes to choose from, a relaxing atmosphere to get lost in and attentive service that will humour you, no matter how many times you say ‘dos cervezas por favour’ in a shit Spanish accent. Gloriously single or sickly in love, this tapas restaurant in London is a must-visit.