Don’t know about you, but I’m a creature of habit when it comes to choosing cocktails. No matter the mood, nine times out of ten I’m ordering a margarita. So, in the interest of branching out and broadening my boozy horizon, I swung by Farzi Café to try out their new astrology-themed cocktail menu. Oh, and sampling their famous fusion plates at the same time? Don’t mind if I do. 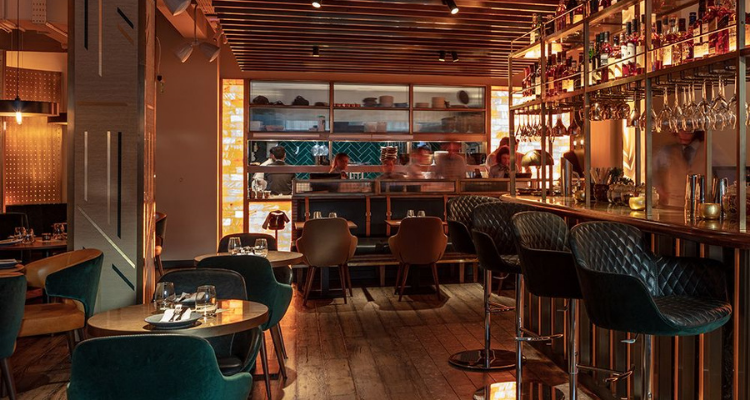 Farzi Cafe are featured in the Michelin Guide, don’t cha know. So, you’re in safe hands.

Self-proclaimed as a modern Indian bistro, Farzi Café’s location is absolutely bang on. With Theatre Royal Haymarket next door, Phantom of the Opera opposite and a short stroll from Piccadilly Circus, you’re slap bang in the middle of the action. Having opened in January 2019, the restaurant and bar is as swish as you can get. The gated terrace outside provides an ideal setting for after-work drinks, and as I peered in the window, I could see massive gold patterned leaves tumbling down from the ceiling. It was all very opulent. Inside, you’re transported to a tropical oasis that wouldn’t look out of place in Goa. The lighting channelled sunset’s gorgeous golden hour, palm prints adorned the walls and in all honesty, it felt positively balmy. The dark wood panelling contrasted the emerald velvet curtains and teal hues, plus the private booths felt seriously boujee.

We decided to take a pew on their leather stools facing the bar: a great spot to watch the swarm of expert mixologists doing their thing. Music-wise, it complimented the 1920s glam feel, think sultry jazz, lively Charleston and smooth swing. 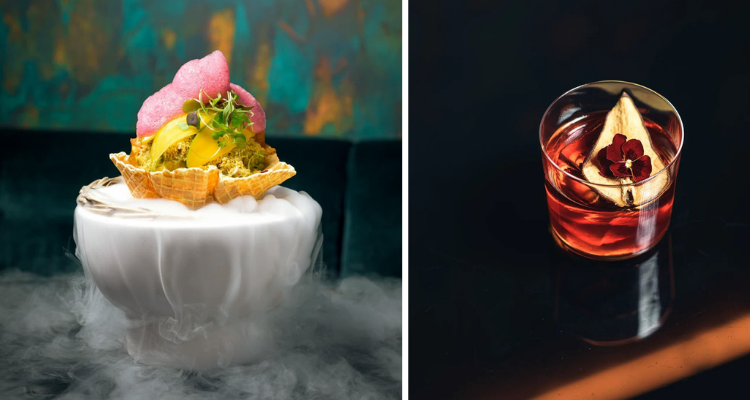 After admiring the surrounds, we picked up the little green book of astrology-themed cocktails placed on our marble-topped table and contemplated what to order. It'd be rude not to go for our star signs, so we kicked things off with a Gemini (£12) and a Capricorn (also £12). The former was a delight: fruity, fragrant with jasmine, uplifting and almost sherbety in taste. Carrying on the sweet theme, my date’s drink could be described as an upscale blue Quality Street in your mouth, sugary with coconut and salty with the popcorn accompaniment. Top tip, read all the info in the booklet, it's a fascinating explanation of each tipple, including the mystique, planets, doshas and gods according to ancient Hindu scriptures.

Food-wise, the award-winning Saurabh Udinia has curated an incredible menu, featuring cheeky twists on traditional Indian favourites. We had trouble deciding, so went for a selection of their tempting small plates. First, we tucked into the Kache Kele Ka Ragda Pattice (£11) which was unlike anything I’ve tasted before. The banana cutlet was earthy, savoury and surprisingly meaty, but the tempered pea foam and sweet yogurt gave it freshness. My fave dish was the Dal-Chawal Arancini (£11): these cute little balls were flavourful, fiery with chilli, and topped with flecks of poppadom which was a nice touch.

The most gorgeous starter I’ve ever laid eyes on.

After recommendations from the waiter, my date chose the Laal-Mirch Tandoori Chops (£19), and it turned out to be his standout meal of the night. Tender and almost creamy with the chilli yoghurt marinade, plus the extra zingyness created by the pickled onion salad, this dish is a must for all carnivores. Elevating the classic chicken dish to the next level, the Zaffrani Murg Tikka (£17) really was a taste explosion: featuring smoky cashew, saffron cream, coriander pesto and a yummy charred flavour. Next up came the Manglorian Rava Fried Prawns (£17), a pretty plate with pops of pink from the radish pickle, crunchy fried prawn alongside a dusting of gold on top. The Mumbai Vada Pav (£12) is an unusual take on a burger, with a spicy potato dumpling patty served in a pillowy soft bun. There are two, so we’d advise sharing.

Finishing with a bit of theatre, the avocado and waffle Tokri (£12) really had the wow factor. The smoking dry ice gave the dish drama, but rest assured it’s not just style over substance. The silky avo, tangy mango, crunchy waffle basket, fresh lime and candyfloss-like lemon aire were a great combination. 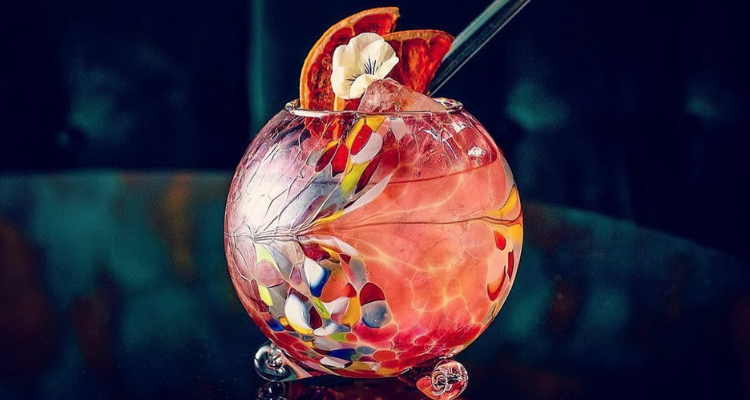 A swish cocktail bar in a perfect Central London location.

Putting out the flames from the chilli, dessert was a welcome addition. The fig and ginger pudding (£9) was not too dissimilar to a sticky toffee, but so much better. It was warm and comforting, plus the salted caramel foam and vanilla ice cream brought it all together.

You can see why Farzi Café has previously taken part in London Cocktail Week, as the drinks we sipped throughout were incredible. The Leo (£12) was simply stunning: a multi-coloured, Murano glass-eque sphere containing an almost bubblegum-y tasting liquid, but light, fruity with dried mango and made subtly bitter by the house-made amaro. We were advised to eat the chocolate accompaniment first before drinking the Scorpio (£14), as the flavours have a bit of a party when added together. Fizzy champagne, the liquorice-like star anise and boozy cognac really packed a punch, and the copper goblet kept the tipple cool and gave me Game Of Thrones vibes. Next, we tried the Libra (£12) and oh boy, was it strong. Prepare to have your socks blown off with scotch whisky and dry vermouth, but the lovely smoky dried pineapple balanced it all out. After a striking, quirky cocktail? The Sagittarius (£12) should be on your list. Served on a mural-like plate in an hourglass vessel, this drink had hints of plum and mango and the refreshing fizz matched perfectly with the Copperhead gin.

There’s an unwritten rule to avoid places right near tourist attractions as they can lack quality. But Farzi Cafe is the exception. This modern spice lounge is your go-to for high-end Indian dining and some unbelievably beautiful cocktails, decanted into the prettiest, Instagrammable glasses that’ll take pride of place on your feed. Happy snapping.

Has all this talk got you in the mood for more Indian grub? Check out London’s best restaurants over here. Keep your finger on the pulse and sign up for our weekly London newsletter.