Have we found the best vegan tacos in London? Check out our review of Jack's Bar

On the hottest day of the year so far, it was no surprise to find that most people in Southwark knew that Isabella Street harbours some terrace gems, but I was wondering if they knew about the vegan tacos and vegetarian pizzas to be found down there too? Currently on the up when it comes to London's vegan radar and already a popular craft beer spot, I wanted to get to the bottom of what makes Jack's so popular with the Waterloo wanderers.

It was clear from the off that Jack's was not only the most popular spot on the Isabella Street strip that night, they were one of the loudest. As intimidating as the initial walk-over might have been, people clearly love the terrace space, and i'm no party pooper unless you're poopin' at the party. Propped by the main entrance and able to watch the flow of punters, Jack's isn't necessarily a dining space, and I don't think it's ultimately geared to longing over a three course meal, but we were able to settle into a table alongside plenty of other 20-somethings getting their beer and burger fix.

Dark wood, bare brick, dried hops, the copper of beer barrels and casual furniture give Jack's an almost dive-bar look. It's not different and it's not 'out-there' when it comes to interiors and definitive design, but Jack's has the contemporary/industrial look that punters feel comfortable with, and they're making food that people feel comfortable with, so it's 'full circle' as an experience that Jack's does well. Fronted by Ryan and John McElhinney, Jack's is also a homage to the Jack's of Ireland that their father ran in the 1970s, so that casual, local and all-friendly feel is ever the more emphasised. 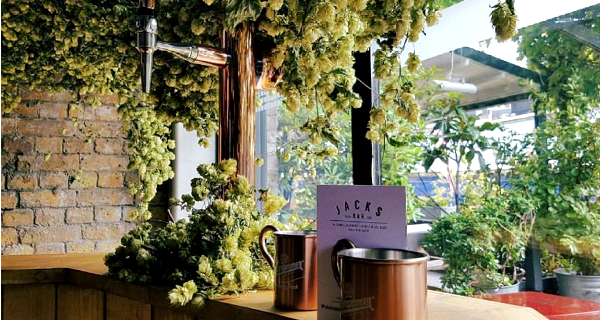 Jack's Bar is something of a hidden gem, hidden right behind Southwark station.

There's three easy things to go mad for at Jack's: the vegan menu, the craft beer and the prices. While generating a lot of Waterloo drinking traffic, it doesn't seem as though Jack's Bar has taken advantage of their popularity, offering reliable menus, prices that can be believed and menus that support their regard for casual and fun nights out.

Opting to start with cocktails and tacos, Jack's surprised us with a menu that not only caters to vegetarians and meat-eaters, it seems to also sway continents. Starting with the Caribbean Beer Battered Cod Taco with habanero sauce, the vegetarian Jerk Quinoa Broccolli Wings with sesame seeds and mango salsa (£7), then a Thai BBQ Seitan Rib taco with pickled cucumber and sriracha sauce (£7), they clearly don't scrimp on flavour or texture. Blending tart sauces with rich ingredients and the perfect amount of bite, they've taken staple vegan flavours, thrown them together, and created hearty bites that had us in applause. They also had us at 'seitan'. It was only right to pair the tacos with a global accompaniment as we tucked into a Pisco Sour with lemon juice, angostura bitters and a cherry at £8.50. Biting through the savoury tacos, Jack's Bar know how to nail a classic.

Further chuffed to close the meal with a vegetarian dish, I opted for the smoked streaky 'fake' bacon pizza with red chilli, marinara sauce and mozzarella (£8.75), while my boyfriend stomped all over a quinoa burger with smashed chickpeas, in-house vegan halloumi, lettuce and olives alongside a portion of sweet potato fries. My pizza was a hunking size for a price tag coming in under £10, promised texture with the fake bacon and plenty of bite with the chilli. The burger was impressive too, boasting a Medi-twist with the olives and patty that impressed in consistency and flavour. 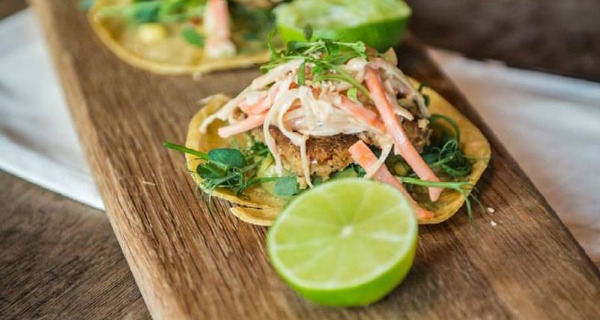 The vegan tacos are something that Jack's should sing loud and proud about.

Jack's Bar has a lot on its side; from proximity to local office spaces that give it the ultimate, after-work footfall to one of the biggest craft beer offerings in the area, but I found a lot more to Jack's than necking a few after clocking out. Offering a vegan-specific menu not only gives them meat-free anchorage in the area, they're making food that counts and they're making it well. While the layout could be more defined for diners, Jack's is a busy spot that shows no sign of slowing down.