We tested out The Test Kitchen 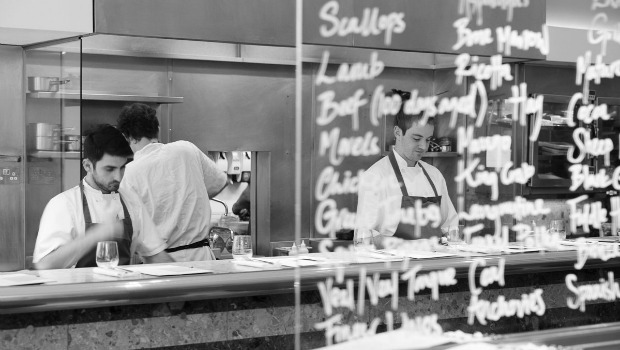 High end dining with Michelin-grade cuisine can be a downright fascinating thing to experience. Innovative cooking techniques, far-flung flavours and unpractical crockery galore - it’s all part of the fun. But for those who have ever pondered just exactly how those characteristically-complex menus are decided, there’s a new pop-up restaurant in town letting us all in on the secret; The Test Kitchen.

Located on Soho’s Frith Street for an initial one year lease, the concept is the brainchild of Good Food Guide favourite and Michelin-star stalwart, Adam Simmonds – who aims to showcase the development side of creating a menu, both by cooking the food face-to-face with diners, and also by asking his guests to leave their feedback for the dishes on a scorecard after the food, allowing the team to adapt, improve and perfect each plate.

The restaurant itself is styled around a central and seated bar, of which the chefs work behind – giving you an up-close-and-personal showcase of exactly what goes into making each item on the menu. It's buzzy, it's laid-back and even though the price-tag isn't perhaps as accessible as some restaurants, the non-stuffy atmosphere certainly is.

A constantly evolving menu, guests can select a number of small plates split into Fish, Meat, Veg and Dessert sections. We opted for a safe two dishes per section, spanning everything from a light Roasted Pearl Barley with salt baked celeriac and truffle (£7) and Scallop Ceviche with green asparagus, avocado and caviar (£13), to a meaty Cured Red Mullet plate served with green tomatoes (£13). Speedily plated, each dish is as intricately balanced as it is beautiful – with the added novelty of being able to watch the chefs prepare something so dainty and flavourful right under your nose. Highlights on my visit were the Ceviche and Red Mullet dishes above - both carefully-balanced with a decent amount of bite - and the star on the night, the 80 Day Aged Sirloin of Beef (£16), a plate with real depth, with the saltiness of the steak being perfectly matched by the sweetness of rich date and lip-smacking bone marrow. It's worth noting that not all of the dishes hit the mark on the night, but the beauty is you're encouraged to share that in your feedback form, which gives the team the options of 1) ignoring you, or 2) taking it on board and amending the dish for next time. There's really no right or wrong way to do it.

The trick here - as is the development kitchen way – is to try as much as you can, and the small-sized portions allow for that. Though it’s pricey, The Test Kitchen is a great way to experiment with high end, innovative food, and Simmonds has created a genuinely unpretentious setting to do so, at the same time as really making diners feel like they’re part of the process.