Forget reality TV stars and Hollywood actors because I’m all about the celebrity chefs. Recently, I took my mum out for dinner and the chef came to our table to say hello… he shook my hand and I almost died. Don’t think Brad Pitt would even have that effect. So when the chance to get stuck into brunch at temper arose, I just couldn’t say no.

Founded by acclaimed chef Neil Rankin, temper forms a trio of barbecue-centred restaurants. And with experience at Pitt Cue, Barbecoa and Smokehouse under his belt, it’s safe to say that @frontlinechef knows a thing or two about smoked meat. Sure, he probably wouldn’t actually be at the restaurant, but we trotted off to The City for 90 minutes of free-flowing booze all-you-can-eat bites.

Nestled slap-bang between Bank and Liverpool Street stations, temper City had me conjuring up images of men in suits and leathery décor. Only half right, we were greeted by high ceilings, striking leather booths, a huge open kitchen with barstool seating. With the rugby screened in the morning, city boys had been replaced with a huge table of muscly guys on one side of us and boozed-up girls on the other. 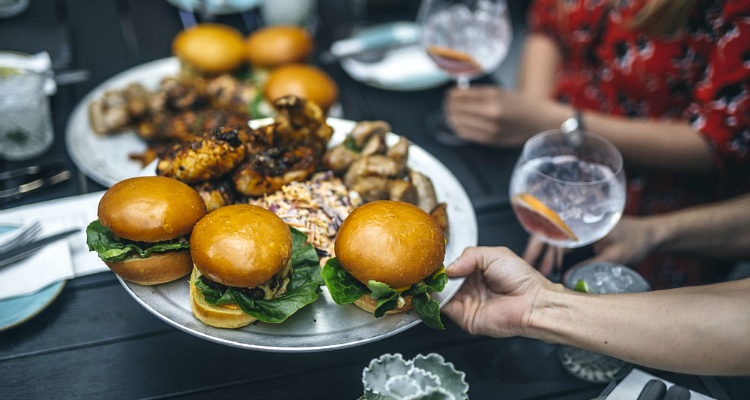 Skipping the wine and lager, we went straight for the cocktails; a couple of temper marys to be exact. Not missing a beat, our waiter was over to replace our glasses as soon as they ran dry. Moving onto mojitos, they were less lime and mint, more lemon and soda – almost like a boozy lemonade. Not quite what we were expecting (and not my dining date's favourite) but so drinkable that I could easily down a few.

As for the brunch platter itself, the menu lists 6 items; though we were only given 5 as kimchi slaw and burnt corn appeared to be blended into one. Mexican buffalo chicken was wonderfully meaty; juicy on the inside and fried to perfection, while Cumberland sausages were given the temper facelift with honey, chilli salt and sesame. Matched with the slaw/corn combo, meat sweats were gently avoided. 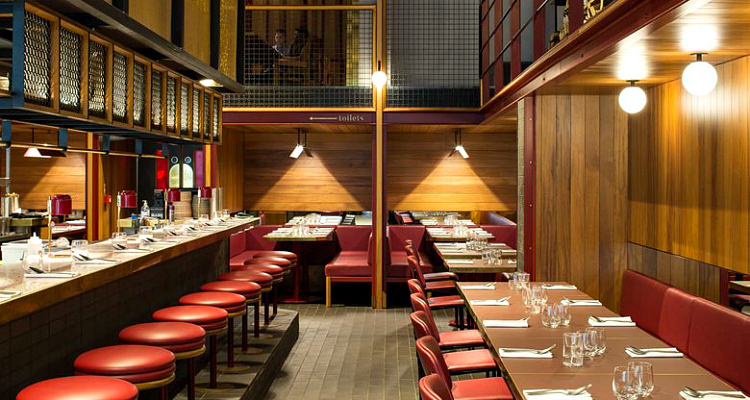 There's a lotta leather at this City spot.

Just as they should be, margaritas beautifully married tequila and triple sec with lime and a salt rim. A tipple that I often steer clear of (due to its noughties Carrie Bradshaw feels), the cosmopolitan was actually quite an impressive sip. Slightly more limey than usual, the pink drink was just to my taste… and absolutely needed for what was to come next.

For a restaurant renowned for its meat, we were let down by the simple beef burger; so dry that we couldn’t finish one, let alone order another. With a lack of sauce to desert-dry meat and paired with skinny chips were similarly fried to a crisp - no bend, just snap. At least there was the option to order more of everything else.

When it comes to bottomless brunching, there’s more to a meal than a simple eggs benny and prosecco and temper knows it. Not only are there a bunch of twists on classic cocktails, but waiters are really on the ball when it comes to replacing your glass. You won’t go thirsty here. For full marks? Those burgers and chips could definitely do with the same attention that the kitchen gives to its more experimental dishes.

Temper’s bottomless barbecue brunch costs £35 per person and is available from 12pm to 3.30pm on Saturdays.