More than just sushi? Our night in the new Gin Garden at Inamo Camden

If you’ve ever heard of Inamo, you’ll know it for one thing: the interactive dinner tables. But alas, their Camden location has another far more intriguing novelty: a serene Gin Garden... right in the thick of it.

We arrived at Inamo Camden (found right outside Mornington Crescent tube station) at around quarter to seven on a glorious summery evening to find the restaurant bathed in darkness; glowing tables were surrounded by hunched over diners playing games on the surface of their tables, or ordering their food with the use of a tablet.

While keen to have a play with the tables ourselves, like true Brits we decided to lap up the last of the summer sun in the outside seating area.

Main road schmain road, the Gin Garden at Inamo is a world away.

All good meals should start with a celebratory cocktail and since we were sat in the Gin Garden, we felt it only appropriate to try Inamo’s top-shelf gin offering. I’m not a huge fan of gin, but the citrus-twang of Japan's Ki No Bi from the Kyoto Distillery may have converted me. Mixed with tonic, lemon and lemongrass, it was our first order of the night, liking it so much that we didn’t deviate away from it for the rest of our visit. It’s a super smooth and simple cocktail on the right side of refreshing,and will whet any citrus lovers palate for the feast ahead.

Inamo’s food menu is Pan-Asian (with a particular focus on Japanese cuisine) so you can travel throughout the continent all within the space of one sitting. All of the dinner dishes are made with sharing in mind so only take people you like and/or people who you share a love of similar dishes with, otherwise you’ll be arguing over whose Char Siu bun is whose.

We started with the beef tataki (£12.95), which came in a pool of lightly sweet sauce but was almost fully cooked through, rather than the rare slices of flavour that I was expecting. The Singapore noodles at £15.45 were plentiful, yet more filler than killer and the larger-than-most Char Siu buns (£8.95) were a great sugary interlude, the sauce was a little uninspired.

Our favourite of the dishes on the night was the Spider Roll (£13.95); well-presented, with a generous mountain of pungent pickled ginger to accompany, the soft shell crab was just the right side of crispy and the roll maintained integrity.

The half crispy duck with five spice (£25.95) was also a top contendor. While there was a fair amount of fat and soft, not crispy skin, it was a generous plateful which probably should have been shared between four rather than a greedy two and we ended up asking for more pancakes in order to get through all the meat. The plum sauce was deep and flavourful - we ended up lapping up the stuff.

Overly stuffed with food, we forewent dessert, choosing to end our meal with a game of Ping on the tables inside rather than force ourselves into Chocolate Fizz Dessert or an Inane Candy Floss Garden. 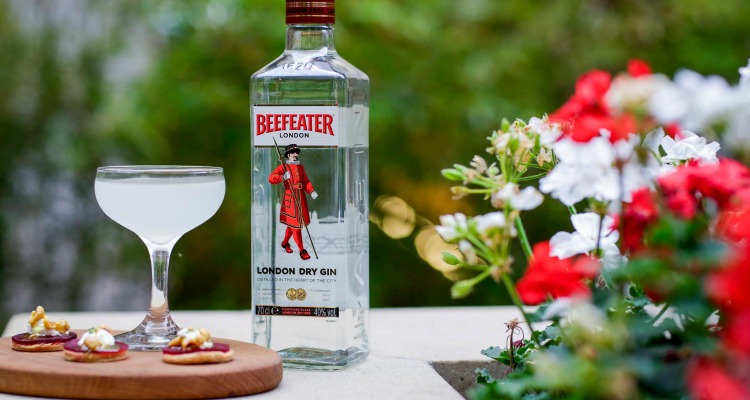 Try a world of gin, from Britain to Japan.

While the food at Inamo is sometimes more style than substance, we very much enjoyed our visit. From their position outside of Koko and the novelty of the interactive dinner tables, to the call of a Gin Garden that almost no Londoner will be able to ignore, i'm pretty sure that the crowds are always in constant supply and if I’m in the area, I’d certainly pop back in the hopes of trying the elusive Dragon Roll.