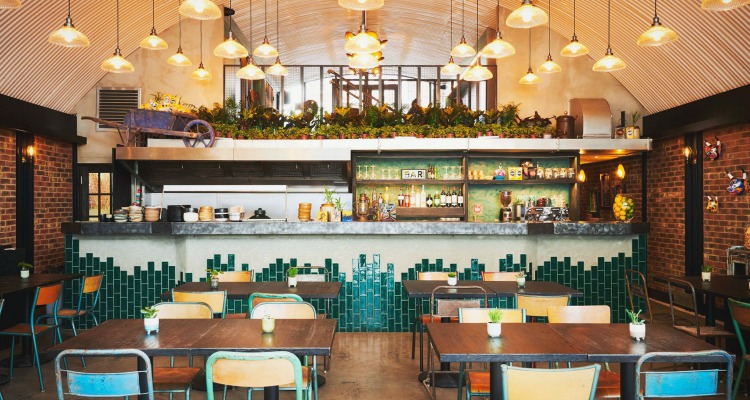 Arepa and Co has opened a second Venezuelan restaurant in the arches of Bethnal Green's Paradise Row.

On the surface, Paradise Row doesn’t look very paradisiacal, what with the neighbouring building site and the BP Garage at the end. But I’m all for self-aggrandisement, cause if you can’t love yourself, how the hell you gonna love somebody else? And in a few short years, this area has bloomed with Bethnal Green now the choice location of some of the city’s best cocktail bars (Nola just pitched up on Roman Road). Joining the likes of Mother Kelly’s and London Cocktail Club, Arepa and Co have taken over one of the railway arches for their second Venezuelan offering.

I know Paradise Row and I know it well, from swinging lampshades in industrial style LCC, through to ordering something crafty in bare-as-bones Mother Kelly. So the new Arepa and Co was a surprise; the restaurant has foregone the minimalist interiors that pervades the other arches, instead creating a homely little dome. Exposed red brick, glowing orb-like lights and a white and jade green tiled bar all gave the sense that we were somewhere much warmer than East London.

Arepa and Co was the brainchild of Venezuelan couple Gus and Kathe Salguero and quickly became a stalwart for brunch in Haggerston. Much the same is on offer with the second opening, however, there’s also an extended dinner menu, with arepas, meat plates and starters. Bunuelos (£5) were my first introduction to this type of South American cuisine, and what a way to say hello; yucca - a soft, almost gooey root vegetable - was covered in tangy goats cheese, chilli flakes and sugar cane syrup.

Good enough to name a restaurant after, arepas were up next; our choice of Pabellon (£7.95) was a fluffy cornbread (the arepas) stuffed with pulled brisket, a black bean sauce and cheese. The restaurant could also be called Cachapas in my opinion, as a corn-based Cachapa pancake (£8) was slathered in cream cheese, truffle and topped with chunks of roasted potato, kale, honey and chilli. Cocktails are as flavoursome as the food; Beso Des Diablos (£9) was potent enough to blast through my cold first with a taste of apple and lychee, finishing with a bite of chilli. From unusual cocktails to affordable and homely dishes, Arepa & Co Bethnal Green is a brilliant addition to this cool stretch of East London.