Herne Hill may be the yummy mummy of London, and a world away from the shipping containers and back-alley cocktail bars of Brixton, but there's an undeniable charm here. From the early morning flower shops to all the brunch and babies that Britain can muster, it's definitely a space where dog walkers would lap up a spring afternoon. Home to the newly refurbished Half Moon, we walked south to see what could make this gastro pub and boutique hotel stand out from the already loved locals.

The Venue and Experience

Found on the corner of Herne Hill, just shy of the main park, I know that Half Moon was a favourite for live music before its refurb, but it doesn't seem to have slowed down punters since buffing up. With garden spaces at both the front and back busy, we headed to the dining space for dinner (found just shy of the main pub). I'd have to say that the dining space was my favourite out of them all. Greenery interrupted the room, while glass, air planters, copper piping, white textures, rich furniture and succulents gave the space a luxe-lift, taking the space away from ordinary dining, and transforming it into somewhere with prosperous attitude.

After our meal we were led to the pièce de résistance, and that's the pub's main hotel suite: The Armstrong. With all the rooms in the building named after contributors to space exploration, we were in for the ultimate night. Split between main bed, living space, en-suite bathroom and a roll-top tub behind the bed (I.KNOW.), The Armstrong is luxury made cool, and the attention to detail was stunning. From books detailing astrology throughout time and a Marshall amp for our phones, to safe box, vintage furniture and our own bath robes, I don't think i've ever slept that well, and i've had 27 years to find out. 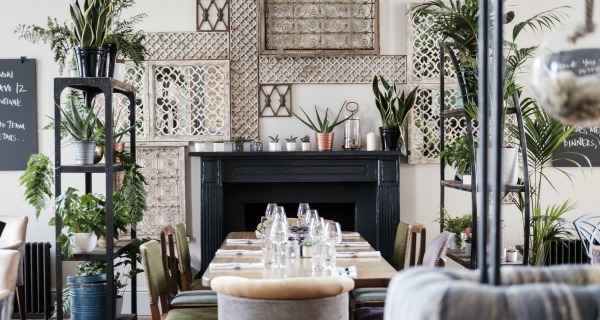 The dining space is a mix of Scandi simplicity and pub plush.

Seeing as Half Moon is so damned attractive these days, it's no surprise to see that their menu echoes the same. With the Fuller's name on their side, it's clear that they want to cater for the British market, and show London what's what when it comes to homegrown and honest ingredients. Two stand-out dishes from the off were the starters of goats cheese and pumpkin tart with walnut salad £7 alongside garlic wild mushrooms, toasted brioche, poached egg, hollandaise at £8. While anywhere would normally have me at goats cheese, Half Moon have created a starter that utilised the flavour like i've never had before. While the pastry casing had perfect bite, it's the soft blend of pumpkin mixed with the bashful goats cheese that created a moreish and savoury bite. The wild mushrooms were more than enough to write home about too; rich with an attractive hollandaise, my boyfriend hailed it as his favourite plate in the city so far, and he's been in the city 8 years.

Excited by our starters, and ready to pair our bottle of house white with more plates, we opted for the spiced roasted cauliflower with chickpea, herbs and pine nuts alongside the Frontier-battered cod, triple-cooked chips, mushy peas and tartare sauce at £12.50. While the cauliflower unfortunately lacked depth, and really should have played up to the spiced element, it's fish and chips that didn't falter. While the Frontier addition to the batter added a lovely depth, the chips and tartare sauce plumped up the dish perfectly, showing that Half Moon can take a classic and still give it British-thwack.

With all that goats cheese already hugging my stomach, we thought it only right to call for a cheese-board. Only right. With Cropwell Stilton, Croxton Manor Brie and Black Bomber Cheddar, this was not only more than suited to the £8 tag due to its emphasis on country flavours, it closed perfectly with the chutney and a couple of glasses of prosecco. 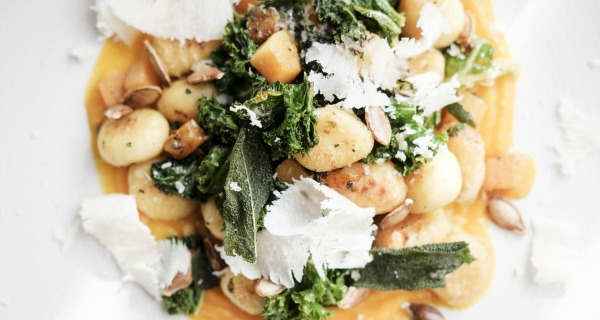 Gastro dishes at The Half Moon are emphasised with strong flavour and fresh ingredients.

I am head over heels for the Half Moon. Not only is their star-led theme both succinct and done with a charmed subtlety, they're undeniably gastro. From the curation of fresh, British plates down to their outstanding main suite, Half Moon have put together a popular and working hotel pub that'll leave you with your head in the stars. And yes, that's a space reference.