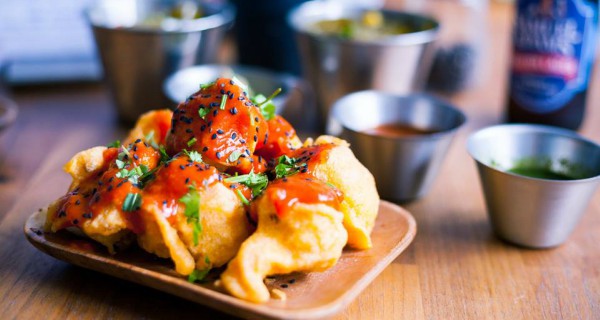 It's tucked alongside Stepney Green tube station, it's a simple space with Stateside charm, and it's bringing its A game when it comes to vegetarian food in the city. Joined by the lovely Luisa Christie, whose love of vegan dining knows no bound, we were excited to see how 90 Degree Melt have taken chunky, American classics, and made them a must for those that love the meat-free.

This intimate, almost cafe-like space is an all hands on deck kind of affair, so we launched our attack on the menu. Between us, we tried the battered corn dogs with vegan sausages and a coriander garnish £5.95, the cauliflower 'buffalo chicken' wings with a yoghurt dipping sauce (also £5.95, the vegan mac & cheese (£4.50), Southern biscuits at £2 with a vegan gravy, and two 'Spa-artichoke Melts' with creamy spinach at £4 each.

A good reason to order big at 90 Degree Melt? You're going to want more of everything. While the corn dogs were plump and perfectly topped with a tart mustard, the vegan mac and cheese was luxurious and came with a bite of green chilli alongside rich and humble toasties that practically gave meaning to the art of bread and filling. My highest praise? That however, goes to the buffalo wings. With a kick from the buffalo sauce alongside the perfect crunch of the cauliflower, these were a testament to what 90 Degree Melt are trying to do, and that's make me spend all of my money on them.

90 Degree Melt can be found at 235 Mile End Road, London, E1 4AA. Head on down to this hidden gem for some of the best vegan and vegetarian food in London such as toasties, biscuits with vegan gravy and more.

Sand and the City: The Best Urban Beaches in London