I'd be lying if I said that I was ever the kind of person, teenager or young woman whose getaway extended to tents in fields or hostels; I've always been a hotel person and I don't care who knows it. So how do you sell a hotel to someone who is already a hotel person... and probably doesn't need convincing? You send them to The Stratford. 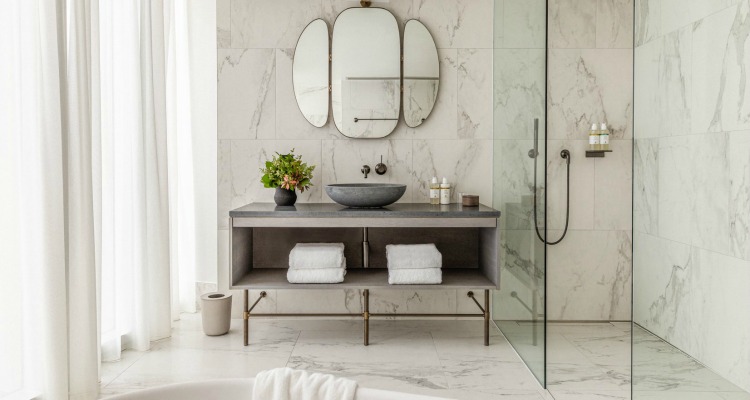 Marble that even Michelangelo would be envious of.

Marketing as its own landmark, with only the first 7 floors dedicated to hotel rooms (trendy apartments and lofts loom above), The Stratford is epic and comfortable in equal measure as we glide through the lobby and up to the Stratford Suite. It's obvious from the off that a Scandinavian company are behind the interiors; flushing out the bedroom with pebble tones, simple trinkets and natural elements that calm the soul almost immediately, Space Copenhagen have turned crisp linen, stark black bathroom fittings and an almost space-like bathtub in to a thing of simple serenity. Like I told you, I'm a hotel person.

A quick spruce of my wind-torn hair amongst the pristine bathroom marble and my husband and I were off for cocktails in the lobby, a space that all too well echoes the slow and steady appeal of the hotel; think a roaring fireplace wrapped in a smart glass box, spenny Japanese whisky bottles making their mark on the back bar and expertly mixed drinks. Broken down in to re-imagined, signature and 'Euphoric' cocktails, the options are humbled (and as zero-waste as possible) as I tuck in to an almost Pornstar Martini-esque mix in a neat and petite coupette before our reservation at on-site restaurant, Allegra. 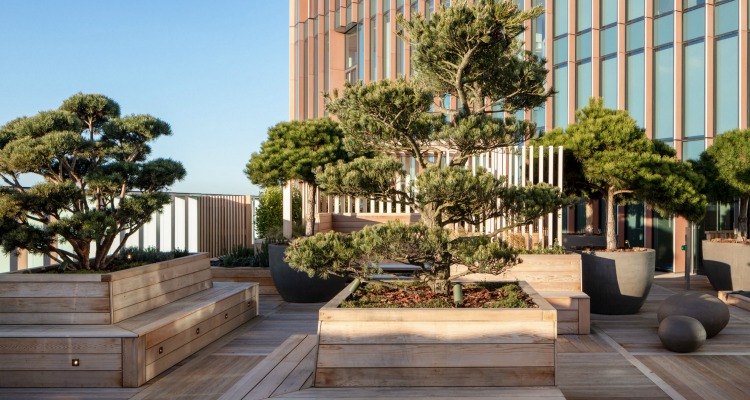 Hidden above the shops and bus stops? A slick green space.

Just a few floors above the lobby and nestled in to the hotel with its own garden rooftop balcony (sadly closed on the night due to high storm winds and building work), Allegra evokes 'timeless grandeur of a Scandinavian farmhouse', once again satiating any hotel guest's need for clean lines and muted tones. The food however? Muted it is not. An all-out European selection with Patrick Powell at the helm, ingredients are sourced from a farm just 40 miles away, on a concise menu that sings of glamour.

Thinly sliced raw and pickled vegetables impress us first, as we dip delicate carrot slices, radicchio wedges and more in to a goat's cheese foam topped with a black olive crumb, all before a Tunworth cheese, pickled pear and baked onion tart (£12) takes the stage. The trick to making the simple impeccable? You'll have to ask Patrick on that one.

It's the Peterhead cod (£26) that adds a little drama to dinner next as a deep bowl filled with baby turnip bites and delicate fresh fish are slightly sunken by a warming, but not overpowering chamomile broth. It's my husband's sourdough pain perdu with confit egg and wild mushrooms however that howls with a sweet and salty richness that could cut through any sour night. Need to add a little weight to your meal at Allergra? I'd also recommend a side of the pink fir apple potatoes (£5). 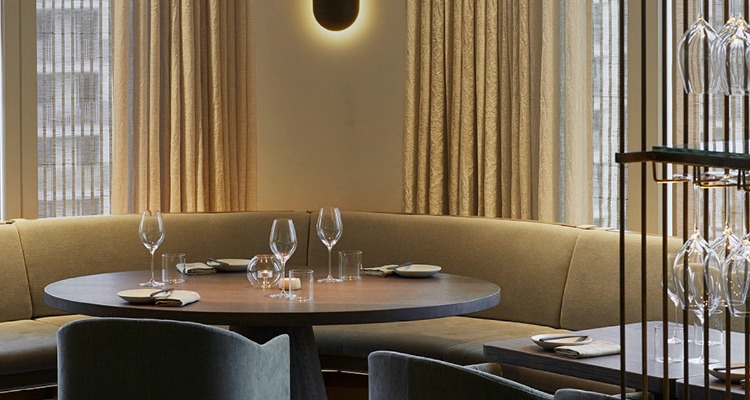 Allegra is the cherry on top.

While our passionate waiter was all too keen on passing a dessert past our lips (options include confit apple mille-feuille and treacle cake), we closed the show with an Espresso Martini before heading back to the bedroom for an embarrassing amount of 'Just Tattoo Of Us' before a killer kip.

It's easy to get wrapped up in the excitement of a hotel, the towels are significantly fluffier, the pillows admittedly plumper and well... I don't have dimmable bedroom light in Clapham, but The Stratford is worthy of your excitement. A staycation-supreme where the food is just as glamourous as the interiors, it's a beacon of premium design and hospitality in an area where shoe shops and a faint echo of the Olympics are often considered king. I for one? LOVE IT.

For more gorgeous hotels in London, check out our guide to the rooms with a view.