The London Restaurant Making Burgers In A Disused Train Carriage 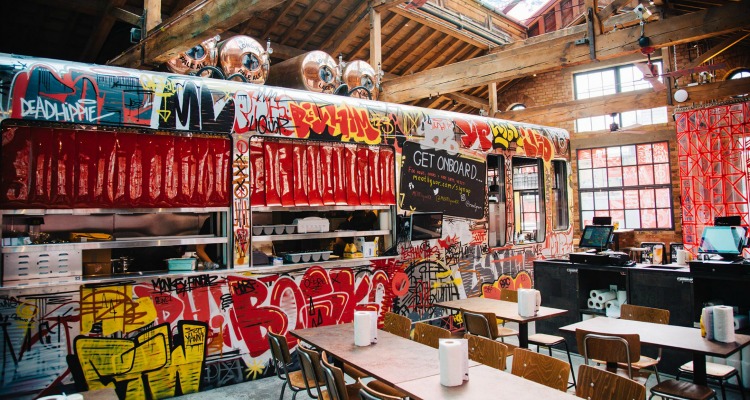 MEATliquor once again bring the attitude with their King's Cross spot.

Other than on a tripod grill during a weekend in the countryside, I haven't cooked in very many interesting places. But MEATliquor in King's Cross have bagged themselves quite the kitchen.

Rustling up hunking great patties in a disused train carriage, MEATliquor have set out to make a statement at their North London restaurant, as the graffiti-smothered commuter beacon takes centre stage in a converted warehouse spot, a mere 5 minutes away from the major rail hub.

We arrive to a surprisingly packed restaurant, considering its off the beaten track location, and ESPECIALLY because it was 7pm on a Sunday night. But alas, Londoners were out in their droves for a taste of the big American flavours that MEATliquor are so notorious for.

My vegetarian options showcased that MEATliquor don't just rely on their namesake as seitan fingers, covered in a crunchy, Rice Krispie base (£8) still boasted the buffalo punch that their already well known monkey fingers are so beloved for, while fried pickles with a blue cheese dip (£3.75) and deep fried mac 'n' cheese bites lasted a mere minutes in front of my husband and I.

Drinks highlight of the night? Pernod absinthe, lemon juice and watermelon in a glass pipe (£6). Why? Because why not... and because once again, MEATliquor don't do anything by halves.

Living For The Weekend: The Best Brunch Deliveries In London

A Way To Make London's Best Bacon Butty At Home? We've Found It