Mexican dining has come on leaps and bounds since the days of Old El Paso meal kits and stodgy cheese Tex Mex, so I jumped at the chance to sample some of London’s finest taquerias as the winner of DesignMyNight’s first ever Taste Tester competition. On a culinary trip from Baja California through Mexico City to Oaxaca, with a little fusion flair thrown in for good measure, I rounded up a few mates to visit five of London’s finest Mexican-inspired eateries. If only London’s weather and beaches could compete.

First up: El Pastor. Named after the famous Al Pastor taco, the restaurant aims to bring a taste of Mexico City to its four London locations. We visited the original location under the railway arches at Borough Market, busy and atmospheric. It’s a concise menu, offering a selection of tostadas and ceviche to start, with tacos or sharing plates to follow. The guacamole is freshly made and flavoursome (no dried out old supermarket avocados here) and the sea bass ceviche was a delightfully piquant opening dish and one of the highlights on the menu.

We shared a selection of tacos, including the namesake Al Pastor, prawn, baja and mushroom all of which were tasty, with the seafood options being the more creatively flavoursome of the selection. Short rib was visually appealing and melt-in-your-mouth tender, but lacked depth of flavour. It was more than made up for by stuffed poblano chilli - another standout. Be sure to save room for dessert, with the chocolate mole tart combining traditional Mexican chocolate chilli with salted caramel ice cream. The crowd favourite was corn cake; a robust, homestyle cake served with corn ice cream. To complement? Something from the extensive margarita menu, of course. Think frozen and served on the rocks. 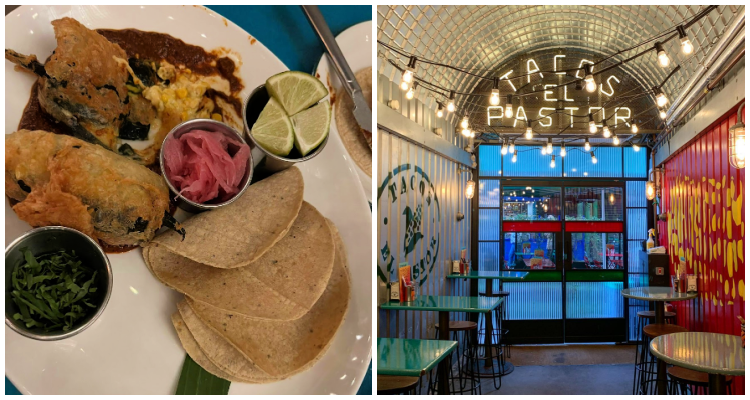 You can't miss the namesake taco at El Pastor.

Maya at The Hoxton

Probably somewhat foolishly, we visited Maya at The Hoxton the following day for a late lunch/early dinner. Set atop The Hoxton hotel in Shoreditch, it’s a New York-esque rooftop with stunning views, an extensive tequila list, and a bit more of a party vibe than I was prepared for after all the margaritas the night before. Saturday features a bottomless brunch and DJ so our 5pm booking caught the tail end of the afternoon’s festivities which was not quite the pleasant dining experience we’d been expecting (though absolutely charming waitstaff did their upmost to calm the rowdier guests).

From the smalls menu, the mushroom quesadilla was serviceable though greasy; tostada de esparragos slightly bland, with the slightly woody stalks failing to compliment the crunch of the tostada; the spicy tuna tosada was a success. On the tacos, the only vegetarian option was out but the Baja cod was light and crispy, with a tangy salsa and mayo combo - probably my favourite dish. From the mains. the diablo chicken was tender and spicy with a fresh fennel salad to offset the habanero, though possibly it could have been cooked a few moments longer. The enchilada was beautifully presented in a stunning bright rend piquillo pepper sauce and an array of edible flours. If you were after a hot brunch spot with a clubby vibe I think you’d have a great time, but I wouldn’t necessarily rush back for the food. 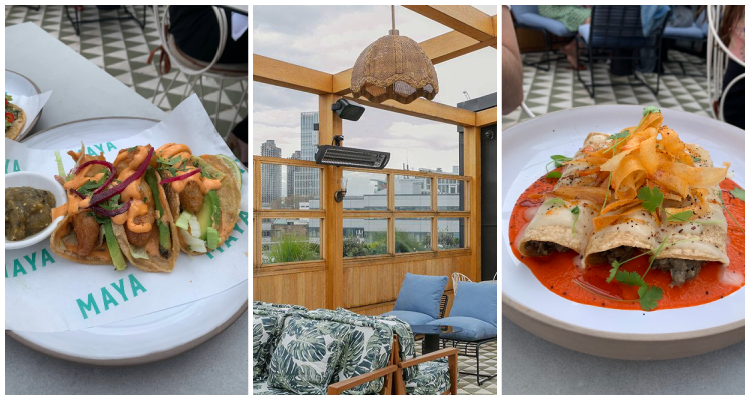 Maya is a gorgeous rooftop restaurant in Shoreditch.

While I wouldn’t necessarily describe temper as Mexican restaurant per se, it is a spectacle - fusing barbeque with Mexican and Asian flavours. Not one for vegetarians, the Soho restaurant presents as a window full of enormous dry aging steaks and takes you downstairs into a cavernous basement filled with a giant fire pit. Our group of six elected to instead go for the novelty of ordering one of everything on the menu.

As for drinks, there’s an extensive selection of special cocktails and margaritas that add a twist add to the fusion flair. On the food menu, low points were the burrata which seemed to belong to a different restaurant entirely, and the beef brisket which was tough and dry. These blips were more than made up for by juicy, kofte-like beef skewers and a chicken-dukkah carnita served on fresh corn tacos, a burnt squash with a rich mole sauce, and huge chilli and garlic prawns. Of the four tacos - cheeseburger, goats cheese, cochinita pibil and crab - it was the goat's cheese that stood out with its tangy flavours. The dessert menu also didn’t disappoint; we loved the soft, melty chocolate chip cookie served hot in a frying pan with fior di latte ice cream. 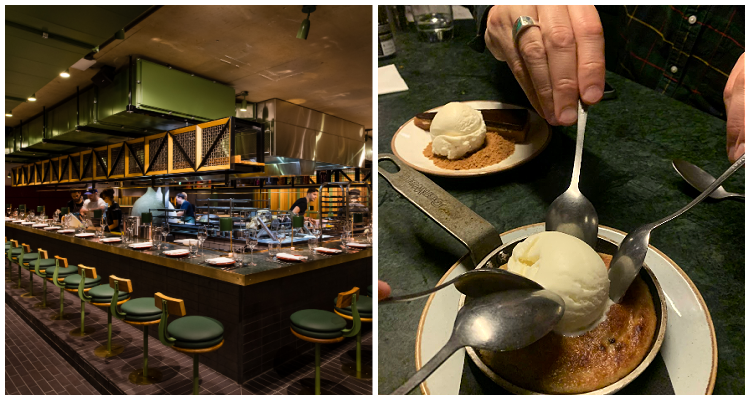 We had to save space for temper's chocolate chip cookie.

Located at the Old Truman Brewery in Shoreditch, DF Tacos takes us back to a Tex-Mex style in a big, open warehouse setting. A casual experience that skews to the more fun and affordable end of the dining spectrum, all ordering is done through a QR code. The menu presents an extensive menu of sharing plates, tacos and burritos with a great vegetarian spread and the ability to make all the classic options meatless by substituting plant-based proteins.

Our group of four opened with a jug of raspberry and hibiscus frozen margarita which was sweet but not cloying, and a serving of guacamole and nachos... just that little bit junk foody in a good way. Tacos come in serves of two, so you'll want to share a few. We gobbled up the ancho mushroom with feta cheese, cauliflower cheese, baja fish and pork pibil though the diablo (chicken and meatless) proved too spicy for some. While the food here was less fine dining than the other restaurants we visited, it’s a fun venue that’s perfect for affordable eats with friends. 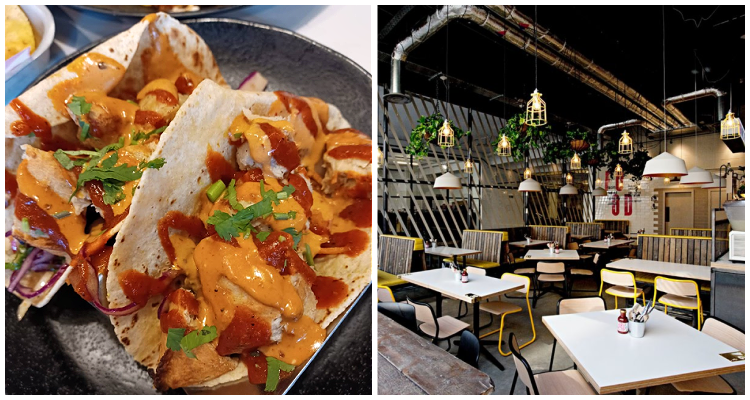 DF Tacos is a great choice for affordable Mexican food in London.

Rounding out my DesignMyNight Taste Tester experience was a trip to Santo Remedio at London Bridge. A more traditional experience of Mexican flavours, we started with the hibiscus enchilada - a beautifully presented dish which let the tart, cranberry flavour of the flower shine through. A selection of tacos and tostadas: pork belly, grilled vegetables and soft shell crab with the later dividing opinion some finding them insufficiently crunchy.

Similar to El Pastor, there are also a number of options to create your own tacos at the table. Of these, we ordered the bone-in short rib which was served with the mole de Oaxaca. Mole (a sauce or curry) is a highlight of Mexican cuisine, and this was a complex, bitter chocolate flavour that challenged the palate and divided opinions. Elote (corn on the cob) and a rich black bean stew were fantastic sides. We rounded out the meal with the dark chocolate and rum tart and a show-stopping chocoflan. As we emptied our final margaritas a la casa, it was adios to our Mexican tour of London. 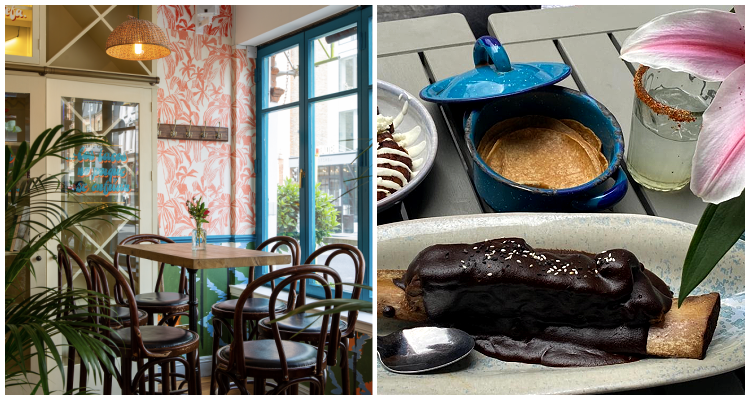 As our taco testing demonstrated, there is an abundance of Mexican offerings in London, with an array of styles and price points sure to suit every occasion and budget. So, if a trip to Mexico isn’t on the cards this summer, you could do worse than exploring the varying cuisines of this fascinating country right here in the city.

Keep up to date with our latest reviews and sign up to our London newsletter for the latest news in your inbox.