Receiving texts from exes asking you if there’s ‘anywhere you’d recommend’ is one of the many hazards of working at DesignMyNight. With 7.5 years in hospitality I can reel off just about anywhere for just about anything… cocktails with a side of scorpion, anyone? But when it comes to seafood, I tend to get a little stuck giving recommendations. Sure - I’ve been to J Sheeky, and Sexy Fish has been on my list since the Stone Age but a new seafood restaurant called Seasons has caught my attention, if not for their sustainable ethos, for their gold dusted pizza that comes with a £110 price tag. 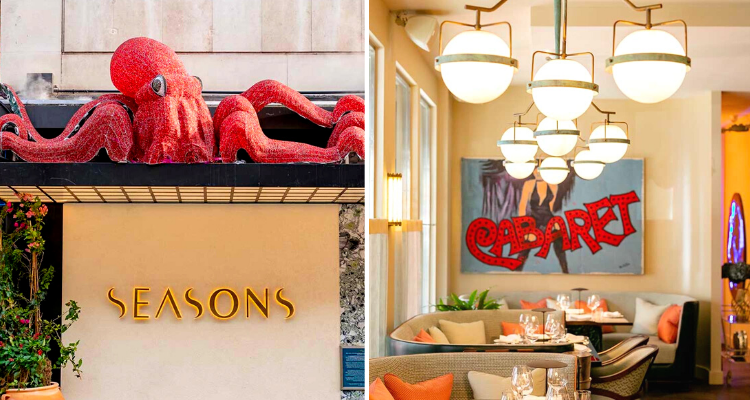 The interiors at Seasons have an understated theatrical nature.

Based in the beating heart of Mayfair, Seasons opened its doors in November 2021 and it’s been shouting loud and proud about its ethos since day dot. There is a sustainability section on their website where they explain the ideology behind creating a restaurant with an ethical chain. Talking interiors, Seasons is stripped back but expressive with a few key features making some noise, such as the red theatrical six-legged octopus guarding the entrance and the school of fish that give the illusion of swimming from the entrance towards the raw fish bar. 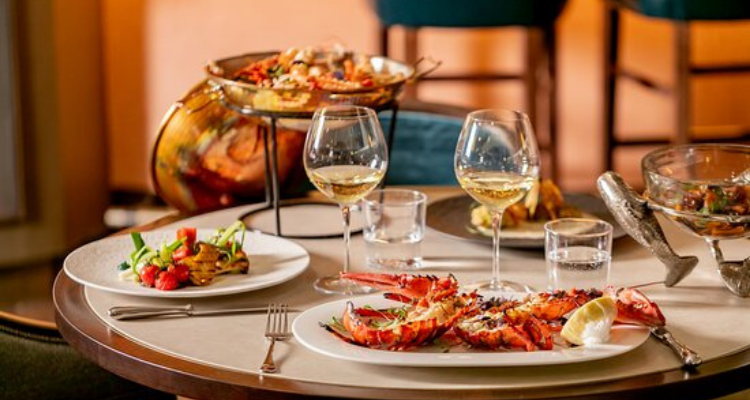 From seasonal tartare to lobster pizza, Seasons menu showcases the best of the sea.

Speaking of the raw fish bar - this was out of action the night we visited. It’s definitely one of the USPs of Seasons flagship venue, but the lack of fish on cold ice didn’t stop us from ordering the tartare selection (£60). In terms of value for money in a place like Seasons, you can’t go wrong sharing this between two, or even three people. We were presented with neat triangular pillars of tartare that came garnished with mini pearls of caviar. The bluefin tuna with truffle cream came in strong on flavour (beware that they go all out with the truffle cream) and the spicy amberjack tartare was a winner with its silky texture. Alongside our tartare, we ordered two singular tempura fried oysters (£16). These came out beautifully presented, each oyster enveloped in golden cocoons of batter.

Now - back to the star of the show: the pizza that comes with a £110 price tag. Titled ‘Native Lobster, Red Prawns’, the base of this 12 inch pizza comes with crème fraiche and is topped with poached lobster and raw prawns. I’m not a lover of white bases and I can safely say that the pizzas I’ve consumed in the past inflicted (a maximum of) £20 worth of damage to my bank account, but what the team at Seasons have created in the kitchen works and it works well. Samphire and miniature red and yellow tomatoes added pops of colour and bursts of texture against the wafer thin, crunchy base of the pizza and fresh, generous cuts of red lobster and fresh prawns were scattered across every slice. The final touches of this boujee dish? Gold shavings, obviously. 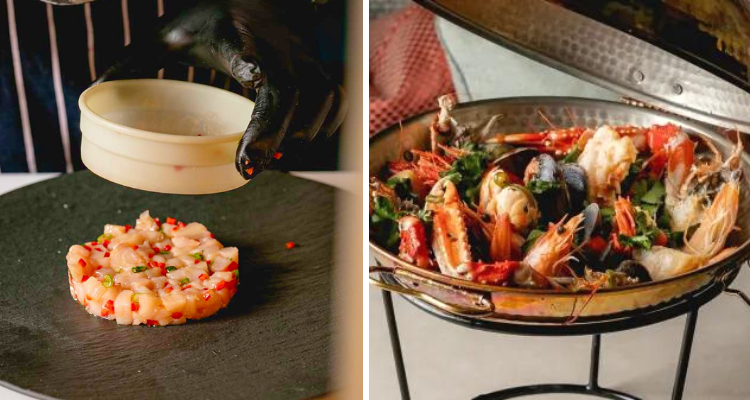 Prepare for the menu to change at this sustainable restaurant as it only embraces what's in season.

A little bit less exciting (but not in the taste department) was the mixed grilled shellfish (£50). This was a premium platter of the best in the sea. Giant juicy langoustines, pillow-light scallops, thick cuts of squid and long octopus tentacles came presented with several dollops of chilli jam. Triple cooked chips (£8) and steamed seasonal vegetables (£7.50) were ordered for the tabe alongside our mains but were quite standard and nothing to write home about.

Finishing up our meal with mille feuille with berries (£12) and the pistachio and raspberry paris-brest (£12) which has delicate layers of pasty and a beautiful buttery texture, we went off-piste from the menu and ordered two old fashioneds (£16) as a nightcap. Not the best classic cocktail - it was on the watery side - but they did the trick.

Stripped back but somewhat immersive, dining in Seasons flagship restaurant could easily lead you to believe that you’re playing in the underbelly of the ocean. The seafood on offer is undeniably fresh and sustainably sourced, fused together using luxurious ingredients like powerful shavings of truffle and black pearls of caviar. As with all luxurious meals in London, this one comes with a price tag and isn’t something for the everyday (unless you’re rolling about Regent Street in a Rolls-Royce, that is) but for those on the look out for a special sea-focused meal, there are other mains on the menu which start from £28. So, the next time I get a text from any exs looking for intel from my little black book, I’ll be sure to send them to Seasons. If not for how good the pizza was, for the dough it’ll set him back.

For more ways to discover seafood in the capital, check out these restaurants in London, here.