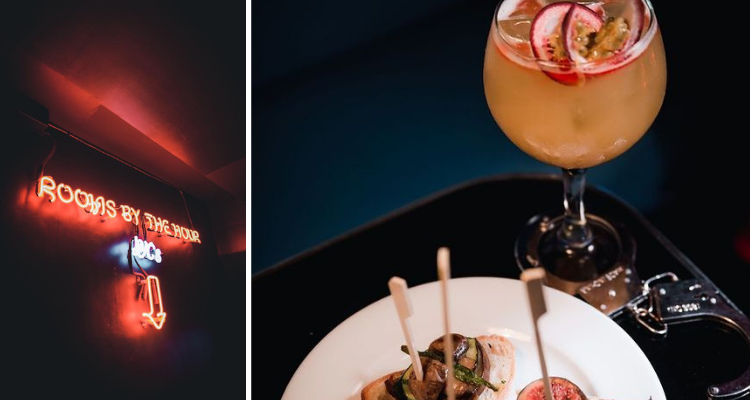 If your vice is delicious cocktails, pay a visit to Soho's hidden gem.

Rooms By The Hour in London?

Let us introduce you to a naughty cocktail hangout in the heart of town, paying homage to the bar’s colourful past life as a 1970s sex cinema.

Directly underneath Pix Pintxos and run by the same team, Rooms By The Hour is a unique concept adding to Soho’s already cool social scene. Once you walk through a door cunningly disguised as a full-length mirror, you're escorted to your very own private viewing cabin in the basement, catering for groups of two to eight. It’s yours for a full 60 minutes and unlike previous incarnations, there’s no charge for films. Just the cocktails.

Your booth channels 70s Soho energy with a mischievous spirit, think blue vinyl-covered seating, black enamelled walls and a curtain to ensure optimal privacy. Perfect for illicit sips and secret conversations. There are three buttons where you can call the waiter, dim the lighting and start playing today’s feature film.

Drinks-wise, you’re gonna be spoilt for choice. The bar prides itself on serving retro cocktails like the Harvey Wallbanger, Tom Collins, and Singapore Sling, alongside brand new, themed concoctions including Taxi Driver and Easy Rider. Not sure what to have? Chat to your host as everything is freshly mixed on-site.

Put it this way, we won't be bringing nanna along.

Rooms By The Hour can be found at 16 Bateman Street Soho, W1D 3AH, underneath Pix. Unearth more secret bars in London over here but if you just wanna hang in Soho, check out our pick of legendary cocktail bars in the area.