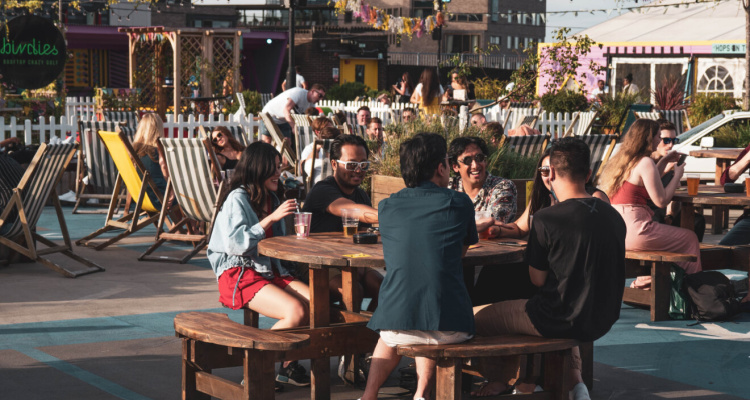 Sunshine and impressive views are all up for grabs at this East London rooftop.

After what feels like an age, Stratford's Roof East will be back in business from the 12th April, bringing with it a shiny new selection of bites, booze and outdoor games. That's right, you're not the only one who's had a lockdown glow up. Gone are the days of queuing at the bar; food and drinks here can be ordered via an app and delivered directly to you. To get things started? The team has created a summery selection of cocktails, including a Southern-inspired bourbon, peach liquor and sweet tea concoction and a fittingly named English Garden Party made with gin, elderflower and pressed apple.

Food will be provided by a trio of tasty vendors, all offering meat and veggie dishes. Cheeky Burger will be cooking up a range of patties on the grill, while East Side Pizza are serving slices laden with 'nduja, butternut squash and goat's cheese. Last, but definitely not least, is Kolkati, an Indian street food stall that's become popular for its masala fries - although its gourmet kebabs and kati rolls are just as praise-worthy.

The playground has also revamped its games selection. Along with Sluggers, the capital's highest batting cages, the 30,000 square foot space will house a number of colourful bowls lanes along with a jungle-themed nine-hole crazy golf course. But that's not all. There'll also be a jam-packed schedule of events, including a rooftop yoga series with Animo Yoga's Nadine and an alfresco film club showing all the favourites, such as The Great Gatsby, Fight Club and Save The Last Dance.

Roof East is located at Stratford Multi-Storey Car Park, Great Eastern Road, E15 1BB. The venue will be open on the 12th April from Monday to Sunday, changing on the 22nd April from Thursday to Sunday. Discover more of the best rooftop bars around London here.