Is there anywhere more synonymous with glamour than the South of France? Super yachts filled with supermodels, souped-up cars screaming along sheer mountain roads; if money could talk it would ask to head to this stretch of the Mediterranean. But life is never like the movies; the last time I was in the region, I had funded the trip through selling parts of my body to medical science (I’ll show you the scars after a few tequilas), and the closest we got to the rich and famous was a man who alleged to be Sean Paul’s manager inviting us to said Jamaican singer’s gig. So when I heard that a 70s Riviera inspired-restaurant had opened up in Soho, I had to see if Folie was more fantasy or reality. 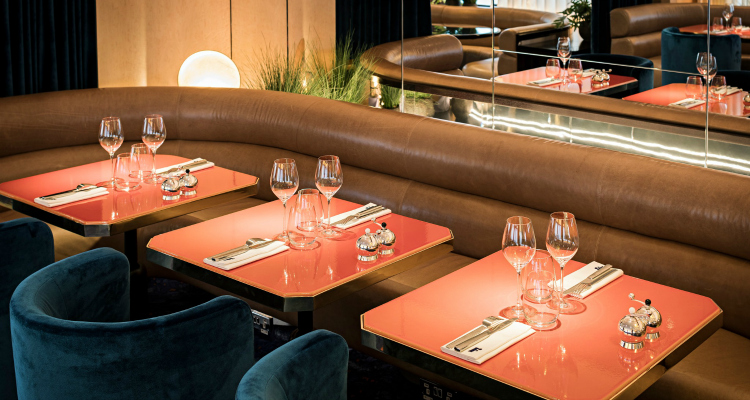 From the off, owner Guillaume Depoix’s vision of exclusivity is established with a thick velvet curtain guarding the entrance of the restaurant. Once we’ve untangled ourselves from its folds, we step into a brass-filled sanctuary of hushed tones and well-dressed pairs. The concentric circles in Folie’s logo have been applied to the interiors; a golden bar curls round to the dining area, where milk chocolate brown-leather booths sit atop swirling floor pieces.

Christophe Marleix (formerly of Annabel’s and Alain Ducasse’s Plaza Athénée) is the man responsible for what comes out of the kitchen, and his menu is a love letter to Mediterranean dining, heavily sourced from British shores. We start with chickpea panisse (£5), five fat blocks of soft, madly moreish, fried chickpea flour, washed down with a ‘very dry’ martini (£12), delivered in two parts: an iced glass, filled with gin at the table. It’s touted that seafood is in the spotlight here, and in the case of my sea bream crudo (£14), the dish deserves its own stage, support cast and musical number. The plate is as colourful as the restaurant, with a circle of white, raw sea bream, creamy soft avocado chunks, tangy pink and yellow grapefruit, and crunchy spring onions - its freshness evoking the sea coast from which it’s inspired. 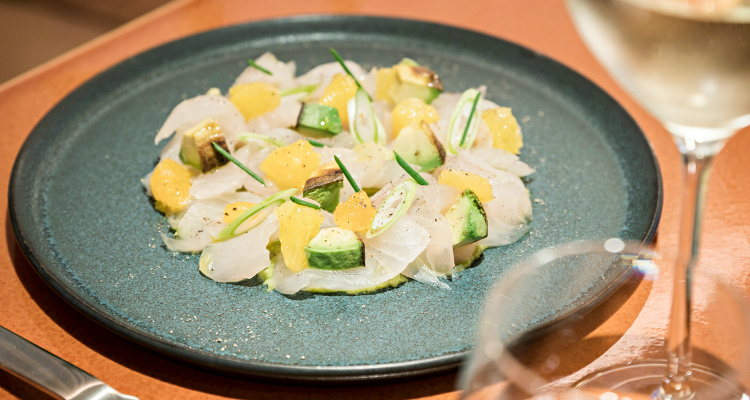 Riviera dining captured in one dish? The Sea Bream Crudo.

We were here for brunch, and alongside typically French choices, there’s the standard breakfast fare - albeit with a smart twist. Eggs royale (£15) is served with piles of smoked salmon and two tiny bread circles, which may be fitting in a world of supermodels - but needs a little more carbs to mop up the bernaise sauce this side of the channel. I end on a zingy high, with the Folie 'Chi Chi' (£9), a lightly battered, sugared doughnut, accompanied by a biting passion fruit sorbet and chunks of mango.

We never made it to Sean Paul's gig - we got too drunk on €3 fizzy rose wine and my travelling companion passed out at the only three-course meal we had been able to afford the whole trip. We were young, it was hot, and we were still wondering what to do when we 'grew up'. Folie is a bit like that, not in the unclassy British sense, but rather the capture of sun-drenched, halcyon days of the Mediterranean. From its swirling, gorgeous interiors to the punch-strong martinis; we can all pretend to be Brigitte Bardot for the afternoon.

Looking for somewhere as gorgeous as Folie to eat? Try our pick of London's prettiest restaurants.