Passport To Peckham: We Sampled The Goods On Offer At Near & Far

Part of the Peckham Levels development that gave Rye Lane’s favourite car park some fresh insides, Near & Far is the latest destination from the team behind The Magic Roundabout, and while they’re sisters, they’re by no means twins. Smaller, cooler and a little more relaxed than it’s East London sibling, it’s a funny little landing strip with views of The Shard and some of Peckham’s lesser-known streets.

“Well, that tastes like a dirty holiday,” says my friend, Lucy, slamming down her first drink of the night and giggling like a 13-year-old in a sex ed class. The drink in question is a favourite here at Near & Far bar - the Ready To Depart (£7). A mix of vodka, Aperol, strawberries, grapefruit juice and egg white, it’s a saucy little number to be sure, but then the same could be said for the whole place. An eccentric enclave on the top floor of Peckham Levels, Near & Far is a heady mash of tropical prints, chipboard and neon lighting, somewhere between a Moroccan medina and the poolside bar of an Aiya Napa hostel. 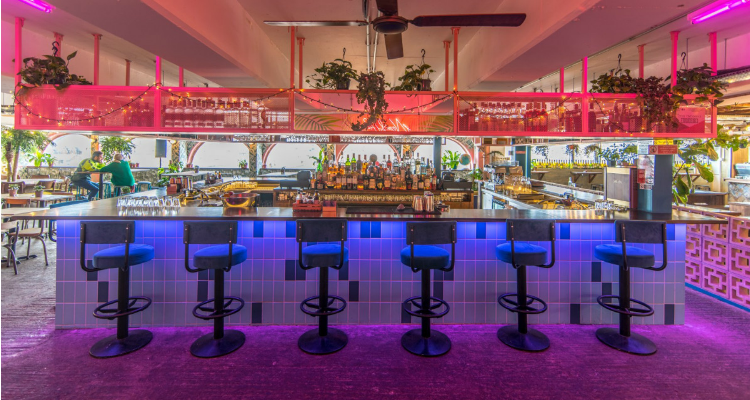 Bringing the beach bar to you, Near & Far fronts palm fronds and skyline views.

It’s got a nice buzz for a Tuesday, with groups throwing back craft beers, others scattered about the tables on the floor, sipping on the bar’s curious selection of cocktails and the odd Aperol Spritz. I’ve kicked off proceedings with an Emergency Brexit (£7.50) which features Hendricks Gin, Campari and Antica Formula infused with thyme, orange peel and cucumber. A negroni, for all intents and purposes, the age-old classic is given a fresher finish courtesy of the cucumber. My friend has knocked back her dirty holiday like she’s slamming Sambucca, pushing us on to round two in less that 20 minutes - now it feels like a holiday. The Goldeneye (£8.50) is a beach-ready concoction of Sailor Jerry’s, pale ale and Angostura Bitters, with a touch of sweetness from cherry and banana liqueurs. It’s drinkable to say the least, with a fizzy undercurrent of boozy beer, that successfully manages to avoid tasting like a Desperado.

They’re a fan of the beer-based cocktails here, and my next drink, the Whisky Biz (£8.50) sees it getting another look-in, this time in the form of a beer and five spice reduction. Partnered up with Monkey Shoulder, triple sec and orange bitters what you’ve got with the Whisky Biz is a refreshing mix of spice and citrus and a big old kick of Scotch - there’s a reason the menu warns that this is ‘not for the faint of heart’.

Lucy has been happily soaking up the booze herself with the pisco, cachaca and apricot liqueur-based Lost & Found (£8), and the Southbank Sling (£8.50), whose mix of chamomile and orange peel infused gin, Plymouth Sloe Gin, Cynar, lavender and orange bitters seems like it might finish her of. By the time we leave we’re more than half way to steaming. 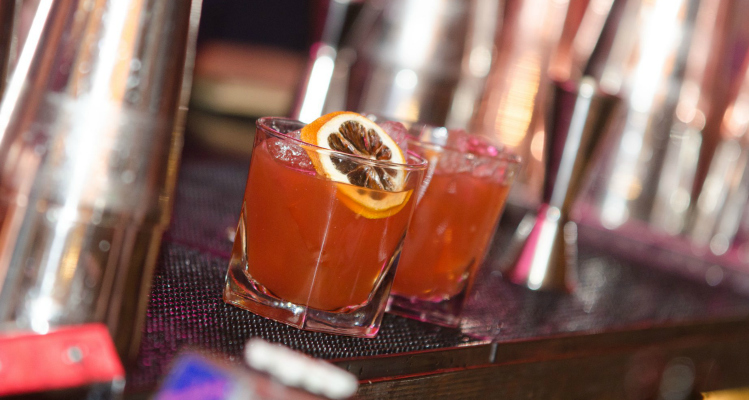 The bar boasts quirky cocktails such as the Emergency Brexit.

As we totter up the steps to Frank’s for some fresh summer air and a nightcap, it does feel a bit like I’m on holiday. So much so that I’ve forgotten that I’m three cocktails down on an empty stomach and my alarm clock is not going to give a fig about that come 7am.

For a dirty holiday that won’t use up your air miles, Near & Far offers an easy-going spot for fruity cocktails with an edge. No need for luggage or sweaty departure lounges, simply pitch up and chill out with some very tasty drinks.