From First On The Scene To Permanent Party; The Little Yellow Door Is Back For Good

‘Quirky’, ‘immersive’, and ‘pop-up’ are what’s known as the holy trinity on London’s nightlife scene, and while many have strived to achieve such godly levels, there’s few who quite tick the boxes. There is one we can hold up as our icon - triple OG The Little Yellow Door started way back in 2015 as a jumbled, flatshare pop-up, that fed and watered you, alongside throwing ‘house parties’ and handing out keys. Four years since they first appeared, the founders now have two permanent spaces, the second of which is The Little Yellow Door’s reincarnation - but can it still pull off what it first started? 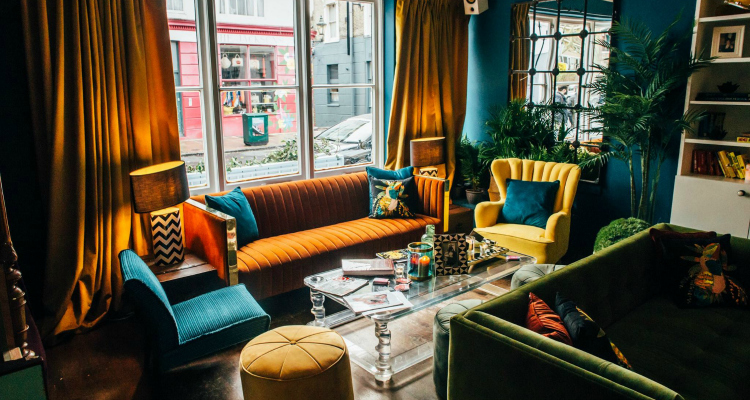 Decor dreams come to life at The Little Yellow Door in Notting Hill.

There’s a lot of similarities between the pop-up and the new bricks and mortar site. Both made Notting Hill their base and both are modelled on the idea of a flatshare, each hidden behind a canary yellow bright oak door. The latest opening, however, is a more polished, grown-up affair - a flatshare belonging to someone who earns one hell of a salary seems more apt, with 70s-esque crushed velvet burgundy sofas and sea blue walls. Downstairs, the basement hides a nighttime playground, with more retro vibes, from a crocodile head mounted on the wooden cladded walls to the neon palm print.

It’s one of these spaces you want to nab, rather than the kitchen counter top, which also acts as the bar, with four seats cosily angled. As there’s no table service, anyone sat in the space is in a constant sandwich between bartenders and punters looking to order more grog or well-crafted cocktails - with an elbow in the back a fun addition to the houseparty experience. Numb the pain with one of their long list of tipples, all originals and all inspired by pop culture references. Thelma + Louise (£8.75) is a tart, rich thirst-quencher, with tequila, Campari, and Martini undercut by tonic and grapefruit juice.

The Little Yellow Door is back and it’s had a glow-up, without losing its sense of fun. There’s still chargers hidden in random cupboards which can be fished out at a moment’s notice, and the cocktails don’t take themselves too seriously; give the knocker a bash and head in for some quirky date night drinks.