With nine London restaurants under their belt, four of which opened in 2017; restaurant group Drake and Morgan quite clearly know what they’re doing. With this knowledge in mind, it’s fair to say I jumped at the chance to visit their Liverpool Street venue, The Drift.

After walking straight past (the exterior has a similar look to many buildings found in the City - seemingly-never-ending-glass-windows), I found The Drift hidden at the foot of the Heron Tower. Being part of one of the City's tallest buildings, The Drift is an almighty glass-wrapped restaurant if there ever was one. This gives the place an airy and bright feel, with sky-high ceilings further lit by huge hanging lampshades. The space is open-plan and split between a downstairs bar that's sat in front of towering metal shelves decorated with plants, as well as an upstairs dining area.

Seated upstairs, we had a great view of the huge marble bar with statement geometric wallpaper overhead, placed adjacent to a massive open plan kitchen; giving it a welcoming, communal feel. The colour scheme lent itself to blue, purple and grey hues and was furnished with a mix of wooden tables and bold armchairs; making it nothing like a laborious city bar, instead it had a bright botanical charm.

Being so close to Bank, Liverpool Street and the City, the clientele largely consisted of grey suit City folk having a drink after work. As it was a Monday, it wasn’t overly busy, but there was a friendly buzz, and in between workers there were also young twenty-somethings and families having dinner. 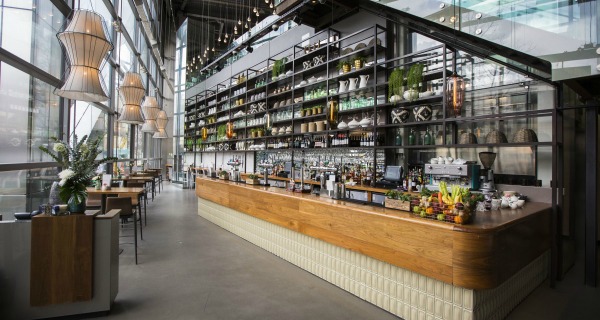 Being a Monday, we naturally made a beeline for cocktails. I went for the Candy Shop (£9.95) which was a heavenly mix of Tanqueray gin, rhubarb and custard liqueur with lemon. Served short, this had the right amount of sweetness making it a cool, tasty tipple. My partner went for a punchy espresso martini (£7.95) that mixed Ketel One vodka, Kahlua coffee liqueur, espresso and sugar, and would be perfect for kicking off a night out.

For starters I chose the scotch egg (£5.95) while my guest went for the crispy squid (£6.50) with lemon mayonnaise. My scotch eggs were perfectly runny, encased in flavoursome meat with a chorizo and smoked paprika mayonnaise, with just the right amount of spice. Judging by the fact that my guest finished the great mound of lightly fried calamari, it’s fair to say it was thoroughly enjoyed.

After a lot of umming and arring I decided on one of the specials; the lobster and crayfish cake (£13.95) whereas my guest went for the pan-fried cod (£13.95). The cakes were delicious, meaty and flavoursome; served with a moreish saffron aioli and a pea shoot salad to add a bit of freshness. The cod came perfectly cooked with crushed potato and gremolata, which was a chunky mix of artichoke, lemon zest, garlic and parsley that complemented the fish beautifully.

To my utter regret, I didn’t manage a pudding, but another cocktail we could just about do. We opted for a margarita (£10.95) and Tiki punch (£8.95). The margarita mixed Don Julio Blanco tequila, lime and agave syrup; packing a sweeter punch than I’ve had previously but it wasn’t a jot less refreshing. The Tiki punch married coconut-washed pampero rum, banana liqueur, and pineapple with lime and stout for a taste of summer in a glass. 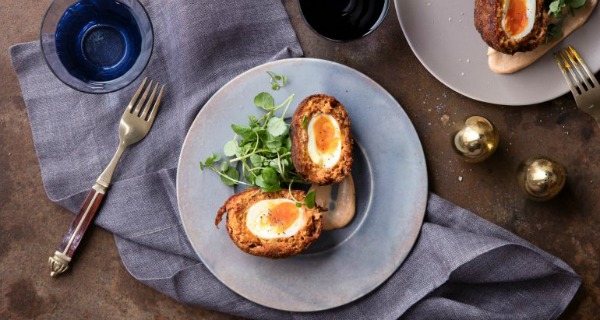 The scotch eggs were a delicious start, full of flavour and paired beautifully with a spicy mayonnaise.

It’s not often I’d think of the City when I’m after an after-work meal in London, but with its offering of delicious starters and tasty mains, The Drift might just have to become my go-to.