Holidays At Home: We Sampled Some Of The Best Mediterranean Plates In The Lanes

The brainchild of Paradiso Social duo Will Dennard and Jack Southan, new(ish) Lanes spot med. has succeeded in bringing a sliver of sunshine to the South Coast. Inspired by the flavours of the Mediterranean, the menu is must-try for anyone who was forced to forgo their Eurotrip this year - which is precisely why I’m darkening their door on a rainy Thursday evening. 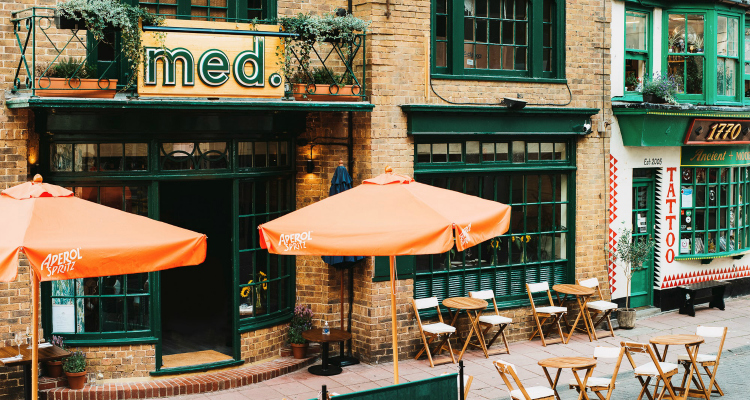 Who needs Southern Europe when you've got staycation vibes like these?

Inside you’ll find a warm welcome and a slick set-up, as friendly staff manoeuvre their way between diners, plonking down plates of grilled fish, meat and vegetables. The first to appear in front of us is the house bread (£4), a soft sourdough focaccia served with a ramekin of homemade aioli. From their selection of smaller dishes we nab the Egyptian hummus (£5), which comes topped with crunchy dukkah and plenty of coriander. However, it’s the wonderfully wobbly burrata (£7.50) that steals the show with its silky centre and hearty slug of Sardinian olive oil.

Dishes come as they’re ready, so be prepared for a little tabletop Tetris. Thanks to some clever spatial engineering - namely the removal of phones, candles and elbows - we’re able to squeeze on our larger plates, as well as a bottle of very smooth Montelpuciano d'Abruzzo (£28). And this is where the fun really begins... 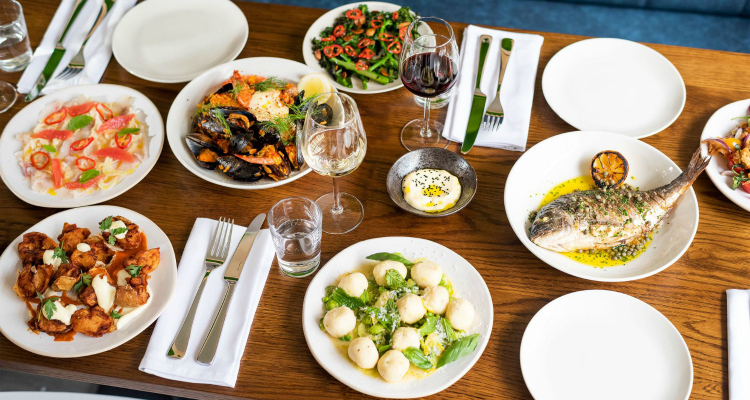 The menu brings together the flavours of the Mediterranean in fresh, wholesome plates.

A table full of small plates is in essence a personal buffet, and like any self-respecting glutton, my particular strategy in those situations is to maximise on the food-to-plate ratio. To start, I lay down a base of crispy potatoes (£5). These little patatas bravas front a crunchy coat and hot, fluffy insides, perfect for soaking up any and all surrounding sauces. Next we pile on some grilled cauliflower (£9) - topped with harissa and tahini zhoug it adds a refreshing zing to the growing ensemble. Now it’s time for the seabass (£8), offering light but meaty mouthfuls of white fish, partnered with a rich caponata. And to crown this already glorious plate? Chunky blocks of whole roasted mackerel (£15), stuffed with black olives and pungent smoked garlic. Then all that’s left to do is grab a fork and get to work dismantling those delicious layers.

Fun, friendly and brimming with bold flavours, med. has truly captured the sensations of Southern Europe. The food is exceptionally fresh, and the atmosphere perfectly relaxed, so for those of you who were forced to swap your summer holiday for a later-season staycation, this Little East Street restaurant will really hit the spot.

Brighton's Instagram-Famous Private Dining Igloos Are Back For Winter

Brighton's Instagram-Famous Private Dining Igloos Are Back For Winter