We tried out The London Dungeon's new after-hours experience

Being completely honest, I wasn't quite sure what to think as an actor placed a top hat on my head and stuffed a tied cravat into my denim shirt at the entrance. I had always pictured The London Dungeon as the most tourist-targeted experience in London. And, given that three different vendors had tried to sell me an "I <3 London" shirt on my way to the venue, I think the assumption is a fair one to make. It was with that mentality that I foolishly reassured myself by thinking 'come on, how scary could the London Dungeons Lates really be'?  How wrong I was. 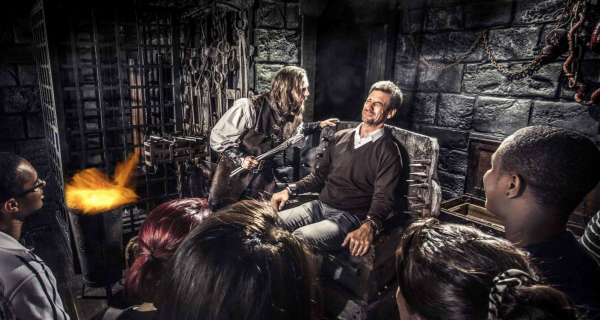 The Jacobean torturer is just one of many deranged, eerie characters that you meet during this immersive experience.

Once appropriately dressed, you're led to a little tavern area where a jovial East-end landlady, dressed in a bright Victorian gown, serves you a gin and elderflower cocktail. Although I probably should have expected this from one of the capital's premium attractions, it's the decoration and staging of each set that makes the experience such a success. From the flickering lights down to the shaking windows that occasionally reach out and grab you, every inch of the set has been carefully planned and plays arguably the biggest role when it comes to giving you goosebumps.

After gulping down your cocktail, you're forced down a few eerie, creaking corridors until the first character appears out of the stale mist; the parliamentary guard who apparently caught Guy Fawkes back in 1605. It's in this fashion and along these lines that the entire event unfolds itself. You make your way through a sort of twisted maze, incredibly decorated with detailed features and hidden figures in the dark until the next famous character literally jumps out from behind a rotting, rat-covered body. Full of lude descriptions and probably one-too-many penis jokes, each character focuses on one of London's haunting stories and makes you shiver with fear.

And that's not even mentioning the sudden blackouts. At any given moment, everything goes pitch black, with the lights only turning on to reveal a knife-wielding, blood splattered maniac standing over your seat. A true testament to just how terrifying this immersive experience is, by the end of the event, every person in my group began covering their eyes as soon as the lights went out, too scared to see what might appear in front of them.

Working in tandem with the incredible set, the trained actors are the headliners here. From a Jacobean torturer to a pair of ladies of the night working in Whitechapel around the same time as the Ripper-murders, the many characters - some fictional, some real -  help to highlight some of the darkest moments in London's history. Two, in particular, stand out in my mind. For obvious reasons, the wort-ridden, semi-cannibal plague doctor still sends a chill down my spine. It might have been her shrieking voice, her gory post-mortem of a plague victim or the fact that she jumped out at us from behind a false wall. And then there's the disturbed little girl. A friend of Mrs Lovett and the famous barber-surgeon Sweeney Todd, her ragged clothes, demented speech, split-personality and child-like tendencies really brings the simplest stage to life. Both characters are chilling and left me looking over my shoulder for the rest of the event. 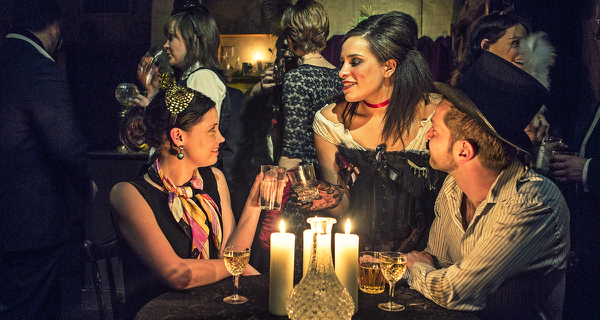 Each guest is treated to two cocktails, the first in a Victorian gin parlour and the second in the iconic Ten Bells pub.

The London Dungeon Lates is kind of like the way older, cruder brother that comes out to play at night, once the families have gone home. The cocktails, the twisted characters, frightening sights and dark humour really surprised me and completely dismantled my prior idea that this event was only for those with a bum bag and pair of Sketchers trainers. Instead, I found an exhilarating, cocktail-lined immersive experience that left me both beaming with a smile and scared out of my wits.