Ellen Parr, who was responsible for last year’s futuristic dining event Operation Red Rocket, has landed back to earth with a mighty thump this year as she brings another pop-up, Lucky & Joy, to London’s cosmopolitan dining table. Teaming up with bartender Pete Kelly, both have taken inspiration from their travels abroad, to bring a fiery taste of China to the railway arches of East London.

Lucky & Joy’s plot can be found nestled underneath Cambridge Heath Station and it bears a rustic, yet rough and ready exterior. With some mild sunshine breaking through the clouds the evening we visited, we decided to soak up what vitamin D we could and take a seat outdoors. Disappointingly, there was nothing much to admire - bar a few withering plants, but on a quick trip to the loo, I noticed that all the charm was safely tucked away indoors. Exposed brick work and wooden panelled walls made the space, while a combination of hanging ivy, neon signage, fake flowers and ruby red Chinese lanterns gave the place a kitsch edge. If you’re one for eyeballing the chefs at work, you’re in luck. The kitchen is open-plan and there’s a couple of seats offering prime viewing. 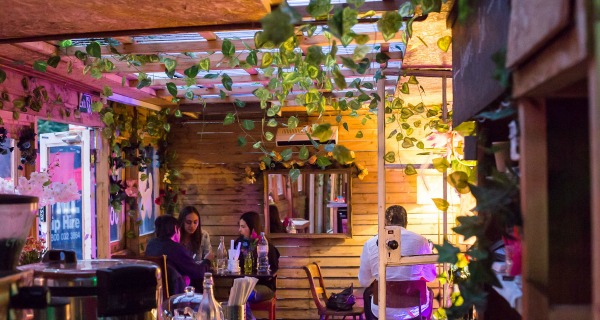 If you're after a side of ambience with your meal, make your way indoors to Lucky & Joy's ivy-clad space .

The dishes at Lucky & Joy change daily, and they had a strong selection printed on their A3 menu the evening we popped by. All coming out of the kitchen at different times, myself and Tom digged into our first dish like the chopstick pros we were born to be. The sesame noodles £6 were served cold, sprinkled with shallots and swimming in a rich peanut-based sauce. Second in line was the pork bao £4.50. Two perfectly plump buns pillowed two thick slices of pork belly, both topped with a tangy sauce, cucumber and freshly cut slices of chilli. Although one cut was a bit too fatty for my liking, the flavours were there to pick up for the lack of meat.

Next to land on our table were the cumin pork ribs £9 and the red braised sea bream £14; both of which were visual pieces of art. The ribs were piping hot, garnished with pretty edible flowers and the meat slid off the bone like silk. The cumin, dry ginger and soy rub was impressive with smoky flavours elevating the dish to another level, but I found it a tad overwhelming towards the last leg. The red braised sea bream was the real star of the show though. It came presented on a plate printed with vivid colours with yellow and white flowers gently resting on top of its crispy skin. Placed in a pool of moreish black bean, green chilli and fermented broad bean broth, the flavours brought the flakes of fish effortlessly to life. 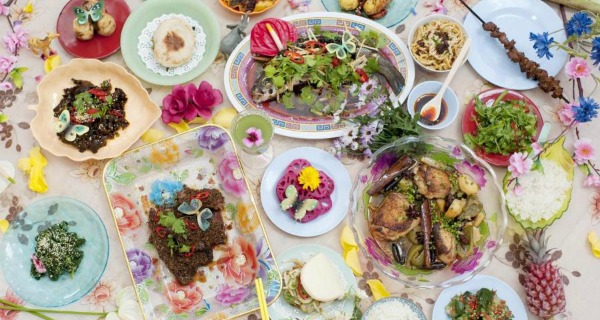 Lucky & Joy have nailed the colour scheme when it comes to their Chinese-inspired dishes.

Like the food menu, the cocktail menu at Lucky & Joy gets spruced up every now and again, guaranteeing you a new serve if you decide to return for another table of Chinese cuisine. Utilising Asian fruits and spices that were discovered on Pete's travels, we opted for the Chinese medicine £8 (blended Scotch, Laphroaig, ginseng, honey, ginger, lemon) and the peach marg £8 (tequila, mezcal, Ancho Reyes, peach and lime).

Lucky & Joy mightn’t be much to look at from the outside, but it’s got plenty of hidden charm lurking beyond its threshold. The dishes are big in portion and bold in flavour, so get in touch with that one friend of yours who's known for their chopstick skills (we all have one), and get ready for some thought-provoking sharing plates and cocktails all the way from China.