Our Kind Of Hells? We Tried The Bottomless Brunch At Camden Town Brewery 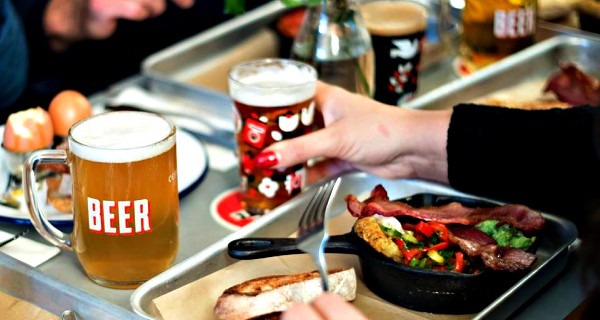 Beers and dribble-worthy breakfasts are the name of the game at the Enfield centre.

Call me basic, but I love craft beer. From Insta-worthy cans to the relenting choice of flavours, I am totally here for it. So when Camden Town Brewery needed a second, larger space for more of that delicious lager they’re known for, the lucky stars fell on me, 'cause they chose my native Enfield. Being part of the privileged few who live within walking distance, I felt like it was my selfless obligation to try their new monthly bottomless brunch.

There’s no doubt about it, Camden Town Brewery is a shiny red beacon in an otherwise dull industrial area. The warehouse itself is huge, complete with red walls covered in signature illustrations, red neon beams, a shop-like entrance where you can pick up a few cans, and an effortlessly cool bar upstairs.

Kicking things off with food, our bottomless beer brunch (£27) included a hot main, and although tempted by buttermilk pancakes and shakshuka, we opted for the skillet baked hash with hot pepper salsa, adding avocado, chilli and lime and smashed avocado with poached eggs and sourdough. Both were flavoursome (and sizeable) alternatives to the humble granola.

Not skipping on the beer, you can enjoy bottomless Hells Lager or Pale Ale, as well as caramel-ey stouts and zingy Pil Lagers that you wouldn't find in a regular boozer. They come in half-pints, so you’re free to go hell(s) for leather during your slot. 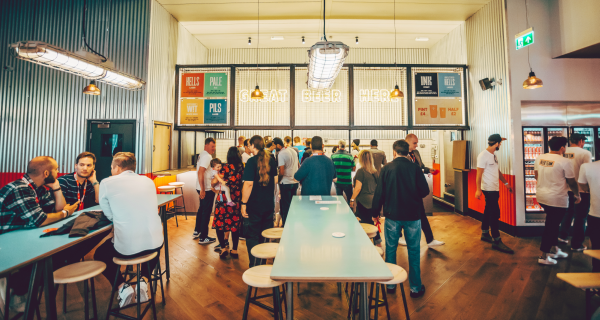 While in Enfield, they're Camden through and through.

Suitably boozed, we embarked on the brewery tour. Fit to bursting with excitement (I’d never been on one before), I was not disappointed. With a can of Camden Hells in hand, the tour guide took us around the brewing village and the huge keg robots; explaining everything from the origins of beer, to the moments that hops are added to create certain brews. The tour is then rounded off with a tasting on the brewers deck at the end, where we enjoyed six different brews (as newly seasoned pros).

I couldn’t fault my experience at the Enfield centre. The food and beer were top-notch, the brewery tour was insightful and fun; and for what it involves, the value for money is unbeatable. I never thought I’d be saying this, but you all need to get to Enfield ASAP.

The next dates for the Camden Town Brewery's bottomless brunch are March 24th and April 28th.