Once caught flying between football training, drama rehearsals and band practice, a teacher warned me that: ‘You don’t want to be jack of all trades and master of none’. In a eureka moment, I proudly declared: ‘I’ll be jack of all trades and master of some’. In the case of M Restaurant Victoria Street, I feel like I’ve found a fellow subscriber to my childhood mantra. Brainchild of former Gaucho boss Martin Williams (and having just opened a third Twickenham site), it consists of a wine shop, two restaurants, a cocktail bar, private dining rooms and a private members bar. I headed down to see whether this much hyped restaurant could deliver, or whether like me, it would be late for practice.

Your journey into M begins in the wine shop (where all good journeys should start). ‘M Wines’ is predictably well stocked with a comprehensive international selection but its chief purpose is window dressing with sparkling bottles of Veuve Clicquot acting as a siren to passers-by. Once inside, a central staircase descends into a high-ceiling-ed basement below and into ‘M Raw’. Advertised as ‘100% gluten-free dining’, this Japanese-Peruvian style restaurant provides an oasis of ethically sourced and health-driven dishes to be enjoyed at a long marble counter overlooking an open kitchen. 'M Bar' is as sleek as the rest of the venue, with gigantic Belvedere vodka bottles lining the back and a bar top so polished, we worried about leaving marks.

Keep an eye out for the discreet door which leads into ‘M Den’, a 50-cover private members bar which murmurs of sophistication and nights of whisky on the rocks. Finally at the rear of the building, you have the pièce de résistance, the ’M Grill’ beautifully styled with olive leather and golden hanging lights. A cluster of small tables fill the centre of the room but where possible, make for one of the surrounding semi-circular leather padded booths. 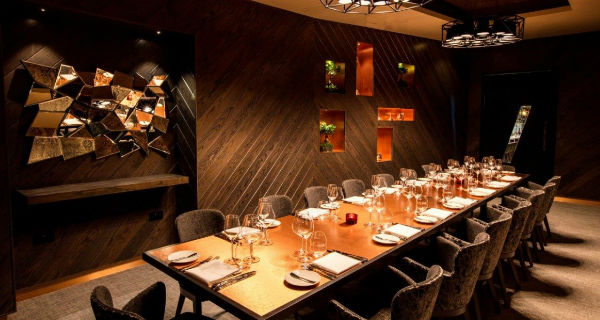 We began the night by having an obligatory cocktail at the bar. It’s no surprise that with their penchant for all things ‘M’, Martinis take centre stage here and their Salted Caramel Espresso Martini (£14.50) is certainly one of the best I’ve had in a long time. Incredibly sweet and delicious in every way, this also works well as a dessert cocktail. With its accompanying menu of bar snacks and bites, this isn’t simply a bar tacked on to the restaurant, this is a destination in its own right.

We did want to go the whole hog and were firstly recommended the Smoked Wagyu Tartare (£15.50) and the Buttermilk Fried Chicken (£11.50). Who doesn’t like fried chicken right? I was slightly worried it would turn out to be a minuscule dish of non-fried pretension but fear not, for it was amply sized and battered to perfection. Served with a couple of pickles and the choice of a hot sauce and a creamier alternative, it was sufficiently ‘American diner’ and all I’d hoped for. The second starter arrived shrouded in mystery, literally. In a piece of well choreographed theatre, the waitress quickly removes the glass cover to reveal a billowing cloud of apple smoke and in a sort of ‘Tonight Matthew, I’m going to be…’ moment, the Wagyu Tartare is revealed within. Happily it’s not all for show, as the lovely smoked flavour and accompanying egg yolk hit a nice balance.

The centrepiece of M is, of course, the steak. Without hesitation we opted for the International Steak Board (£120.00). This consists of a kilogram (yes, 1kg) of some of the finest steaks from around the world; namely a USDA Prime Fillet, an Argentinian Rump, a French Striploin, a Botswana Rib-eye and a Blackmore Skirt. The Prime Fillet was exceptional but be sure to leave the Skirt 'til the end. Its dark and rich flavour may overpower the other steaks but when paired with a nice full-bodied red wine such as our M Signature label Malbec (£80), it’s an absolute delight. A side of M Chips (£4.50) works well and as a sauce we opted for the Chimichurri (£3) though with the sheer gargantuan size of this board, it’s worth doubling up with two. After the equivalent consumption of half a cow, we rounded off our excess with the White Chocolate and Coconut dessert (£8.00), consisting of a small mousse with a hint of lychee which was the perfect palate cleanser to finish off an excellent meal. 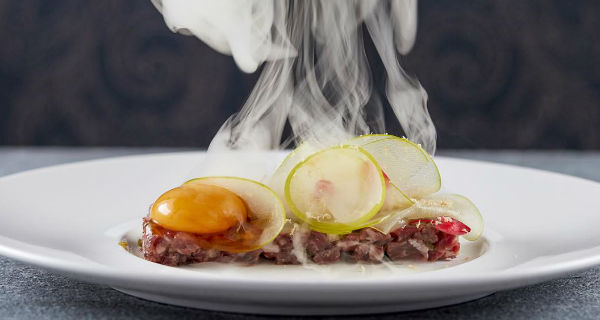 Simply put, M Restaurant Victoria Street is impressive. Its refined and luxurious, but lacks the pretension of some other fine dining establishments; it’s clear that Head Chef Michael Reid has created something quite special here. M will undoubtedly snare the proximate suits, but due to its sheer versatility, caters for just about any occasion. I can’t recommend this place highly enough and I have no hesitation in saying it really is, the master of all trades.