Not everything needs to reinvent the wheel. Sometimes, a bar doesn’t need to serve the distilled essence of vodka and your soul in a boot to be a good cocktail bar and, actually, London might not need another small plates restaurant, thank you. So in the search for somewhere that serves amazing cocktails alongside tasty food that's rounded off with an amazing atmosphere, I set SAMA Bankside in my sights and took the bus just over the river.

Shacking up in London’s disused railway arches already adds some fun spectacle to the interiors of bars and SAMA leans into the design. The upstairs bar opens with floor-to-ceiling windows/doors, before opening up to the exposed brickwork and then plane hanger-esque panelling further down. These industrial features, as well as the vents-cum-lights hanging from the curved ceiling, are offset by pop art paintings hanging on the walls and a quirky colour scheme (think bright pink stools and sky-blue sofas). There's also a long, open space underground normally used for dining.

Coming on the Friday of Halloween weekend, there was a private party in the event space downstairs, so I won’t count the Draculas and Donald Trumps in with the atmosphere. When I arrived at 7pm, there were large pockets of after-work, twenty-and-later-somethings drinkers, taking advantage of the last of the 5-7pm Happy Hour. Later on, the bar remained fairly busy with a city-centric crowd. 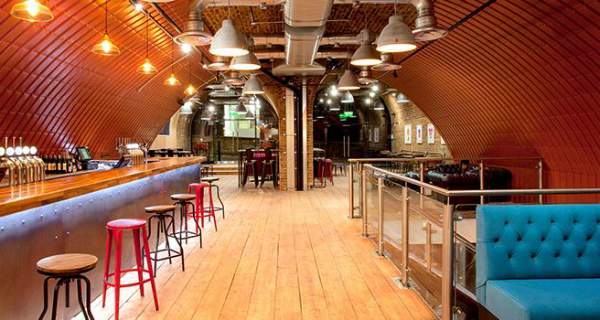 'Laid back but a little bit quirky' is SAMA's aesthetic.

My useless friend got the address wrong and arrived late, so I was forced to wait like I’d just been stood up on a date. Trying to ride through it like the incredibly cool and collected man I am, I ordered a Gin Berry Sling cocktail (£9) to keep me entertained, made from Tanqueray gin, Blueberry & Strawberry shrub, and grapefruit juice. It’s as sweet as you think it is, but just as cute too – making it tasty enough to see me through and with a strong enough punch that I could ignore the sideways pity glances from the other tables.

When she eventually pulled up, we jumped straight into some food, opting to share a fish platter (£15) to start. It came with salt cod fritters, smoked salmon, crispy squid, prawns, aioli, sweet chilli sauce and grilled flatbread. All of it was remarkably fresh, despite the fact that this is a menu of comfort food, with the crispy squid being a particular fight-for-the-last piece highlight. Meanwhile, we decided I would finish the fresh smoked salmon, as my pal took on the tasty fritters. Good job I was taught to share.

A platter might sound a bit too big for a starter, but my friend and I are essentially black holes whose digestive system has enough gravity to crush any food unlucky enough to get caught. So it was no surprise we chose even heartier main courses, with my pal asking for the Jerk Chicken (£13) with coconut rice & peas and pineapple slaw, and I opting for the BBQ pork ribs (£13) with fried plantain, sweetcorn fritters and sweet BBQ sauce. We also ordered a side of mac n cheese (£4.50) because we were in for a penny, we might as well be in for the extra two stone.

The ribs were slathered in sauce and basically fell off the bone, and, despite being a half rack, disappeared from my plate in seconds. Unfortunately, they were out of plantain, so I swapped it out for the, uh, healthy option of sweet potato fries, that were handily used to wipe up any remaining BBQ sauce. The jerk chicken was tasty, but could have done with a bit more of a kick to really complement the Caribbean sides surrounding it.

Refusing to be finished off by the sheer amount of protein we just consumed, we ended our night with two more cocktails: the Salted Caramel Sour (£9), made from Bulleit bourbon, pecan & salt syrup, lemon and egg white for the sir, and Under the Arch (£9), made from Ketel One Vodka, Elederflower liquor, apple juice, Honey & Thyme syrup for Madame. The cocktails are probably the best thing at SAMA, with the sour being a particular highlight. Slightly drunk and full of food, we jumped on the tube and tried to not look at Zombie Theresa May in the eyes. 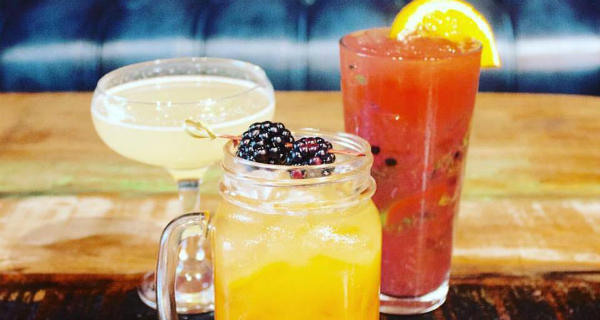 The cocktails are pretty good - especially so when you've been stood up on a date.

SAMA Bankside is here for you if you need hearty dishes coming in proper portions. But the post-work atmosphere and prime location makes it an ideal spot to grab one of their great cocktails and get stuck into the city partying.