I’m not a fancy man. You’ll catch me eating a large mixed grill in any Spoons across London more times than you’ll see me in a tuxedo at the Ritz. But every so often you have to treat yourself. Wipe away the thoughts of impeding World War III - and, if we survive that, the fact we’re never going to retire and we'll probably never own property (ahahhaha laugh so you don’t cry) - with a whole lot of millennial-approved amazing food. So I grabbed my least posh, hard-on-their-luck mate and paid a visit to Baluchi, the fine-dining Indian restaurant in the five star hotel Lalit, to see if fancy food could save the day.

Baluchi is bold. Set in a giant Great Hall, we entered through the side-entrance rather than the actual entrance to the hotel (via personal dumbness alone) and we were still greeted by a large door below a gigantic window that wouldn’t look out of place in Hogwarts. The grand hall has your classic stylings of such a place, with dark wooden panellings, balconies trailing the walls, and beams supporting the ceiling. But they take a hard-left into Boldsville with a deep, sapphire colour scheme, from the upper walls to the giant chandeliers complete with dangling blue crystals. It felt like eating in a Wes Anderson film and I kinda loved it.

As I may have mentioned several times before, the hall is big; I half expected to get eaten by Daenerys' dragons as I looked for the loos. But this is a double-edged sword, as it’s pretty hard to fill all those seats and when they're not, it can feel a bit weird. If you like the grandiose vibe, though, it definitely fits the bill. 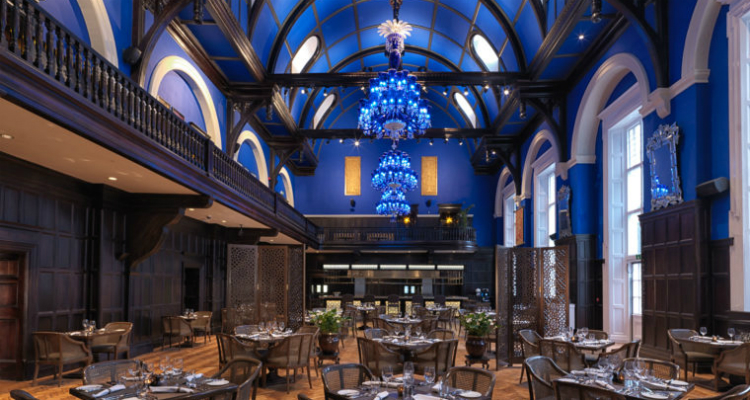 While it's got the size of a dangerous Game of Thrones scene, it's a little bit more 'Grand Budapest'.

Suitably enamoured by our surroundings, we ordered a delightful red bottle of Cabernet Franc, Chateau de Fesles and moved onto the food menu. Taking inspiration from the adjacent cocktail bar, The Teacher’s Room, the menu has adorably labelled the courses ‘Term-One’, ‘Mid-Term’ and ‘Term Break’, which I thought was cute. However, this food is a long way away from school dinners.

Oh boy, there wasn’t a Turkey Twizzler in sight.

After manipulating my friend into not ordering what I wanted, she chose the lamb chops (£14.50) with micro salad, smoked aubergine and potato mash, beet crisp, coriander, and mint and garlic chutney, to start, and I opted for the Orkney scallops (£13.50) with samphire pakoda, sea buckthorn puree, and gin foam. Both dishes were stunning to look at. The two lamb chops were a bright orange treat, garnished with flowers, flawlessly cooked, and partnered perfectly with the puree and mash.

My tactic of convincing my friend away from the scallops like a very tame, opulent Disney villain paid off. The scallop itself is sat in its shell, presented on a batch of dried grass, and covered in a glass dome filled with smoke. This is torn off to unveil one of the most delicious scallop dishes I’ve eaten in my life. I felt like I should’ve been manically laughing as the smoke revealed it. The scallops itself were gorgeous and the gin foam added a powerful dimension that didn’t overpower the delicacy of the seafood. 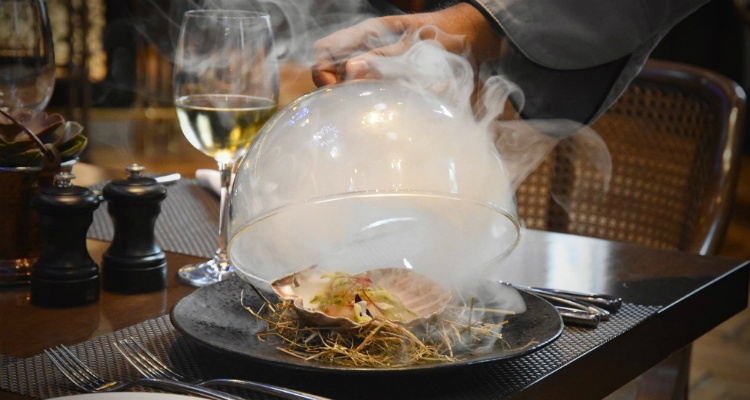 Adding a little theatre to food is always welcome, but this meal was damn near perfect without it.

For the main course we both swapped the land and sea. My pal opted for the sea bass (£14.50), boasting a pinenut and coriander crust, and coming with pickled rainbow carrots, green pea and potato fritter, and Kasundi mayonnaise. While this dish was cooked very well – everything was technically flawless – achieving the quintessential “perfect crust” on the seabass easily, my friend suggested it could do with more of that tasty Kasundi mayonnaise, as it came off a little too bare for her liking.

However, I batted her minor concerns away with my dinner. I received the Lamb Shank Gush Taba (£22.50) and I implore you all to do the same. The slow cooked lamb shank fell off the bone and was so mouth-wateringly perfect I would’ve picked it up by the bone if I wasn’t in a fancy restaurant and my mum didn’t read my reviews. The fennel and cashew provided the perfect crunchy contrast to the meat. The curry surrounding it made me want to melt away into the dish. This was by far the best Indian meal I’ve eaten. 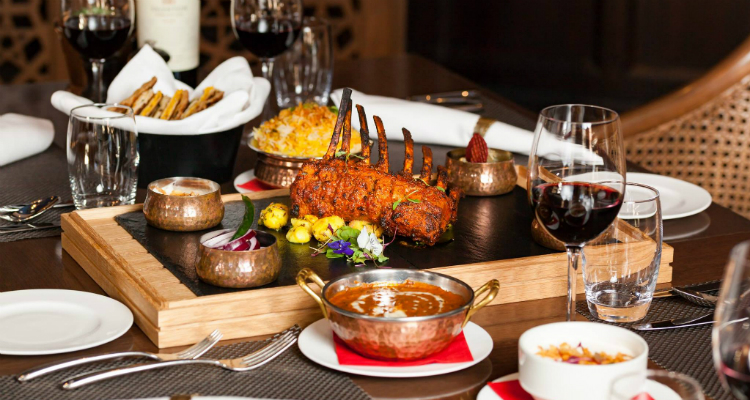 When food looks this good, it's hard to think it can taste better. But it does.

While I did have major imposter syndrome sitting in that giant Great Hall with a childhood friend who I used to get drunk off cheap cider in the park with, sometimes it’s important to treat yourself. And boy, did I ever treat myself here. Baluchi's food is sublime. Anniversary meals, flashy dates, or for a very special family meal, go here and order some lamb.