Anyone that’s been to Soho can tell you it’s brimming with restaurants, though not all of them are memorable enough to make a return. But as I absolutely love an Indian (arguably more than the next woman), I thought I’d head down to try the newly launched Dum Biryani House. With the mastermind being ex Fat Duck chef Dhruv Mittal, I had an inkling I was in for a treat.

On Wardour Street, Dum Biryani has an unassuming entrance, so I was excited to step inside and be met with a wall of green foliage, and a hum of 90’s hip hop leading me down to the basement. The restaurant was dimly-lit yet colourful, with the space consisting of a main dining room and vault-like booths, giving it the feel of a cavernous den. Amusing Indian cartoons and pop art depicting family life are on the walls, giving it a fun feel that’s unlike any other Indian, let alone Soho restaurant I've been to.

Colourwise, blue, white, yellow and orange hues dominate, while wooden tables and chairs cosily hug the walls. The large hanging light bulbs, mirrors and square windows in the ceiling give the basement the right amount of light, with losing any of its cool broodiness. 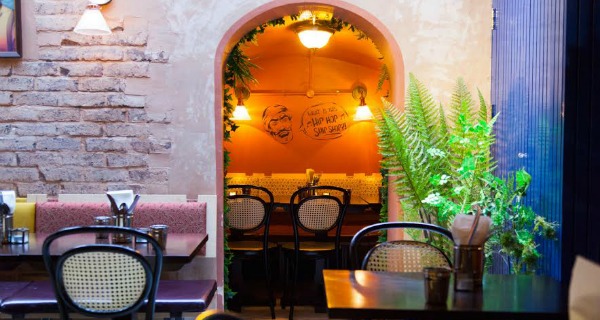 Incase you hadn’t cottoned on, these guys specialize in biryanis, but kicking things off with an Indian-inspired cocktail just felt right. My date went for the refreshing Haramzaade (£8.00) made with Old Monk rum, Cointreau, lime, ginger, grenadine, almond syrup. I liked the sound of the Pehla Nasha (£8.00) a concoction made by combining Campari, Opihr Gin, Cocchi Di Torino, pear liqueur, clove and chilli syrup. This was a delightful cocktail that maintained the taste of campari, but changed the bitterness into aromatic fruitiness.

Ready to get our spice on, we kicked things off with the Upma, Salan and Adrak Pachadi (£4.95) which was savoury semolina porridge, peanut and sesame curry with ginger pickle. Though it sounds unusual, the porridge resembled a spicy mash, and paired perfectly with the fiery, thick curry beneath it. For our second snack we went for Andhra prawn fry (£5), the stir-fried king prawns were crunchy on the outside and packed a meaty bite, accompanied with red chilli and fresh coconut shavings. On recommendation we also tried the Pattar ke kebab, Methi Pachadi (£6.95) which was rich and juicy Lamb shoulder balanced by pickled cucumber and fenugreek chutney.

We opted for pints of Cobra (£6) to tackle the main event, the biryanis. ‘Dum’ refers to the way the meat or veg is layered with the rice then steamed to perfection, and Mittal has put on his own twist by adding a pastry lid. I opted for the lamb shank biryani (£16.95). Diving in, I found a steamy scented rice and tender flavoursome lamb that fell of the bone. I love a condiment, so a stand out for me was the tangy spiced okra yogurt, fiery house pickles and creamy-yet-full-of-heat aubergine and peanut curry and poppadoms that accompanied the dish. My friend opted for the chicken biryani (£15.95) which was full of tender chicken pieces.

I won’t fib, I know nothing about Indian desserts (and I was extremely full) but as our friendly waiter recommended the Rabdi (£5) we tackled it between us both. It was an Indian milk pudding with rosewater, cardamom and caramelised rose petals. This was thick and creamy with the right amount of sweetness from the rose. Albeit after this, we truly were defeated. 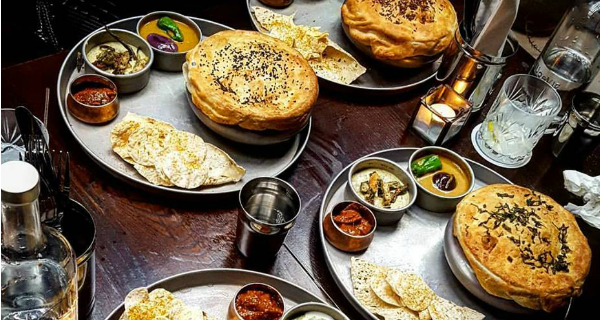 Once a humble dish, biryani is now the main event at this wicked Indian dining spot.

I’m a sucker for spice, and I love trying out new Indian cuisine, but Dum Biryani House was truly something special. The staff were lovely, the food was affordable for the sheer variation and quality of what was served, and I’d be prepared to have a full blown argument with anyone who didn’t appreciate the decor. Curry pie? Any day of the week. I’ve discovered Dum Biryani and wild horses couldn't drag me away from this place.