We’re all aware of the grand theatres that have made the West End the beating heart of London’s culture scene, but there’s more to this city’s playhouses than big-name shows and flashy set designs. Sometimes all you need is four performers, a ghostly tale and a whole lot of instruments, so we took a trip down to the Boulevard Theatre to see how Soho's newest arts venue is making it happen. 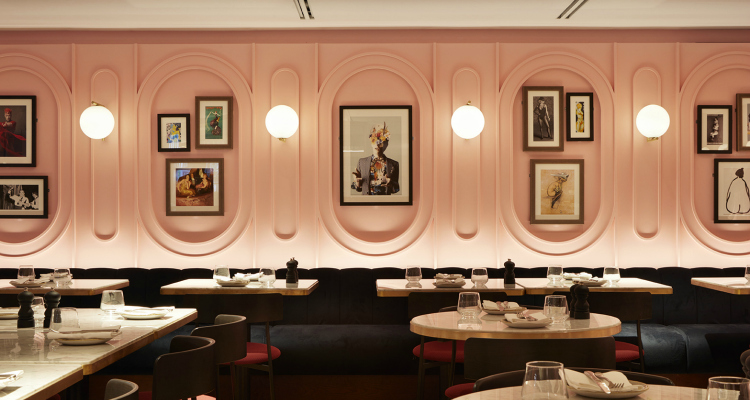 Pretty in pink: Boulevard's in-house restaurant offers interiors as appealing as the plates.

Recently refurbished and raring to go with a fresh line-up of shows, Boulevard is back on the scene and ready to give those hallowed London halls a run for their money. Hidden down a discreet passageway in the depths of Soho, this architecturally-stunning cultural hub doesn’t need to occupy a prime West End location to stand out. Nailing the artsy look of a modern independent theatre, Boulevard’s got a dynamic, clean-cut style from the bar and restaurant right down to the auditorium itself.

We began our night at the pretty and pristine pink in-house eatery, decked out with marble tables and plush velvet seats and located next to a glossy blue bar area. The block colours running through the interiors were really striking, matching the level of drama that diners can expect from the actual performance. Their three-course pre-theatre menu (£28.95) is based around the notion of simple dishes done well, showcasing the restaurant’s dedication to only using the best quality ingredients. My companion and I both kicked off with the whisky-cured mackerel. The fish was perfectly cooked with a nice smoky flavour and a crisp skin, the dainty portion leaving us wanting more. 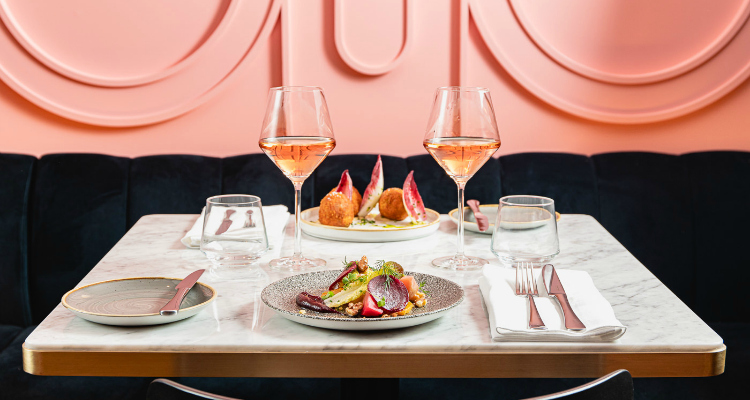 You can tuck into fresh, seasonal food at this Soho theatre restaurant.

The roasted chicken breast was my choice for the main, and like our starter was super tender, sported a crisp skin and came jazzed up with a sweet carrot honey puree. The mackerel had given me a taste for fish, so I also nabbed a few bites of my boyfriend’s Loch Duart Salmon. The slab of salmon was pan fried for extra crunch, but inside was still soft and juicy as ever, served with charred tenderstem broccoli and squash chilli puree. We finished things off with a fresh and fruity dessert to share, featuring a huge cloud of meringue. The hunk of sugary goodness, dressed in lashings of crème fraiche and berry compote, was particularly light, and really filled the gap left by the previous smaller courses.

After dinner we made our way up to the theatre, an intimate space with an innovative layout. Set in the round, the stage, which was eye-level with the first row, forced the audience to get up-close and personal with the action. The play we were treated to was the spine-tingling song cycle Ghost Quartet (£12-£36) from composer Dave Malloy. The plot centres around the character of Rose, and her supernatural journey through time and space to fulfil the demands of a talking bear, who promises to punish her adulterous lover if she seeks out a pot of honey, a piece of stardust, performs a secret baptism and takes a picture of a ghost. We excused the storyline for being a tad strange, due to the fact that it was executed exquisitely. The piece was brought to life by an array of instruments played throughout by the four performers. Music was woven into every part of the production, filling the space with a haunting atmosphere to exaggerate the tale’s many highs and lows and further heighten the tension. 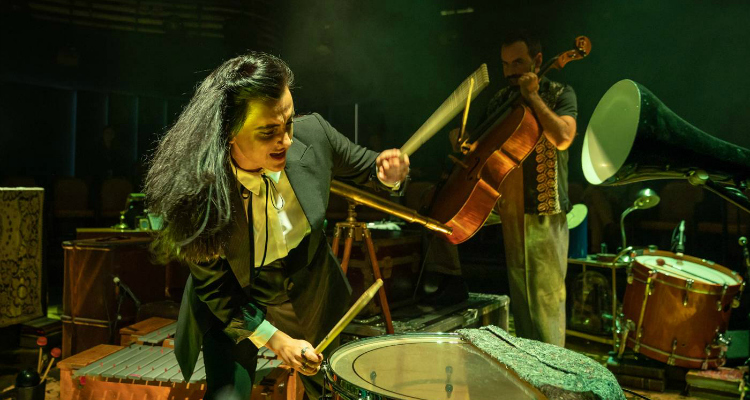 The talented actor-musicians held their spectators in awe. All four were sharp throughout, with their angelic voices and infectious enthusiasm plastering smiles on to even the most reserved audience face. It also helped create willing participants for the play’s more interactive moments - but seeing as this at one point involved the handing out of whisky, no one really seemed to mind anyway. Bouncing from moments that were utterly chilling to scenes that induced fits of laughter, the play was an emotional rollercoaster in the very best way. The whole room became the stage as the action flooded through the audience, a sense magnified by clever sound and lighting that at times plunged the whole auditorium into pitch darkness. At the end, a few unassuming audience members were invited to come on stage and coaxed into playing the instruments, only for the actors to make a humorous exit from the room, leaving the audience to self-consciously perform the last few minutes of the final song on their own – a smart move that surprisingly went down a storm. 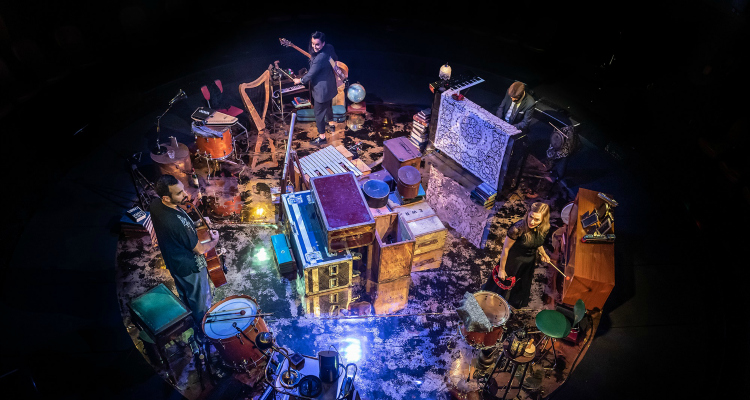 Set in the round, the Boulevard stage ensures the audience don't miss an inch of the action.

Every part of this night felt like something special. We got to eat in one of the prettiest settings, and the unfussy nature of the dishes meant you could really appreciate everything on the plate. As for the show, I came away with goosebumps and a need to get the word out about this cleverly immersive, gripping production. Every aspect of Boulevard represents the creativity that it stands for, and I think London’s culture vultures can expect big things to come from this place.