Italian food; we all know it, we all love it. The classic cuisine is always a safe bet for any dinner date, with everyone having their go-to pasta and pizza dish in mind and ready to order before they even arrive at the restaurant… unless you’re lucky enough to have a booking at Officina 00 in Shoreditch (the love child of Elia Sebregondi and Enzo Mirto).

After making our way through the slick, industrial-style space to our stools in front of the open kitchen, we were faced with authentically made yet unconventional plates. Being a little thrown off by the unfamiliar and playful dishes on the menu, we used the food we spied being prepared in the kitchen to help us decide what to order. 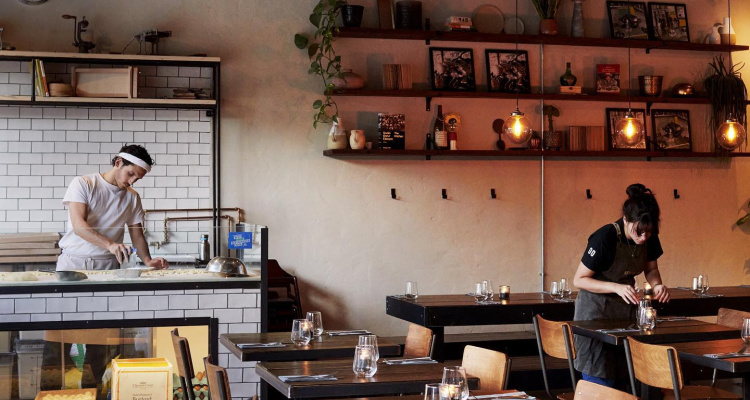 Catch the pasta making process just feet from your table.

Something that particularly caught our eye from the snack menu was the fried ravioli (£2 each). Going against what you’d expect from the typical pasta parcel, they had a crisp exterior with a soft cheesy filling, simultaneously satisfying our intrigue and teasing our tastebuds for what was to come. Aubergine and ricotta croquettes drizzled with honey (£5.50) was the next small plate we got our hands on, offering a satisfying crunch along with a winning flavour from the salty and sweet combo.

Before we moved onto mains we couldn’t help but order in the jumbo ravioli we’d spotted flying out of the kitchen on multiple ocassions. The bergese ravioli (£13) was perfectly al dente, thick enough to have a good bite to it and formed into a mound that was begging to be cut into. Before the knife even reached the plate the rich mushroom and egg yolk based filling oozed out and began mingling with the miso butter that was coating the monster ravioli. We ran each forkful across the plate to lap up as much of the sauce as possible and make sure there wasn’t a drop left. Something to write home about? 100%. At this point we took a gander at the drinks menu for a refreshing sip to cleanse our palate, and ended up finding a drink we never knew we needed (and needed multiple of) until now; a lychee and raspberry bellini (£8.50). 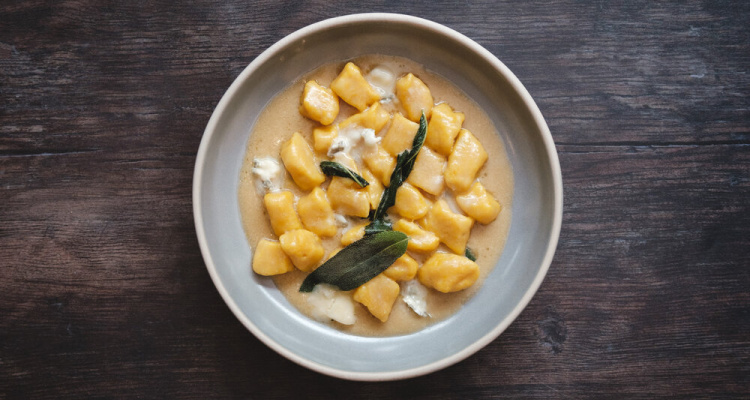 Officina 00 have written the ultimate love letter to pasta in their menu.

We made an arrangement to share more dishes and the two we went for (after much deliberation) were the ‘eyes’ and corzetti (both £11). The clue was in the name when it came to the ‘eyes’; a plate consisting of seven bite-sized orbs covered in a silky sauce and parsley pesto filled with pulled beef brisket. The corzetti was made up of discs of pasta, coated in a creamy wild mushroom sauce mixed in with a crumbling of pork sausage. The sauce clung to the textured pasta and as everything else we’d consumed that night, the flavour was second to none.

If you’re interested in exploring lesser-known Italian dishes and can never say no to a quirky cocktail menu, Officina 00 was made for you (and I think, for me). The plates were undoubtedly the stars of the show; sporting traditional but unfamiliar pasta variations and ingredients for those whose knowledge of pasta dishes doesn’t extend far past bolognese and carbonara. The fresh, affordable and adventurous nature of each menu item means it’s impossible not to fall in love with at least one (if not all) of the dishes and book a second visit before you’ve even paid the bill.