Candy-Topped Quail And 70s Disco: This Is Why Momo Is The Queen Of London's Experiential Dining Scene

You’ve heard of Sketch - of course you have - anyone who’s been three miles off the M25 knows all about those spacey egg-shaped loos, the pastel pink dining room and the notoriously exclusive door policy past 11pm. But it wasn’t this gorgeous, much-snapped plot that made founder Mourad Mazouz his name, rather it was Momo on Heddon Street. And while it might not be quite as buzzed about as its sister, this North African eatery is still very much the talk of the town 25 years on from its conception - we went along to see what it has to say. 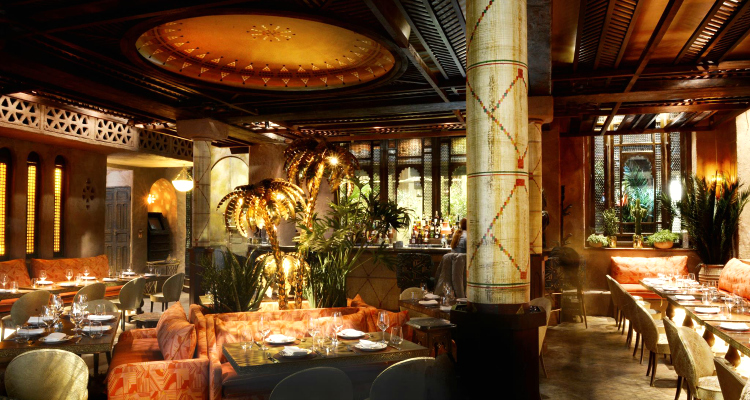 From golden palm trees and exotic prints to an open kitchen, Momo bustles with atmosphere.

As someone who has spent her life hearing ‘your sister is so beautiful’, ‘is Rachel single?’, and ‘really, not half sisters?’, I know what it’s like to live in the lusted-after shadow of a younger sibling. That’s not to say Momo isn’t gorgeous; putting Sketch on your Instagram might be chapter number one of ‘How To Become a London Food Influencer’, but stepping into the Heddon Street spot is like being whisked away from the city altogether. Redesigned earlier this year, the space is inspired by North Africa; a golden palm tree sits beneath a gilded domed ceiling, wooden pillars are wrapped in woven textiles, and everything from tiny cacti and shisha pipes through to silver trinkets line window sills.

The atmosphere bustles as if we’re steps from Morroco’s main medina rather than Regent Street; tens of different languages chatter around us, and to sit down, we have to ask our neighbours to move their table so we can squeeze past. A classic 70s playlist of disco and soul booms from the speakers, and at one point in the night, the lights are turned right down, the music right up and a birthday cake paraded around the room as we all begin to sing and clap; it’s silly, it’s distracting, but most of all, it has me planning my annual celebration here from now on. 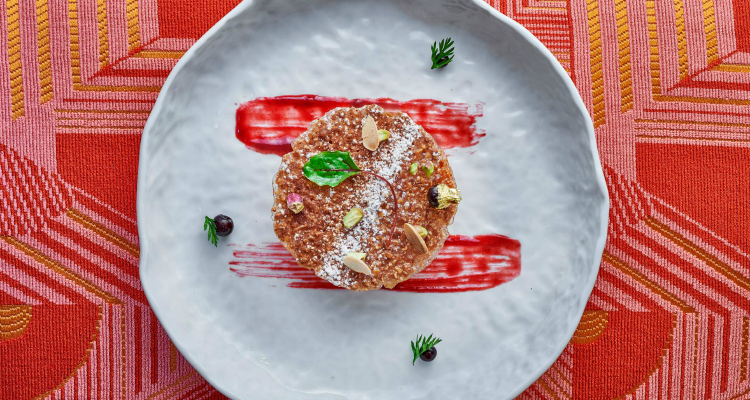 With the riotous atmosphere and abundance of Champagne and cocktails (largely classics), it would be easy to forget what we’re eating, but food at Momo is loud enough to drown out the most boisterous warbling. Inspired by Mourad Mazouz’s home of Algeria and the surrounding countries, the menu is filled with slow-cooked, meaty dishes. Quail Pastilla (£12) encapsulates the burst of sweet and savoury flavours the region is famous for; the warming spice of nutmeg enriching the slow cooked quail meat, with bursts of tart blackcurrants - and most interestingly - a crunch from a candy sweet nougatine topping.

Mains are just as much of an event as the rest of the night; the Classic Momo Couscous (£26) - a carb I would generally class on the duller end - arrives in five flourishes: a bowl of stew, and a further four of meat, couscous, chickpeas, and chilli paste, which can be combined for each palate. Lamb Tagine (£24) is served in an earthen coned-shaped vessel, with stewed shoulder meat that is brightened by poached pears and bites of prunes. For such a decadent meal, our sommelier recommends an equally rich red: the Saint-Emilion by Chateau Truquet (£56), a heavy, structured bottle from Bordeaux that we’re still sipping at the end of the meal. 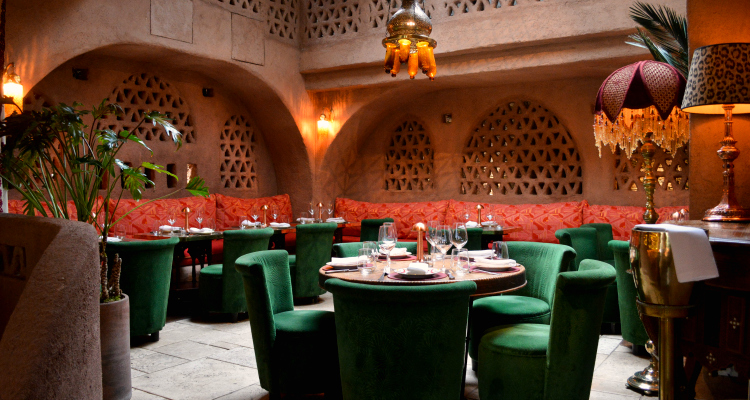 As well as the beautiful restaurant, check out Momo's downstairs bar.

Forget the big and brash Italian restaurants that have got queues for days, and forget Sketch, Momo is the original grand dame when it comes to experiential dining. It may seem charmingly chaotic but is, in fact, planned down to every minutiae detail, from the Fez-wearing toilet attendant who bursts in shouting ‘darling’ while I’m reapplying my lippy to the open kitchen, whose sizzles add to the disco playlist and talents pack in more flavour than a spice market.