If cultural institutions was a question on Pointless, I'd hack a guess that ‘the pub’ would take the number one spot. Whether it’s helping you nurse your Sunday hangover or letting you scream at a big TV in decibels not welcomed at home, like a reliable friend, it's always got your back. I can’t help but notice, however, that the traditional pub isn’t following the rule book like it used to. From pubs with entire floors dedicated to nostalgic games like car racing tracks to pop-up pubs serving nothing but alcohol-free beer, the industry has started to get creative, merging the old with new, creating something unique in its wake. Cue The George. Opening its doors in 2021, this fabulous Fitzrovia haunt has a downstairs that echoes the warmth of the traditional pub but up a rickety hidden staircase you’ll find an secret restaurant with more English sparkling wines than you could shake a stick at. 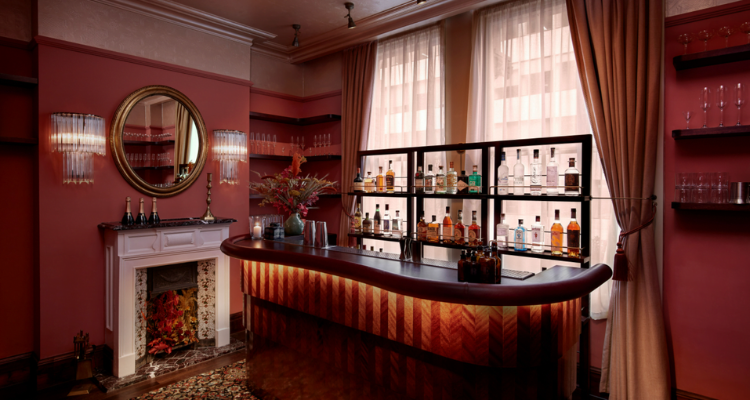 Upstairs at The George stocks over 150 kinds of English wines. Some of which you won't find anywhere else.

The George is an eighteenth century pub and from a glance, you’d have no grounds for arguing any different. The downstairs plays host to mahogany furnishings, bottle green chesterfield booths and red chequered tiles, but not all is as it seems at this historic boozer. For those in the know (like little old me), there’s a hidden dining room and English wine bar upstairs named ‘Upstairs at The George’. After giving my reservation details to a friendly member of the staff behind the bar, we were led to an unassuming door with a narrow, carpeted staircase that led to an eye-wateringly gorgeous space. Full of character and cosy corners, the dining room is acutely intimate with velvet upholstered arm chairs tucked into mahogany tables, large persian rugs and dainty decor that would trick you into feeling like you’re popping around to a very rich aunt’s house rather than James Knappett’s new(ish) restaurant. 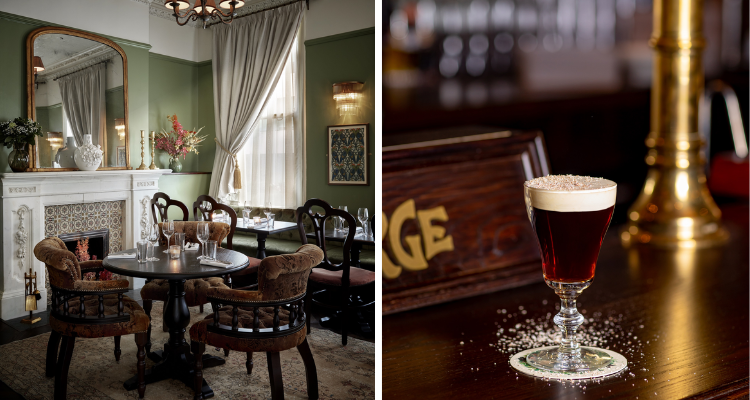 Expect interiors worthy of a catalogue and expertly handcrafted cocktails.

Settled into our seats with two glasses of sparkling rose from Winston Estate in Sussex (£13.50), we toasted our bubbling flutes to our evening ahead before buying our heads in our menus to coordinate orders. After little discussion, we swiftly agreed on the dressed crab (£19) and the 1/2 pint of North Atlantic prawns with Marie Rose sauce. Served on a bed of crushed ice, a generous portion of pearly white crab meat with herbs and finely grated egg came packed into a pale pink shell. The dish was drastically fresh and I had zero shame when I went hunting for any crab meat that managed to escape the baby pink shell and onto the crushed ice below. The ½ pint of prawns (£16) also went down a treat at our table. Five prawns in and my plus one had the hang of de-shelling the mini prawns in a matter of seconds, dipping the juicy ends into a lip-smacking Marie Rose sauce. The Scottish langoustine scampi and chips (£35) was a non-negotiable for both of us and when the plates arrived at our table, we knew we had made the right decision to order it times two. Gigantic langoustines were bubble wrapped in crunchy golden breadcrumbs with ramekins of tartare sauce, crushed minted peas and crisp, triple cooked chips. Impressive by presentation and even more impressive by taste, each mouthful was a trip to foodie nirvana. 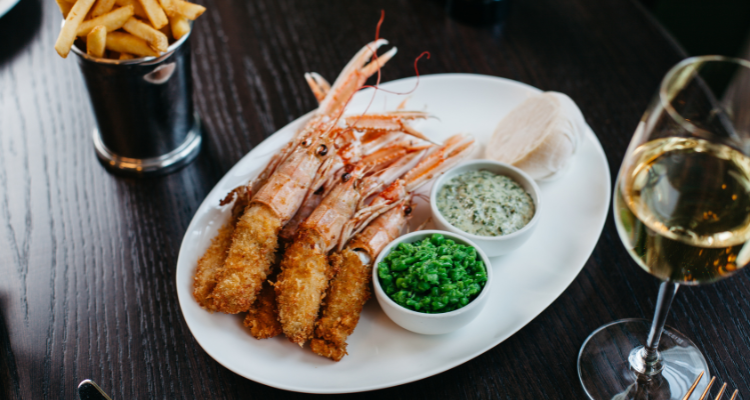 Langoustines so large that they would make your date uncomfortable.

It turns out that being in nirvana doesn’t quite stop you from overeating, meaning one dessert was shared between two. The old reliable sticky toffee pudding with clotted cream, and caramel sauce (£8) was a bit of a let down (the sauce was slightly burnt) but the sponge was moist and sprung back into place after every large spoonful. Never one to shy away from having ‘one for the road’, I ordered the restaurant's ‘B & B’ old fashioned (£14). Swirled with bread and butter Glen Moray, PX sherry and a dash of bitters, this old fashioned was a no-nonsense representation of mixology, strong in profiling and excellently balanced.

Going to the pub has always been part of my life, even as a child I’d be propped up on a seat beside my parents with a packet of Cheese and Onion Walkers and a pool cue to keep me quiet. It’s got a knack for making your shoulders come away from your ears after a tough day and it’s a great (if not the only) place for the hair of the dog. So it’s been fascinating to see how it's evolved along the years, tip-toeing in a direction that means you can play video games and drink alcohol-free Guinness, but the best example I’ve seen and experienced first hand, has to be at The George. The food at this hidden treasure is nothing if not Michelin-worthy thanks to James Knappett operating at the helm. Not only that, the staff are incredibly knowledgeable with the discerning skill of making themselves aloof, only to pop up quicker than Mary Poppins when you need something. A real hidden gem, it won’t be long before word gets out about its abnormally large langoustines so do yourself a favour and book a table before the crowds start to form.