In between zebra-crossing-ignoring cyclists and an orange despot running America, it can sometimes feel like there’s little good in the world. But take a step back from Twitter hashtags for a moment and humanity doesn’t look all that bad; take Beyond Food, for example, a charity that helps homeless people to find meaningful employment as they train for a year in The Brigade’s kitchen.

Battle your way through the speed-walking suits of Tooley Street and you will eventually be rewarded with The Brigade, a former fire station that’s been transformed into a modern restaurant. In fact the spot is so stylish that we almost walked past it, looking instead for something a little lower key. Greeted by the maitre d’, we were led past the long granite bar and round to the bistro-style restaurant.

The eating space is Smart (with the capital ‘S’), as black walls are broken up with a stretched canvas, floor-to-ceiling windows at the front and monochrome photos of London. It’s the open kitchen that’s the real centrepiece of the room; a huge arc from which light, tables and the gentle clatter of working chefs spools out. Private rooms are just as sexy, and perhaps to make up for missing out on the action of the kitchen, the downstairs space is painted a vivid shade of turquoise, with huge candelabras topping tables and a thick velvet curtain pulled across. Despite being a Tuesday, the eatery hummed gently with professionals and even a date or two. 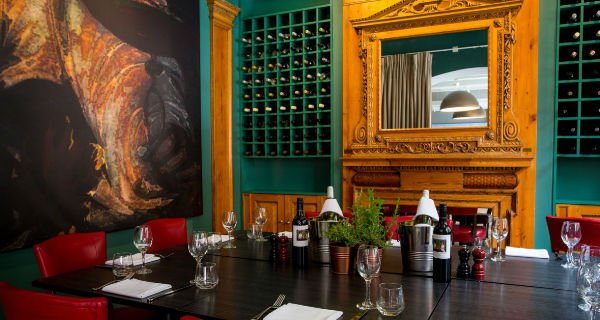 The Brigade in Southwark has a range of private rooms, along with a communal dining space and open kitchen.

From Michelin-starred restaurants to cooking for Saudi Princes, Simon Boyle, the founder of Beyond Food, has had a distinguished career. While British cuisine may usually mean Wetherspoons’ curry club on a Thursday, under Boyle's seasoned eye, the menu sings of a British love affair, with UK-sourced produce and traditional recipes given an inventive tweak. Starters range from game through to seafood; with a thick, smoky chicken liver parfait that was offset by a tangy port and cherry chutney (£9). The Scottish scallops were just as rich in flavours, with two pan-seared scallops salty against a purple cauliflower puree and charred chunks of the vegetable (£12.95).

Mains are a meat heavy with a few crowd pleasing choices thrown in. The fish, in the fish and chips (£15), was encased in a perfectly light and crispy batter and managed to avoid the greasiness that usually plagues the Nation’s favourite dish. I opted for stuffed rabbit leg (£20) which was as comforting as a Christmas jumper, with a bean stew, apricots and pancetta. Pudding came in the form of butterscotch pear oat and hazelnut crumble (£6), an inventive take on the Sunday dinner classic, and so good it had us battling spoons for the last scoop. The Colombian Chocolate Tart (£8) was freshly made an hour previously and was a dark and bitter slice of cocoa heaven, saved from being overwhelming with a sharp orange sorbet. 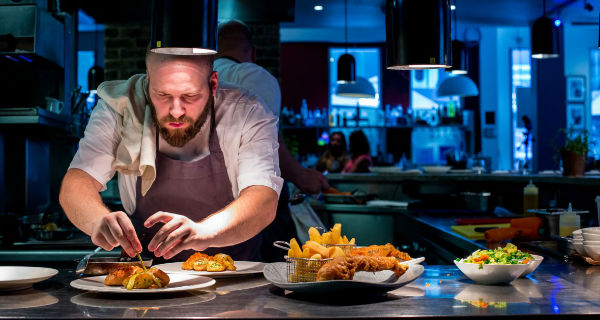 From fish and chips through to Shepherd's Pie, the menu at The Brigade is an inventive take on British cuisine.

We all say we want to do good but when it comes to the nitty gritty of helping out, most of us fall short. The Brigade is the best of pretty much every world, with a British menu so good that it offers a glimmer of hope to the post-Brexit dining scene. Plus, every dish you eat is helping out the homeless community with meaningful and life-changing employment; so fellow humans, go forth and do your bit, by stuffing yourself full of The Brigade’s delicious food.