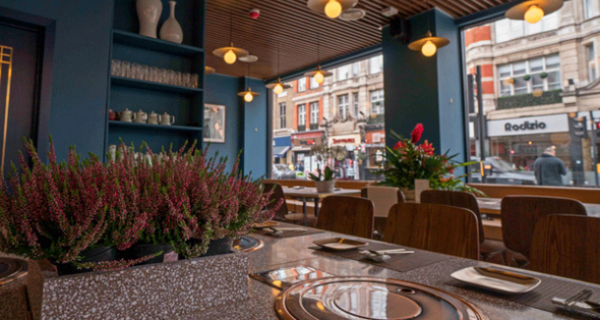 BBQ and Korean-inspired flavours at Olle.
From sushi-making classes in Soho to self-serving grills on the Southbank, this city’s foodie scene has proved time and time again that we’re mad for a cook-your-own concept. A fact not wasted on the recently-opened Olle; a Korean BBQ restaurant where you act as the head chef, sizzling a selection of East Asian-spiced meats, seafood and veg - all from the safety of your seats. Perched on Shaftesbury Avenue just on the edge of Chinatown, the restaurant was launched by Charles Seo, the brains behind sister and neighbour restaurant, Kyoto Soho.

On entering it’s a fairly familiar affair for this area of town; a simple interior, buzzy atmosphere and an omnipresent wall of aromatic scents constantly wafting over from the food. Head downstairs though, and you’ll find this little hub’s star of the show: their in-table circular grills, with a particularly impressive larger table with a BBQ centrepiece for bigger groups.

Menu-wise, it’s a flavourful affair, spanning meaty favourites in their waygu streak and Iberico pork, to more traditional tones from their Korean Jjigae served in a stone bowl (my favourite on the night) and rich Korean style dumplings. Though you’re left to your own devices in terms of how well you like your meats cooked, the waiters are on hand to give you some guidance on best practice, and also to talk you through the dishes.

I love BBQs and I love Korean food; so I was always going to be smitten with Olle. What really stands out about this place actually isn’t the cook-your-own element though, it’s the thought they’ve put into the traditional-meets-modern menus, and obvious approach to fresh produce and cool interiors - while still being relatively inexpensive. Head and shoulders above most of its local competition, this place is sure to be a Central London go-to in no time.