The words ‘monkey fingers’ mightn’t mean much to you, but they mean the world to me. Okay - maybe not the world (that’s a bit dramatic), but they mean a lot. Before you jump to conclusions and think I have a peculiar penchant for the fingers of actual moneys - I’m on about those little battered beauties at MEATLiquor. Still don’t know what I’m talking about? You better grab your spectacles and read on, mate.

MEATLiquor was a bit of a bitch to find. This might be half owed to my shit sense of direction, but it’s tucked away at number 6 St Chad's Place, and you have to travel through a walkway - that’s worthy of making any man or woman semi claustrophobic - to get there. After a couple of double-takes and a few ‘it can’t be down heres’, I came face to face with the venue. Sauntering into the new King’s Cross plot, we were met with the familiar theme that runs throughout MEATLiquor's other sister sites.

Colourful cartoon illustrations belted out speech bubbles from the walls, the ceilings were as high as my food expectations, with beautiful stained glass windows; and a huge bus model covered in graffiti was the home to the venue’s kitchen and bar area which was pretty unique. The place also had a warehouse feel about it with massive wooden beams overhead and simple wooden tables sprawled across the floor. Edgy and undoubtedly cool, this new MEATLiquor hangout nailed its look. 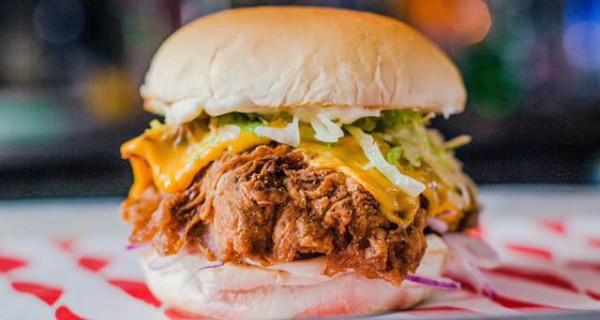 The prettiest patties in all the land? You'll find 'em at MEATLiquor.

Starting your night with a round of cocktails is a right of passage when you work for DesignMyNight, which is why we began things with a dry daiquiri - Bacardi Carta Blanca Rum shaken with fresh lime juice, Campari and passion fruit; and a silver angel - Finlandia Vodka shaken with peach and passion fruit, topped with fizz. Served in an ice-cold coupe glass, the dry daiquiri had a sharp edge, and the silver angel was a thirst-quenching serve with fresh and fruity notes. Drinks out of the way - we ordered from our waitress, and minutes later we were presented with all the food. With no forks or knifes in sight, we took things back to basics and tucked into our fried feast with our bare hands.

Distinctly labelled as ‘fries’, ‘not chips’; MEATLiquor offer seven different styles of fries. Seven. But the option printed at the end of the menu gave me no choice but to ignore the others. Our buffalo fries £6 were served with a generous portion of house buffalo sauce (that you pour yourself), and fistfuls of crumbled blue cheese. Mopping up every last bit of the house sauce with the shoestring style fries - the trio of ingredients were on the money.

Although MEATLiquor is famed for its dead hippie burger, we opted for the chicken parma burger £8.75 and the bacon cheese burger £8.75. The chicken parma burger was everything it said is was gonna be. A fried chicken fillet with serrano ham, melted mozzarella, marinara sauce, and Italian cheese came sandwiched in between two perky buns, and although I didn’t try a mouthful of the beef burger - it done a disappearing act from the table pretty sharpish. Now, for the main attraction: the monkey fingers £7.75. Just as I remembered, little battered pieces of chicken came out piled high, gleaming in a homemade hot pepper sauce, and each time I dunked a strip into some blue cheese sauce, I instantly felt more alive. If I were to make a list of the 10 best things I've ever put in my mouth - monkey fingers make the cut - no questions asked. 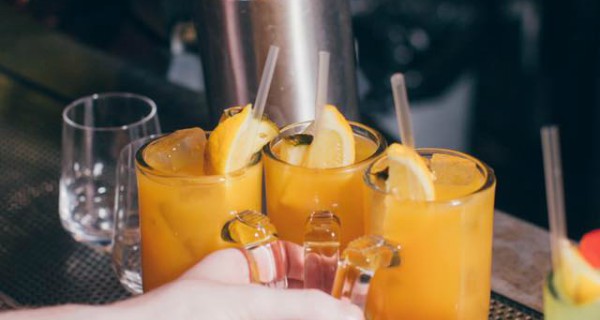 A long list of cocktails, craft beer and wine are at hand to help you wash down your grub at MEATLiquor.

Does this review even need a conclusion? I don’t think it does, but just to summarise - MEATLiquor is bloody brilliant. The burgers are known as some of the best served in London, there are seven different types of fries to choose from, and they are the creators of one of my fave things in London: monkey fingers.