The northern end of King’s Cross is having a bit of a moment right now, with new development Granary Square overhauling the area and ushering in likes of Dishoom, The Lighterman and Caravan. But it’s worth turning your attention southward, as on Marchmont Street behind The Brunswick Centre, newcomer French bistro Bon Vivant is sizing up to these heavy hitters and offers the best all day dining spot this side of the station – just proving that you don’t need to hop on a nearby Eurostar to taste delicious French cooking.

With its candy-striped canopy and blue and white woven French bistro chairs – Bon Vivant (literally – a person who likes the good life) is pretty as a postcard on the corner of the street and looks every part the Parisian bistro. Inside, Breton-clad waiters chatter in French, sound-tracked by Edith Piaf and Jacques Brel. Plush navy velvet chairs and flickering candles set a romantic mood, but dusty pink walls and chic gold minimal fixtures give a modern twist – the humble bistro just got a 21st-century update. 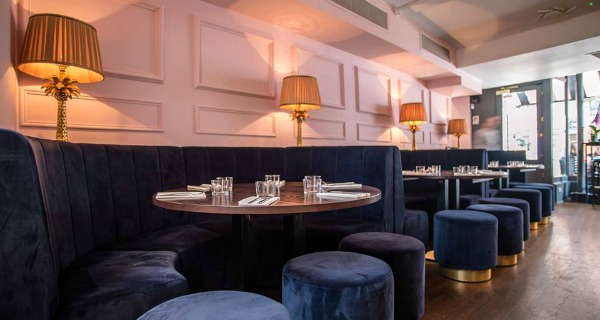 Bon Vivant feels like the ultimate in Parisian plush.

Francophiles rejoice – the menu is Parisian through and through, will all the classics you’d expect to find on the menu like Magret de Canard (duck breast, £23) and Terrine de Foie Gras (£11.50) – it put my sub-par A level French to the test. The charcuterie boards are huge at £10 and come stacked with three types of ham, terrine, cornichons and slabs of freshly cut baguette. I shared with a friend but they’d be great for about four people to share.

The flat iron steak bavette (£16) was flawless. Arriving pink in a red wine jus with all of the flavours of the meat, my friend said that eating his steak was like “cutting butter” it was so tender.  It’ll be a dish I crave before midweek lunches, or re-order in London restaurants just to be disappointed. It is the real deal. Together with buttery green beans sprinkled with rock salt and cheese-crusted and creamy dauphinoise potatoes (both £4) I was ready to leave my quinoa superfood lunches behind and up sticks to Paris to live a new life where my days consist of eating things that were bad for me, but tasted delicious. It’s a wonder that French women have such a tendency to be slim and chic when surrounded by such incredible food and wine.

We found room for a slice of chocolate and salted caramel torte (£7.50) which arrived with a deep red blackcurrant sorbet – something I’d never seen before but didn’t have much time to before it was gone. The whole thing was indulgent as hell and I didn’t want to share a bite. 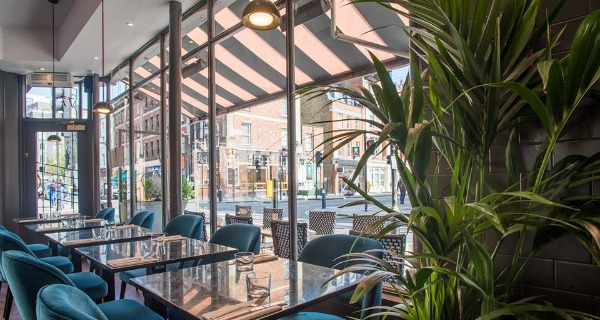 Enjoy the drips of natural light that come through the restaurant's front windows.

There are places that you go for dinner and think nothing of, and places like Bon Vivant, that you’ll recommend to friends, colleagues and anyone who’ll listen. There are so many great restaurants in London that you never need to go to the same one more than once, but this is one I’ll definitely be revisiting.