True ‘24-hour city’ status is only bestowed on a few places around the world. New York – the ‘city that never sleeps’, and increasingly, cities like Seoul and Amsterdam are vying for the title. But London took a step closer last year with the advent of the night tube (its first birthday is in December) and with the introduction of the new post of ‘Night Czar’, held by Amy Lamé – London got a new lease of life amid dozens of nightlife venue closures.

VQ Aldgate (along with Duck and Waffle just a short hop away in Liverpool Street), joined to the Dorsett City Hotel, offers 24-hour food and drink service. Positioned on the busy strip near Aldgate East tube station and the City, I can tell it’s going to be a godsend for any busy office workers stranded after the last train, or, let’s face it, me on the shlep back to Bethnal Green after a night out after the thought of VQ’s sticky pork ribs crosses my mind at 3am (more on that later).

Hotel restaurants rarely become stand-alone destinations in their own right, and VQ Aldgate’s entrance is back from the main road, down an almost-hidden side alley. But this only will help keep out unwanted drop-ins and gives the restaurant a hidden gem feel. There’s a terrace facing the churchyard opposite which will be great for summer. The dining room when I visited smelled like fresh paint and new leather booths and funk, Motown and soul blared from the speakers – it’s as though the classic American diner interior has been given a British update. It’s no-fuss and sophisticated, just like the food it turns out. I spied quite a few solo diners – VQ is a personal approach to the hotel restaurant. 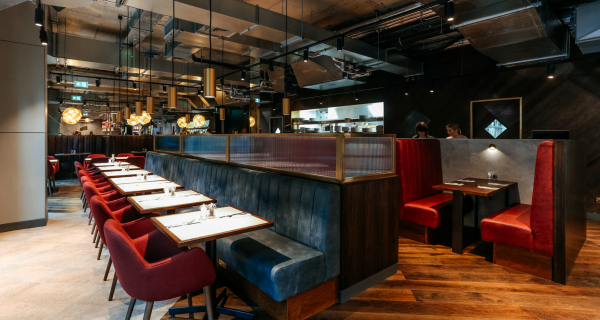 A fresh and casual appeal dominates the dining space at VQ Aldgate.

An all-day breakfast menu takes pride of place with a mix of pancakes, porridge and full English front and centre. Instead we opt for the Mezze plate (£6.95) and the Merguez sausages (£5.95) to start and share them both. Doughy steaming flatbread arrives with lashings of hummus and roast vegetables and the sausages are rich and meaty. My friend chooses the Lamb burger (£7.95) and I can’t resist the BBQ Baby Back Ribs (£12.50). It’s worth mentioning that I spent a good five minutes deciding whether to for the whole or half rack. I went half – and I couldn’t even finish them. Reader, take that as a challenge. The burger arrived with crumbled feta and sprinkling of pomegranate seeds in a brioche bun. The mixture of textures and sweet pomegranate made it taste light and as healthy as it’s possible for a meaty lamb burger to taste, and it came smothered in red onion relish. The ribs arrived smothered in sticky sweet BBQ sauce and arranged on the plate with lashings of creamy coleslaw underneath (although a bit too much!). The meat fell from the bone and was incredibly tender. I was unsure whether to dive in with my fingers it looked so posh, but I did anyway, because I’m not the type of girl who eats ribs with a knife and fork and never will be.

For dessert, I could lie and say my friend and I shared a warm chocolate brownie with chocolate sauce and ice cream (£5.95) but that would be a lie because he didn’t have time to touch it and I finished it all myself. 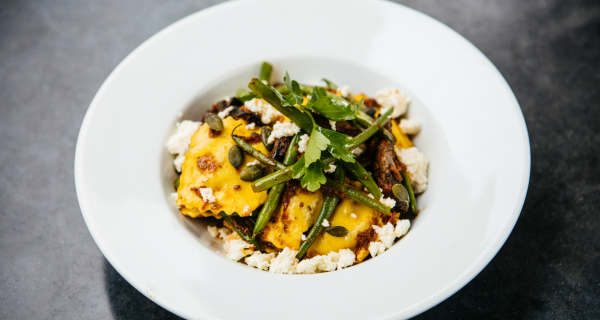 The textures and flavours at VQ Aldgate are consistently impressive.

There’s plenty to like here – you can bring your friend who’s a fussy eater, your friend who’s broke before payday, your visiting parents who haven’t grasped the concept of ‘nose-to-tail’ dining or foraging or whatever new concept they’re raving about up in Dalston. My one gripe? The toilets are about five minutes away along a corridor, up in the lift and along another corridor. I’ll be back VQ, though probably at 4am and a bit worse for wear. Long live London’s nightlife.