Having visited the Hoxton site not too long ago, I was eager to try out Radio Alice Clapham and see whether it could live up to the cloud-touching high standards of its sister venue. Named after a pirate radio station in Bologna, the pizzeria has been turning heads with its unique dough-making technique and its cool vibe. Making the yuppie commute from Old Street to Clapham Common - with what seemed like every other 23-year-old in London - and stepping out onto Venn Street, the fresh dough smell told me that this was going to be a great night.

Venn Street is the perfect setting for a serene, casual-dining pizzeria like Radio Alice. Neighbouring an independent cinema and a bustling cocktail bar full of vintage records, the relaxed atmosphere matches Radio Alice's airy vibe. Heading down on a sunny Thursday night, the street side tables were all packed with locals who couldn't resist the charm of the canopy of fairy lights that roof the promenade area. Inside, the venue's exposed brick walls, brightly painted walls, green plants and black and white framed pictures all make it look like the kind of Italian restaurant that Hepburn, Chaplain and co. would have hung out in.

At the back of the venue squats a huge steel oven that pours out that fresh dough smell and leaves your stomach loudly rumbling from the get-go. Propping up the rough-around-the-edges look, the tabletops have purposely been kept simple and timeless; just a shiny knife and fork, a small plate, a folded napkin and a simple glass for water. And just went you thought the venue couldn't get cooler, your ear catches one of the speakers, which plays actual cassette recording of old Radio Alice DJ sessions. Who knew the people of Bologne liked funk and soul so much? 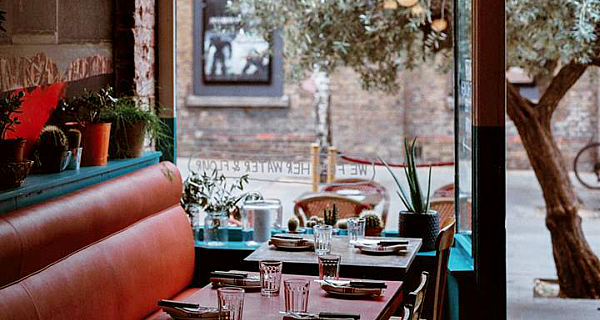 Dishevelled-chic and yet with just the right amount of sophistication, Radio Alice has to be up there as one of the coolest spots in town.

The mantra at Radio Alice is refreshingly simple and complex at the same time. As with most things in life, it's all about the dough. Brothers Matteo and Salvatore, the masterminds behind Radio Alice, have used traditional recipes from Bologna, alongside a few new tricks, to make sure that their pizza crusts are crispy on the outside while being soft and light on the inside. They do this by using organic stoneground grains, mother yeast sourdough and allowing each mixture to rise at room temperature for at least 24 hours. That might all sound like jargon to you, but the result is truly amazing - crunchy crusts with giant air pockets.

But before we dove into the main event, we started off with a plate of burrata (£5.90), a tomato salad (£6.50) and a portion of sourdough bread, served with butter and thinly sliced anchovies (£3). Each dish was stunning. The tomato salad was brought to life by capers, olives and Tropea onions, and the taste of sourdough went nicely with the salty taste of the anchovies. But not for the first time, the burrata overshadowed every other starter. Holding shape despite being impossibly soft, it was finished with a drizzle of olive oil and a generous sprinkling of black pepper. Quintessentially Italian, it set us up perfectly for the main courses.

We opted for the red base Nduja (£11) and the white base Prosciutto di Parma pizza (£13); two polar opposite choices that both showed off each dish's unique taste and highlighted the refreshing sensation served by every Radio Alice plate. The Nduja (spicy Calabrian sausage) had a chilli kick that was balanced by the sweetness of the basil-infused tomato sauce and the thick Caciovalo cheese. Each bite sent a warm feeling spreading outwards from your mouth. In complete contrast, the white pizza offered a much smoother taste. Topped with thin slices of prosciutto, the Burrato and Fiordilatter mozzarella combo twisted together rich, salty flavours and a smooth texture. But it was the orange oil drizzle that took each slice to another level. Providing just a subtle hint of orange flavour, it worked with the crispy dough to offer an earthy taste that cancelled out boisterous cheese just at the moment it began to overpower the dish. A must try, for sure.

I opted for a simple affogato (£5) dessert to sign off the meal. The back-to-basics approach and straightforward combination of flavours of the dish - and every dessert on their menu - sums up why Radio Alice's kitchen is such a hit. Unlike most pizzerias, you aren't left feeling as if you're on the verge of contracting gout or with a heavy, greasy feeling on your chest. Instead, you walk away comfortably full, having enjoyed a chill-out dinner and with a selection of authentic flavours dancing on your palate. That's the real secret behind Radio Alice's charm and success. 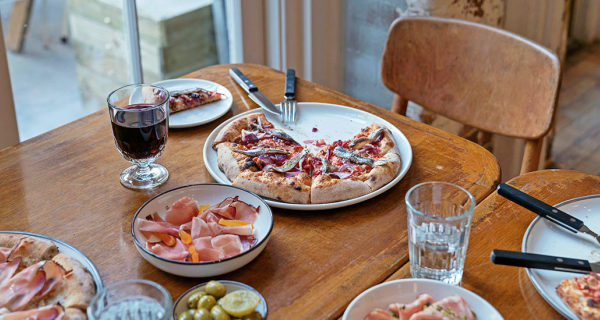 Each dish at Radio Alice is made up of subtle flavours that work together to create a great-tasting, well-balanced plates of food.

I'll happily admit that I've got a huge crush on Radio Alice Clapham. The venue holds two fingers up at the hipster pizza joints that take more and more authenticity away from each slice and replace it with bizarre, 'quirky' toppings. And in truth, it's nice not to eat £4-per-slice pizza, served by someone that either hates socks or loves the feeling of fresh air around their naked ankles. But leaving my personal vendettas aside for one sec, the coupling of authentic flavours with an objectively cool atmosphere is something you don't see that often anymore. The team have mastered it and are, without a doubt, on their way to big things.