It was January 2018 and life was crap: a cash machine laughed at me when I tried to withdraw the two flies in my account; my Dry January crashed into a 12-hour binge-drinking fest in the most predictable plot twist since Pirates of the Caribbean 5 being terrible; and I haven’t felt the sun on my skin in so long that I’m not even sure it exists anymore. After that horrible month ended, I decided the only thing that could save my life was appeasing my belly. So with that task in mind I ended up at Broadleaf, ETM Group’s latest venture into gastro-bars, hoping their hearty British food could chip the frost off my heart.

Having visited a few of their pub venues and only one of their chic-y bars (Aviary), it was comforting to see Broadleaf still possessed that middle class welcoming vibe, like a very well-executed blanket. But this venue more than the others felt younger, maybe to do with the crowd, maybe to do with the fusion of city-ish-traits and more purposely retro aesthetics. You’re greeted with floor-to-ceiling windows with that black tint you only get if you open a venue near Bank, but once inside, the place starts to develop a personality of its own. The art deco bar boasts huge brass beer vats at the very top, with stripped-back industrial fittings on the ceiling, giving the bar a speakeasy-meets-modern-London feel, and it works.

To the far side were huge booths filled exclusively by groups of young professionals having their mandatory catch-up, and more intimate one-to-one tables designed for dates (no date for me, just my housemate from university, which is the opposite of a date). Across the side are shelves filled with old assortments and trinkets, as well as their trademark weird taxidermy animals, which may have felt out of place if I was an interior designer; as a punter it gave the open-plan dining area a separate if eccentric feel. It was pretty busy the Thursday we visited - and felt genuinely alive. The music was house, which might seem an odd choice when people are eating and not in Piccadilly Institute, but it wasn't obtrusively loud and added to the vibe. The place kept throwing odd balls at me and they kept getting knocked away. 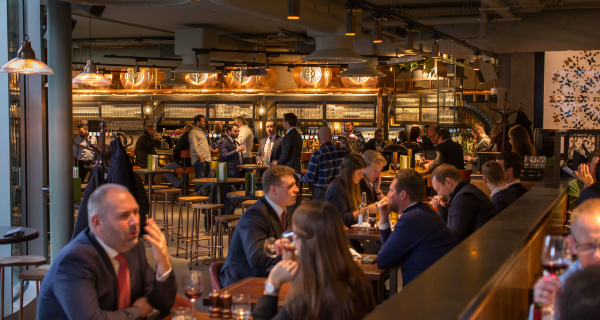 The big front windows means that, like me, it's one of those things that get sexier as the night falls.

My friend works in a bank, so my testosterone dictated that I take control of the wine menu and pick a bottle for us. I pointed at a reasonably priced Riesling called Allegory (£29.50) to our waiter and was delighted when the drink arrived fresh, light and effortlessly drinkable. On that note, our waiter was attentive and hilarious without being overbearing; i.e. absolutely excellent at his job.

To start, my friend ordered the shrimp and bacon croquettes (£7) with aioli, which were creamy and tasty from the miniscule portion he left me to try. So he definitely enjoyed it, then. I opted for the duck liver parfait (£9), with spiced cranberry jelly and toasted brioche, because I’m a fancy lad and know how to pronounce parfait. I couldn’t taste the spiced cranberry jelly, though it gave the actual parfait some texture. The dish as a whole was delicious and my favourite of the night, managing to be smooth and wonderfully layered. This is one to order.

After telling my basic mate that he could eat a burger in McDonalds and to try something different, he chose the painfully British Pie of the Day (£16) for main: a steak and ale pie with the kind of crumbly pastry that normally only exists on the boxes in supermarkets. The sauce was appropriately rich too. My slow braised Cumbrian Longhorn short rib of beef (£18), with Dauphinoise potatoes, glazed shallots, and braising juices, arrived pretty as a picture - literally, I made us wait a good five minutes for me to get the right Instagram shot. The beef was so flaky that I almost melted with it when I broke some off, though it was a little bit tough upon chewing. Those braising juices, however: that’s what you’re here for. I could take a bath in those braising juices. I want to be cooked in those braising juices.

We finished the meal with two glasses of Ferreira 10 Year Tawny Port NV (£6.30), attempting to solve the world’s problems and enjoying some, as the kids say, #MadBants with the waiter. I felt like I was going to come back here soon. 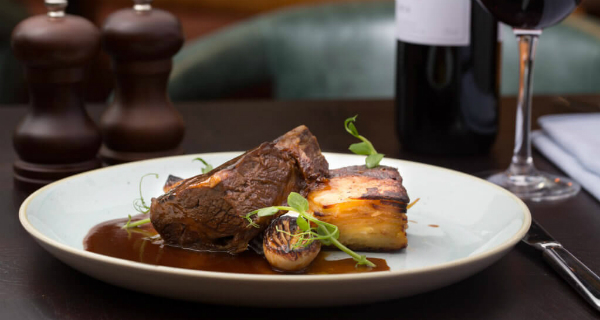 My Instagram was somehow prettier than that - must have been the mood lighting.

On paper, Broadleaf has attributes I’d normally turn my nose up at: city location, mishmashed design, a British menu, and music from this decade that’s not Lorde. But the venue does nearly everything right. The food is amazing, the design turns out to be a bit charming, the staff are wonderfully friendly, and looking around the room, there wasn’t one group of people who looked bored. And when the winter gets you down like this one has, it proves good bars and good company are the greatest remedy.