Can You Sex Up A Prawn Cocktail? We Went To 60s-Inspired VIVI To Find Out

THIS VENUE HAS NOW CLOSED.

Set in one of the ominous tower blocks that fill central London, VIVI has already had its fair share of controversy. There’s its home - a grade listed building that spent a decade empty and which has now been repackaged and resold to the ultra wealthy. There’s been a few unfavourable reviews, and there was the fire alarm that went off four times during our visit; we went down to see if this pretty new space could convince us otherwise. 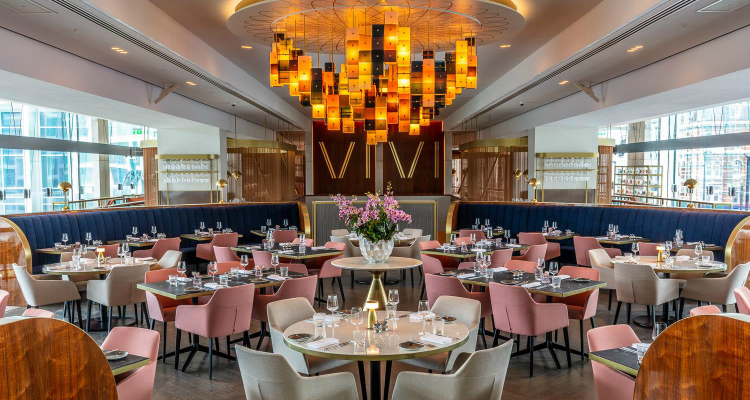 A huge space, VIVI is separated into cosier areas with banquette seating and longer tables that overlook the street.

1966 may conjure up images of the swinging sixties and flower power but for VIVI it's a far more Mad Men-esque aesthetic, with a polished tribute to the era; from its name (roman numerals for that year) through to a menu that pays homage to a decade of home dining and British cooking. The Rhubarb Group - also of iconic Sky Garden - are the folks behind the restaurant, and once again they’ve proved a dab hand with interiors. Any nods to the decade go largely over my head (being born 30 years too late), but from the POA of a ‘90s kid, the spot has got enough eye-catching features to fill an Instagram feed, from the building-block light feature, through to the splashes of brown and metallics.

We start with cocktails at the bar; a golden arc surrounded by tall chairs and after-work drinkers. From Sweet Nothings through to Jackie’s Kennedy, the list is inspired by songs, rock stars and socialites from that decade of love. I opt for the Pink Floyd Rhubarb (£12), a short, candy-pink coupette that’s not far from drinkable sherbet, with a mix of Chase rhubarb vodka, Cointreau, cranberry juice, vanilla essence and lime. For dinner, we are moved into the snug heart of the expansive space: a circle of royal blue banquette seating and pastel chairs. 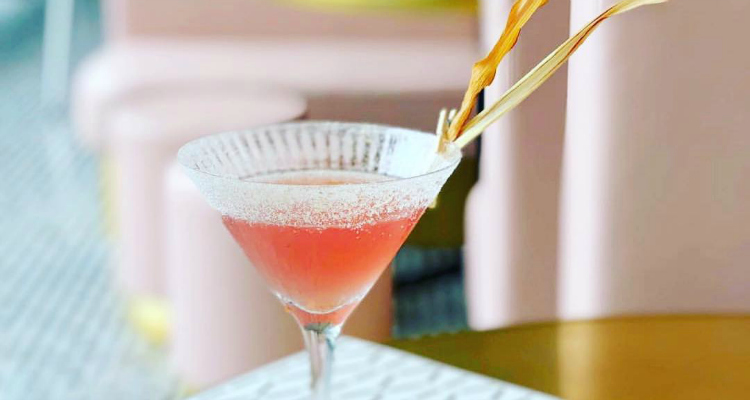 No prizes for guessing who the Pink Floyd Rhubarb is inspired by.

Sexing up a prawn cocktail was never going to be an easy job, but VIVI has done their darn hardest, creating a food menu of 60s dishes, with added indulgence. A puff of souffle (£13.50) sits on top of roasted red peppers, the freshness of the vegetables cutting through the thick cheddar cheese sauce. Forgoing the lighter salads, I head straight for more indulgence: a soft, doughy pastry filled with gravy, chestnuts and steamed venison, and mopped up by a swirl of mashed potatoes and a few carrots. Despite having bloated like Augustus Gloop, I continue in my gluttony with the famed rum baba (£8.50) - a great baton of soft cake that oozed punchy chantilly when stabbed with our spoons.

Anyone looking for the rock 'n' roll days of Beatlemania and the miniskirt furore should look elsewhere when it comes to the '60s. VIVI is a tribute to the swinging decade, with feet firmly planted in a generation of Instagrammers, perfect brows, and protein shakes - a must in this restaurant climate. It's also seriously pretty, with a gorgeous mix of blushed pinks, golds and standout features, along with a menu that's genuinely different, albeit on the pricier side.