Indian ravioli and gold cutlery: check out what we thought of Hankies

With already a popular outpost in the heart of theatreland, Hankies has brought its unique brand of “Indian tapas” to Marble Arch. But don’t let the term “Indian tapas” put you off. Nor the fact that it’s on the ground floor of the Montcalm Hotel in Marble Arch (because who isn’t at least a bit suspicious of a hotel restaurant?). Or the name actually, which comes from the slang term for paper-thin rotis that the restaurant is famous for, rather than what you use when you have a cold. Hankies has a near-perfect rating on TripAdvisor, and news of a new kid on the restaurant block travels fast in London.

There is one word for the interior: gold. There are gold lamps, golden-hued leather seats, warm golden wallpaper and even gold cutlery – but it actually looks tasteful rather than Kim and Kanye gone wild. When I visited on a Monday night, the restaurant was packed, with people entering through the hotel entrance and the Upper Berkley Street entrance, just a couple of streets back from Oxford Street. 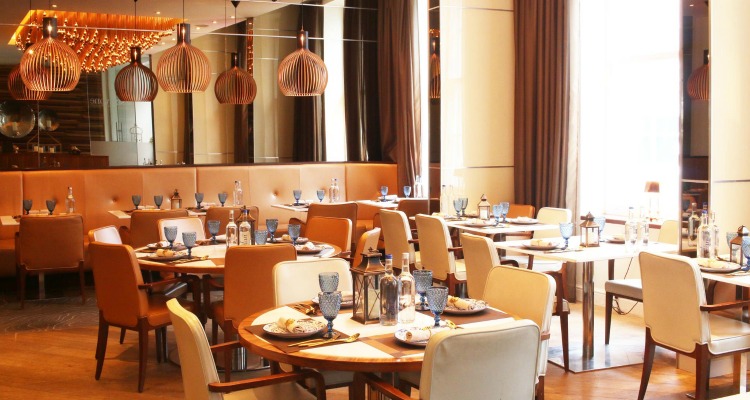 More than just garnished in gold, Hankies is a sea of it.

Chefs swing around elastic roti dough with practiced deftness before inflating them on a roomali tawa grill – these are the restaurants specialities and we ordered the bright green spinach roomali (£3.50). These “hankies” come stuffed with spiced feta, roasted tomato and homemade garlic herb oil. Not your typical Indian ingredients of course, but the creaminess of the cheese goes well with the spiced Indian roti. The selection of small plates included Bhatak ki Khurchan (£6.50) – crispy duck masala with cashew nuts, mint, watermelon, sweet and spicy drizzle and scattered with pomegranate seeds and orange segments. It was a fresh and summery dish with a lot of crunch and bursting pops of fruit. Then came the Gosht Kacchi Mirch (£8.50) – back to classic India with pot of slow braised lamb mixed with green peppers, ginger and tomatoes. The highlight turned out to be Mantu (£6.50) – spicy chicken and spring onion ravioli with chilli oil and lentil salsa. The paper-thin parcels were part-ravioli, part gyoza and garnished with micro-amaranth. 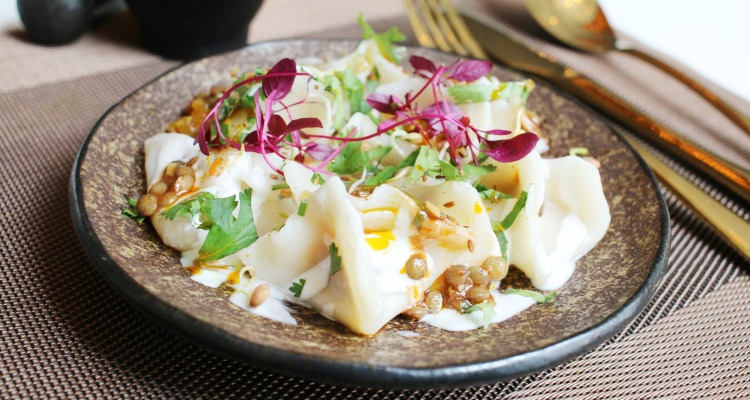 A true winner on the menu: Indian ravioli with chicken and spring onions.

It’s impossible not to draw comparisons with Dishoom, already a big-hitter on the London scene. But whereas Dishoom specialises in Bombay-style café food – Hankies is more upmarket and refined, but for a similar price point. There was one gripe though: the service was not stellar. Staff were unable to explain the menu concept and how many plates to order, as well as what some Indian ingredients and dishes were. Unfortunately they also forgot one of our main courses. With such incredible food, this was a bit of a let-down, but hopefully rectifiable. As well as faultless food, you’d be hard pressed to whinge over the prices either. Beers cost £3 for a bottle. Cocktails cost £6.50 (order two!). This is madness for central London, just don’t tell Hankies.