An Entire Restaurant Dedicated To Cheese? We Tried This Camden Hotspot

Amid the closures, curfews, and reduced seating, it feels like there’s not a lot of good news on London’s restaurant scene right now. Things are basically - for want of a better word - shit. Before we all disappear down the rabbit hole of misery, there is some positive out there, namely in the shape of a two-tier floating cheese barge arriving this November from the city’s dedicated dairy suppliers. What started as a cheese truck has transformed into a group of eateries, including the famous conveyor belt restaurant and OG The Cheese Bar - I headed down to the latter to remind myself just why these spaces are so successful. 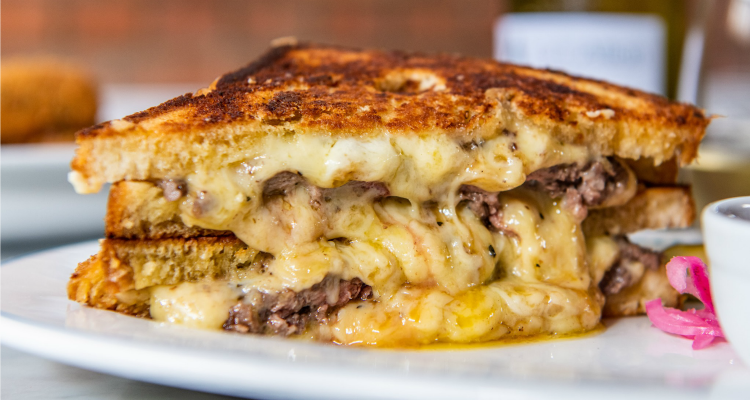 Take your toasties up to the next level at this Camden spot.

I’ve not lived in London for nearly 6 months, retreating back to the nest and country air that I’m fortunate enough to have at the first sniff I would be stuck inside for a prolonged period of time. I’d heard tales that London was dead, Prets were empty, and pubs had lost their soul, but one step into Camden Stables and it’s like 2020 hasn’t happened. The place buzzes with the unique characters that made its name; someone walks past dressed in a gimp suit - a huge dildo protruding from their mouth, while near the canal spiky haired punks shoot out an occasional hand in the hope of some loose change. The Cheese Bar is just off the main humdrum, in the newer, shiny part of the shopping precinct.

Inside, a marble bar, now surrounded in perspex, is the centerpiece - with diners sat in 2m gaps around the space, while at the head of the restaurant a large table sports six guests. The big white neon board that used to list all the cheese is still there - but is word-less, instead visitors hold their phone up to a QR code to see what’s on for the day. Despite the necessary safety measures, the place still hums with atmosphere - and slightly too loud house music, but which also has the benefit of drowning out the warbling buskers just outside. 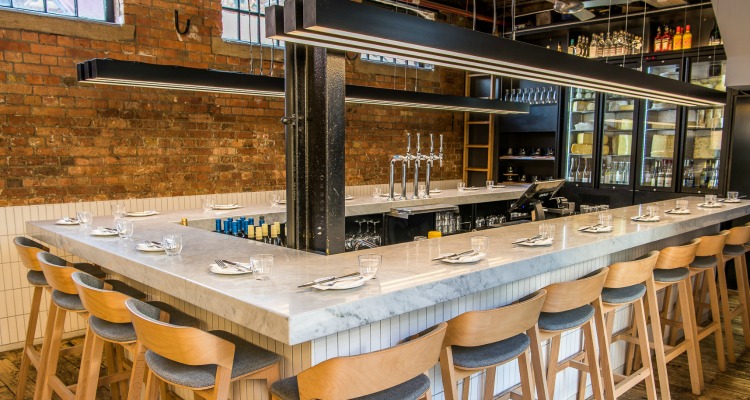 Adding to Camden's quirkiness, this spot is a retreat from the buzzing market.

As you might be able to guess from the name, cheese is the order of the day, and it seems to come in every which way. On the small plates, a ball of soft burrata (£9) from London’s La Latteria is kept light, with salad, broad beans, and a homemade sweet chilli sauce - which features all of the tang and none of the usual stickiness. The mozzarella sticks (£7.80) that were all over the ‘gram a few years ago are here, arriving in three gigantic finger-shaped portions and covered in parmesan shavings and a seasoned breadcrumb mix, which when cracked oozes with dairy. Big plates are no less satisfying and we quibble over who is going to get what before agreeing to share the burger (£10) - it's blanketed in oozing brie and shavings of truffle, between two slightly sweet brioche buns.

Goat’s cheese toastie (£9) sounds like a simple dish but with The Cheese Bar’s curd creativity becomes a scene stealer; the sourdough grilled to crunchy crispiness and a pot of honey on the side to ramp up the sweet/salty marriage of the plate. To help us digest the ungodly amount of lactose we’ve just consumed, we sink several sharp negronis - which are a steal at only £7.50 a pop, alongside sipping a Fourpure Pilsner (£5 for 2/3 pints) from their London-centric list of beers. 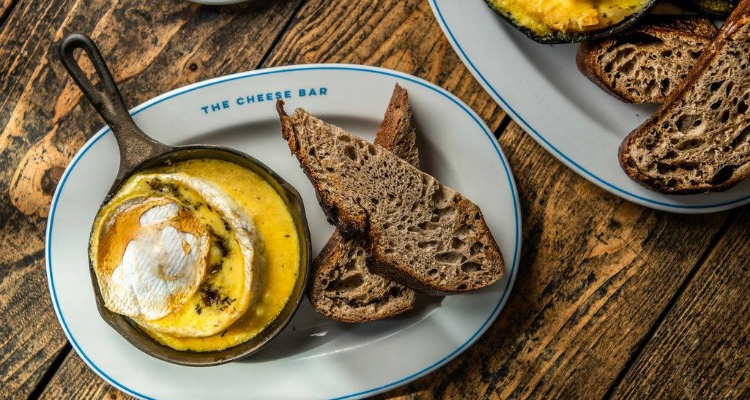 No date night is complete without oodles of dairy.

Sure, the world is burning and we're all going to hell in a handbasket - but at least we will be full of cheese. There's a reason The Cheese Bar is still thriving - and it's not just because people adore dairy - dishes here are locally sourced and deliver a myriad of delicate flavours. With autumn coming up, more doom and gloom, and potentially more measures coming our way, I know where I'm next isolating - right here.

The Cheese Bar can be found in Unit 93 and 94 Camden Market, Chalk Farm Road, NW1 8AH. For more dairy-based inspiration, check out our recommendations for fondue.