‘Craft beer’, my dad ranted recently, ‘is just ale that’s been put in the fridge with an extra couple of quid chucked on’. I have no idea whether this is true or not, but you know what, Dad? I don’t care because I love craft beer, with its wall-worthy artwork and icy cold refreshment. I’m not alone in my adoration, with most of the UK swept up in tides of the stuff as local, small-scale breweries pop-up all over the place. Long Arm Pub & Brewery on Worship Street is one such spot, which at any one time brews six original beers; I went along to try them all.

There doesn’t seem to be much that Ed and Tom Martin, the founders of the ETM pub group, can’t do. Along with a chain of renowned boozers across London, they’ve got a vineyard and have founded a brewery. Long Arm beer started life in Ealing Park Tavern and proved so popular, it’s gotten its own dedicated pub on Worship Street. The eponymous spot may be located in the same building as its sister venues Aviary and Burdock, but it feels a million miles away from their City style.

Long Arm Brewery captures what makes the craft beer movement so popular; the notoriously cool can designs have been translated into giant, street-art style murals. There’s a pool table in one corner, and only a few seats, perhaps to capitalise on standing space for the after-work crowd. Exposed metal pipes run along the ceiling and on the right-hand side, the pub meshes into the brewery with huge steel tanks churning up beer in full sight of drinkers. 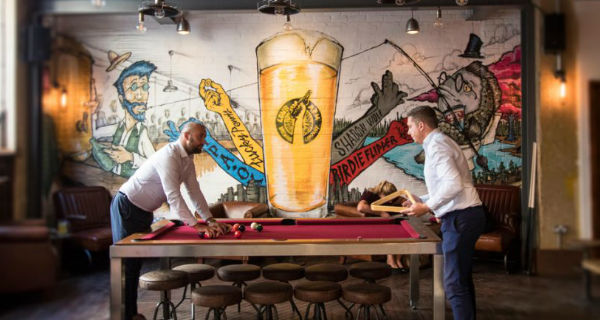 Long Arm Pub & Brewery only ever have six beers on their taps, all brewed spitting distance from the bar. That’s not to say options are limited, however, as the freshly brewed pints hit all the major categories, from chocolatey stouts through to zingy IPAs. While I might drink copious amounts of beer on a regular basis, as far as I’m concerned a hop is something you do on the playground, and malts - no bloody clue. Fortunately, the guys at Long Arm don’t just bartend, they also create and make the beer, meaning they have a personal and vested interest in each one.

They say that people who don't like beer just haven't found the right one, and with flavours ranging from a green tea-infused pint through to Shadow Wolf, a smoked stout, there's a choice for even the fussiest drinkers. Not one to stop at a simple brew pub, Long Arm also has grand designs to become London's first fully sustainable pub, which means that along with an urban farm, the venue also has a gin still on site, which creates a sharp, fresh spirit.

Food is messy and hearty enough to soak up all the beer you will inevitably end up drinking, with a list of easy burgers and sides. Coming from the misleadingly named ‘Smalls’ section, a great mound of chicken wings (£7) were coated in a sweet, slightly spicy sauce, and braised short ribs croquettes (£4) came with a chipotle mayo that I basically ended up spooning into my mouth. Finish it all off with an El Matador cocktail (£9), which is a tequila-topped strawberry dessert in drinkable form. 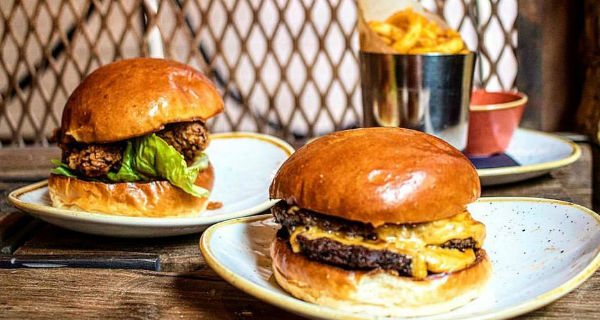 Long Arm Pub & Brewery has an American-inspired menu of burgers and small plates.