I spend most of my nights staring at the night’s sky and pondering life’s big questions (are we alone? How has no one fallen for my witty Bumble one-liners?). It’s something that runs in the family; with every meteor shower, my dad would take us to the farmer’s field up the road to watch the little bits of dust blast through the atmosphere. Peering up in East London, however, yields little results other than passing aeroplanes and that weird pollution smog glow. There is one star that’s brightening up the cold winter nights, however, and like the wise woman I am, I followed it to find The Heathcote and Star in Leytonstone.

Soft and sinkable eggshell blue chairs filled the bar and dining space, with several velvet sofas clustered around a roaring fire. A skylight stopped the deep blues feeling cold, with potted plants suspended from the ceiling and brightening the space with natural light. The Games Room is the star of the show, with a great arched ceiling that’s been painted with the zodiac constellations. Two pool tables are available to have a punt on, and when the sport isn’t showing, two ping pong tables are also available. 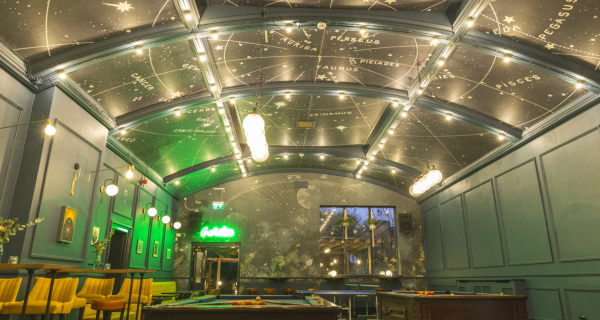 Stargaze while playing ping pong and pool at The Heathcote and Star.

We Serve Humans has been drafted in to provide The Heathcote and Star with sticky, gooey, cholesterol-rising plates that ensure you’re not able to move for the rest of the afternoon. During the week, burgers, sticky ribs and chicken wings give an American theme to the menu, but on Sundays, it’s a strictly traditional affair with a choice of four Sunday roasts.

I don’t want to exaggerate, but the roast at The Heathcote and Star was the best bloody thing I’ve ever put in my mouth. The slow-roasted Suffolk lamb (£15.50) was flakier than a Cadbury’s bar, with tender chunks of meat peeling apart at the touch of a fork. For once, veg wasn't the Robin to Batman, with a mound kale and braised cabbage packing as much of a punch. A life-raft size Yorkshire pudding soaked up gravy and duck-fat potatoes crunched on the outside to reveal cloud-fluffy insides. The true winner in all of this though was the cauliflower cheese, which had a smoky, extra cheesy flavour with an artery-thickening mix of beer, cheddar cheese and a few florets to justify the 'cauliflower' part of its name.

There’s the usual pub fare of drinks, along with some great craft beers including Camden Brewery and rotating specials on the taps. But much like the food, the venue also surprises with a knockout cocktail list of concoctions that err on the side of extremely strong; from an Aged Negroni (£8.20) to a Brave Bull (£8), made of tequila and Kahlua. 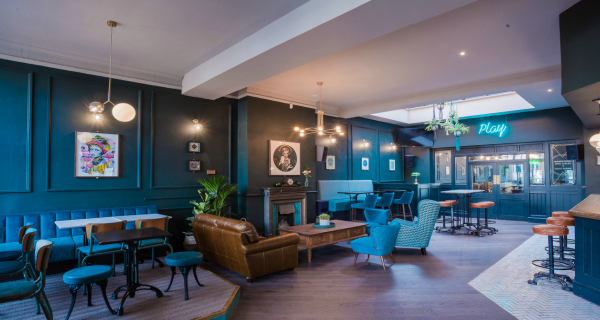 With royal blue interiors, an open fire, plenty of foliage and the bar within wobbling distance, don't blame me if you never leave the pub.

If The Heathcote and Star was my local, I would be in there every damn day. The interiors move away from the shabby chic trend that’s been rinsing East London recently, to something far more gorgeous and star-splattered. The food is also a dangerous discovery, with meat dishes that stop Veganuary intentions in their tracks.