Is this the coolest beer garden in London? We tried out the childhood themed King's Head & Courtyard

No matter what age you are, you will always have a favourite kids film that you could watch time and time again. It’s usually something Disney, it’s usually something magical, and it would usually lend itself well to a bit of interior design inspo, which is why it’s not surprising that the team at The Kings Head & Courtyard have managed to create one of the most aesthetically pleasing bars in Fulham. Drawing inspiration from their favourite childhood films, in their own words, this is a bar where nature meets mankind, where everything is not as it seems. A world so magical it will make you wish you never had to leave… so I went and put that theory to the test.

This exciting bar just north of Putney Bridge in Fulham is a bit tricky to find if you’re relying solely on the internet. It’s so new you won’t find it on Google Maps, and it doesn’t really have a sign outside, but those who have discovered it know it’s definitely the place to be on a weekend. The ceiling is covered in colourful doors (a homage to Monsters Inc) and old fashioned clocks (a reference to Alice in Wonderland) and a large tree decked out in fairy lights grows up and around the bar (for a hint of Jumanji vibes). The bar area is large with enough space to dance when the DJ gets going around 9pm, but the courtyard is even bigger with plenty of areas for groups, a table football and soon to be patio heaters to make al fresco drinking a pleasure in the winter. 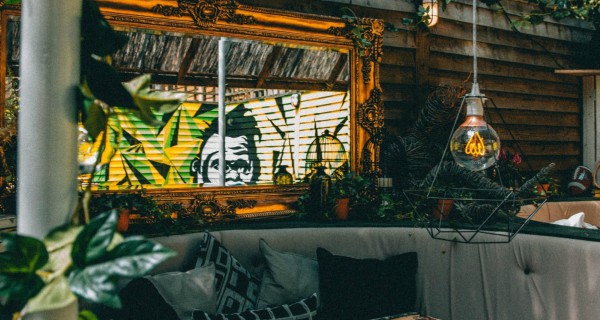 Get glugging in a Jumanji inspired beer garden.

The food menu isn’t large, in fact it consists of 3 sharing boards and 3 burgers, but one of those is a game changer in the London burger scene. It is the definition of food porn; the sexiest burger I’ve ever seen and even comes in an optional vegetarian form if you are so inclined. I am talking about their “Cheese Lover” burger (£9), a crispy deep fried camembert cheese pattie with chargrilled bacon and honey mustard. This has an ooze factor of 1000 and is decadent, rich and revolutionary. It’s not an elegant burger to eat, but gosh it certainly is heavenly. You might want to have some alone time with it, it’s that good.

In terms of drinks, we started with Crimes of Passion; a cocktail coming soon to the menu made with passion fruit, strawberry infused vodka and topped with prosecco, a bright and sweet drink served over ice in a large wine glass, before moving onto an extremely refreshing mojito and a vibrant Mai Tai which looked like a celebration of E-numbers but tasted like a tropical holiday.

We also tried one of their house specials, the King’s Planters Punch made with Appleton VX, Wray & Nephew, Orange, Pineapple, Lime & Bitters (£8) which is perfect for anyone with a sweet tooth, and our time at the bar ended with a beautiful and elegant Pink Lady which was unsurprisingly the same shade as the prettiest sunset and tasted of sweet gin. 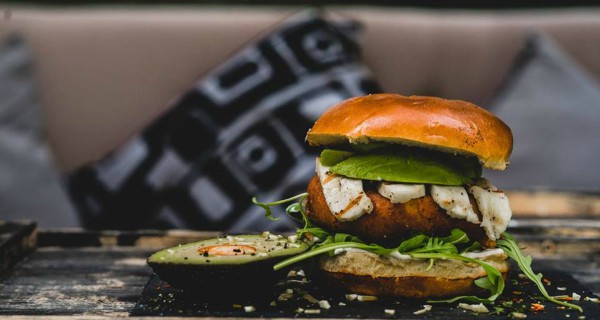 The burger menu is intimate at King's Head, but full of flavour.

With an extremely decent DJ playing a variety of old school hits and modern bangers, and a cocktail list to satisfy every taste, there really isn’t a specific clientele that is suited to this bar. Don’t be put off by the quietness of the room at the beginning of an evening - this gives you a chance you eat some dinner and enjoy company before the music cranks up and the party seekers begin to pile in, which they did as if on cue at about 9pm. The team here are super friendly, and extremely passionate about their menu and the vibe they have created, and they’re right, it’s such a magical place, you really won’t want to leave.