There's a hidden beach in Bloomsbury, and we couldn't miss the chance to visit

Excuse the cliché, but Bloomsbury is positively, well, blooming. Once the literary hub of London, where Virginia Woolf gathered her literary circle, Dalloway Terrace opened in 2016 to great fanfare, and the area has gone from strength to strength.

Montague on the Gardens is part of the Red Carnation hotel group – whose stunning interiors (think four-poster gold beds, chandeliers and velvet studded headboards) lend towards something wholly unique (and popular – featuring in TripAdvisor’s top 25 hotels in Britain). So when they launched a Beach Bar brunch, I was excited to go down to find out what I’d been missing. 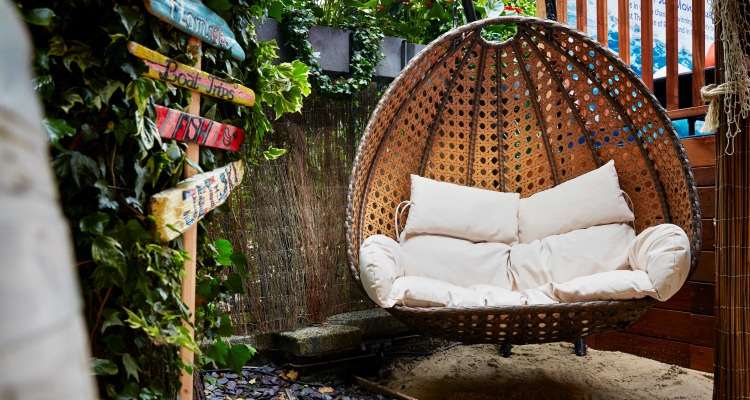 Montague on the Gardens promise a world-away pop-up.

The hotel’s interior is everything you might expect from a traditional Bloomsbury white terraced house, times 100. You walk under a billowing velvet tented lobby, through an old-fashioned drawing room decorated in objects that’d look more at home in the nearby British Museum, into a conservatory decorated entirely in leopard print (wallpaper, carpet and upholstery – even the staff wear leopard-print waistcoats) and into their new pop up beach bar which looks like the prop department of Baywatch. When Montague have a theme – they clearly don’t go by halves. The beach bar has an impressive tiki hut, jet ski with Instagram backdrop and plenty of fishing nets, Hawaiian lays and even surfboards. It’s only been open for two weeks on our visit, but a tremendous amount of effort has gone into setting up the temporary pop up.

Who doesn’t love a bottomless brunch? For two hours you’ll get unlimited refills from a list of cocktails that include Sex on the Beach, Mimosas and Piña Coladas. Our glasses were never empty and the service was attentive. Finger food came on a slate and included a fun-filled mix of crumbly black pudding scotch egg, mini chicken and bacon burger, fried Camembert with cranberry sauce and Cumberland sausage with red onion chutney. Delicious, interesting and steering away from the avocado norm, it's beach-tapas with a twist. 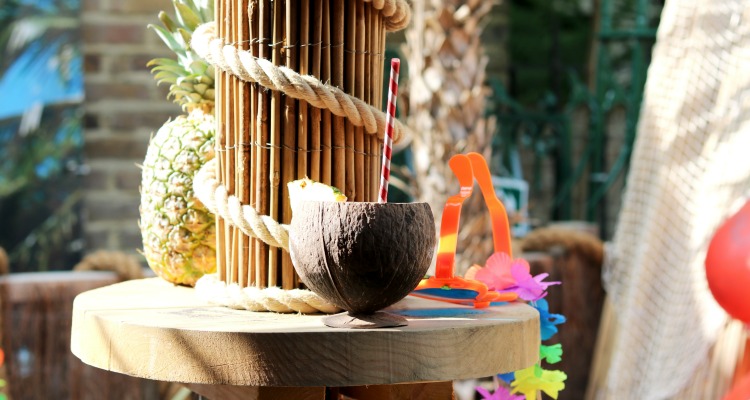 It's cute, it's delicious, it's a cocktail, and it's in a coconut.

If you’re a fan of a well done and hearty theme, this is the brunch for you. And while it isn't the cheapest brunch in London – £39 for the food plus the bottomless refills - value for money is second to none. Did we leave feeling refreshed? Yes. Were we full up? You bet.