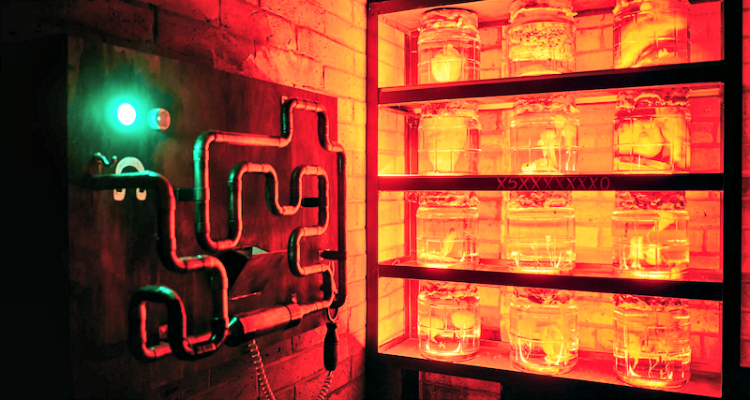 Walls adorned with instruments of torture, revealed only by torchlight.

A quick pre-game google of AIM Escape’s Psychopath’s Den returned accounts of darkened rooms, blood-stained walls and gore-caked torture instruments visible only by torchlight. So it’s safe to say that as my boyfriend, my family and I headed to try it out, tensions were pretty high (not least for my boyfriend - there's nothing like trying to escape a murderer to settle those ‘meet the family' nerves). In fact, by the time the game master asked if we had ‘any last questions or final words?’, all we could muster was a tiny squeak.

The perfect activity for thrill-seekers and adrenaline junkies alike, the next hour featured a series of mind-boggling puzzles, physical challenges and code-cracking feats. The attention to detail was pretty spectacular, and the creepiness was only intensified when the Psychopath’s voice abruptly crackled through the surrounding speakers with further riddles and clues. When my sister accidentally referred to our captor as ‘hun’? The mood was somewhat lightened...

By some miracle (and a fair few hints) we eventually managed to escape the Psychopath’s clutches with 60 seconds to spare - something only 20% of players manage - not that I’m boasting.

The hardest of AIMs four rooms, Psychopath’s Den was a spine-tingling experience that got our adrenaline pumping on an otherwise sleepy Saturday morning. The best part about making it out alive? We're already planning our return to take on the three other rooms.